Accessibility links
Lead In 'Toxic Waste Short Circuits Bubble Gum' Prompts Recall : Shots - Health News Earlier this year the gum's marketer recalled all flavors of its Toxic Waste Nuclear Sludge Chew Bars for having too much lead. Then and now, the company said it was taking action "out of an abundance of caution." 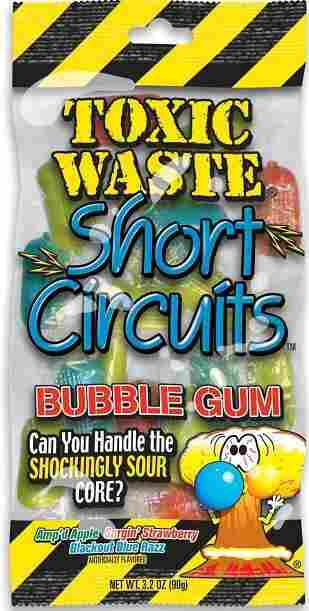 Too much lead led to a recall of some Short Circuits gum. FDA hide caption

The folks at Candy Dynamics say there's too much lead in a batch of their Toxic Waste Short Circuits Bubble Gum. So the marketer of tongue-torturing sour confections is recalling a bunch of the stuff (Lot #15070SC12 to be precise) sold from early in January until March 18th.

The affected gum was sold in 3.2 ounce packages. Food and Drug Administration tests found 0.189 parts per million of lead, a truly toxic metal. That amount is almost twice the FDA limit for lead in candy — 0.1 parts per million.

Just to be perfectly clear, the company says there haven't been any reports of anyone getting sick from the gum, which was sold all over the United States. But too much lead can pose a health hazard for babies, small kids and pregnant women.

Earlier this year the Indianapolis-based company, which imports the gum and other candies from Pakistan, recalled all flavors of its Toxic Waste Nuclear Sludge Chew Bars for having too much lead. Then and now, the company said it was doing so "out of an abundance of caution."