Accessibility links
Together, Caffeine And Booze Impair Judgment More Than Booze Alone : Shots - Health News Drinkers of a Red Bull-and-alcohol concoction said they felt twice as alert as those drinking alcohol alone. But researchers say that combination may make drinkers lose the ability to know when to stop drinking. 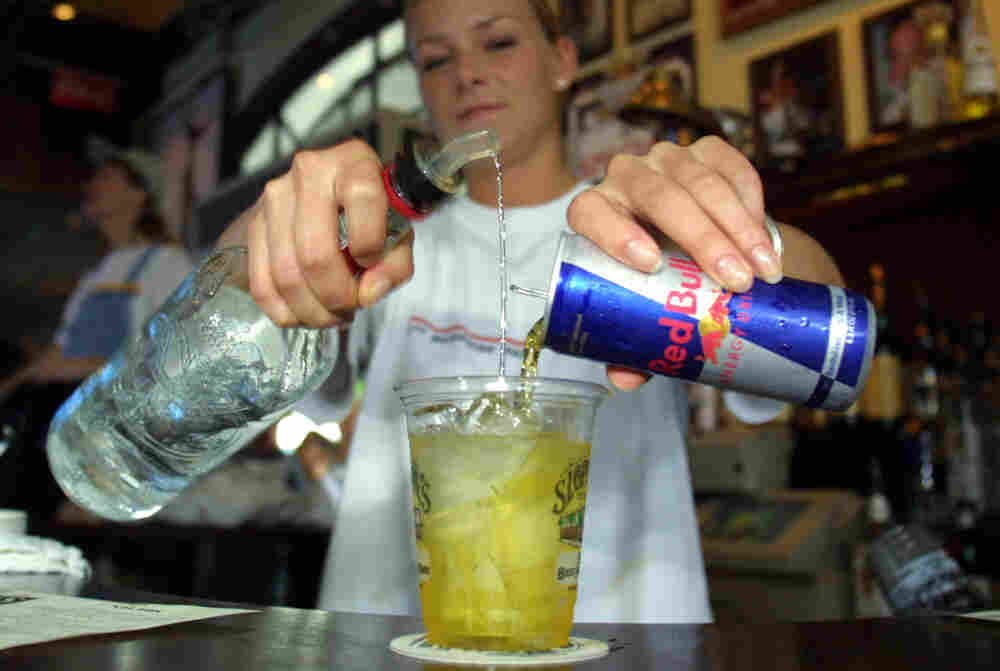 A bartender mixes a Red Bull energy drink with vodka in Key West, Fla. A can of Red Bull has more than double the caffeine of a can of coke. "It changes how you experience the drink," a psychologist says. Joe Raedle/Getty Images hide caption 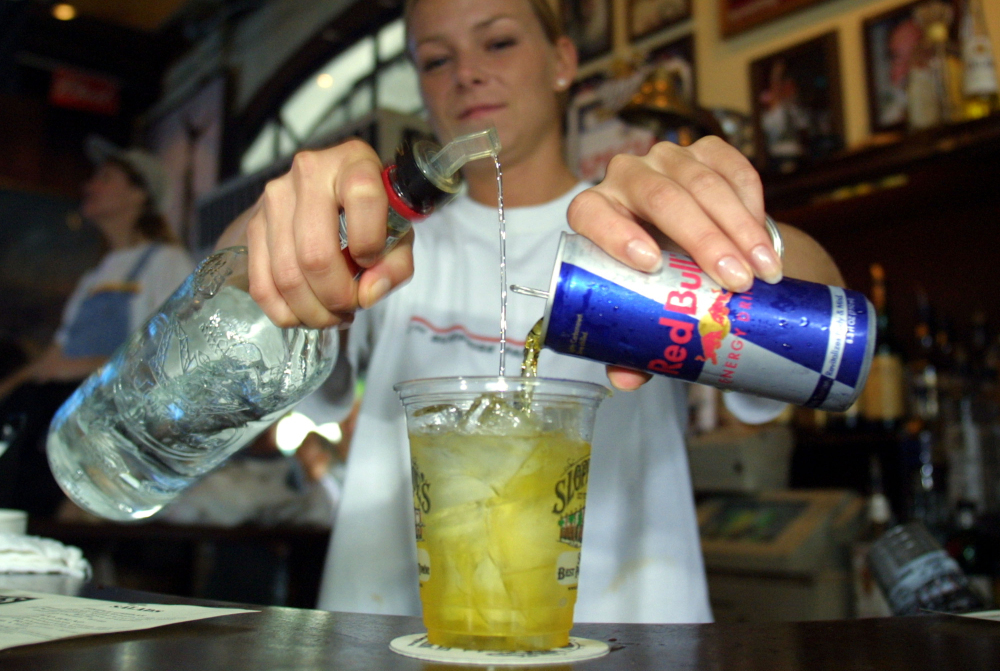 A bartender mixes a Red Bull energy drink with vodka in Key West, Fla. A can of Red Bull has more than double the caffeine of a can of coke. "It changes how you experience the drink," a psychologist says.

The vodka Red Bull, or VRB, has become a favorite cocktail among some young revelers. (One fan even made a video homage, to the tune of Rupert Holmes' 1979 hit "Escape:The Piña Colada Song.") But scientists say that tipplers of caffeine-laden energy drinks mixed with alcohol may have a tougher time knowing when to stop than those who imbibe booze alone.

Researchers at Northern Kentucky University tested students' reaction times while drinking Red Bull with vodka. The students who drank the buzzy cocktail felt more alert and peppy than students who were just quaffing vodka, but were just as bad at controlling their actions as an old-fashioned drunk.

"When you consume alcohol plus an energy drink, you're still as impaired" as someone drinking just alcohol, says Cecile Marczinski, an assistant professor of psychology at Northern Kentucky University. She is lead author of the study, published online in Alcoholism: Clinical and Experimental Research.

In the study, the Red Bull and alcohol drinkers said they felt twice as stimulated and alert as those drinking alcohol alone.

"That sets up a risky scenario for the drinker," Marczinski told Shots. "You're not accurately assessing how drunk you are."

Alcohol acts like a stimulant when people first start drinking it; that happy buzz makes alcohol the world's most popular recreational drug. But as people keep drinking, they start getting tired and sleepy. "That's the cue to stop drinking," Marczinski says. But when amped up on caffeine, "the cue to tell you to stop is not there."

While there's been lots of anecdotal evidence that the combo is more dangerous than alcohol alone, there hasn't been a lot of science nailing down the difference in behavior.

Last November, the manufacturers of Four Loko agreed to strip the caffeine out of the potent alcohol drink after the Food and Drug Administration made noises about regulating sales of alcoholic energy drinks. Four Loko is a sweet and fruit-flavored caffeinated beverage with a hefty 12 percent alcohol content; it had been linked to hospitalizations and deaths among young drinkers. At the time, the co-founders of Phusion Projects, makers of Four Loko, said their product was no different than a rum and Coke or an Irish coffee.

But drinking alcohol and an energy drink together is different, the researchers say, because the caffeine content in most energy drinks is higher than that in soft drinks, and the high schoolers and college students who favor and are marketed the combo are more likely to drink a lot. An 8.3 ounce Red Bull has 76 milligrams of caffeine, compared to 35 milligrams in a 12-ounce can of Coke.

"It changes how you experience the drink," Marczinski says.

The bottom line: Drinkers shouldn't trust their judgment, and drinkers who include energy drinks in the mix should be even more skeptical.