Accessibility links
Sugar May Be An Empty Nutrient, But Is It Poisonous? : Shots - Health News Sugary foods can lead people to pack on the pounds. But there's scant science behind claims that sugar directly causes cancer, heart disease, and high cholesterol.

Is sugar toxic? That's the diet and health question of the week, thanks to a New York Times Magazine article that answers with a vituperative yes. But the case on sugar's guilt as Health Enemy No. 1 isn't so clear. 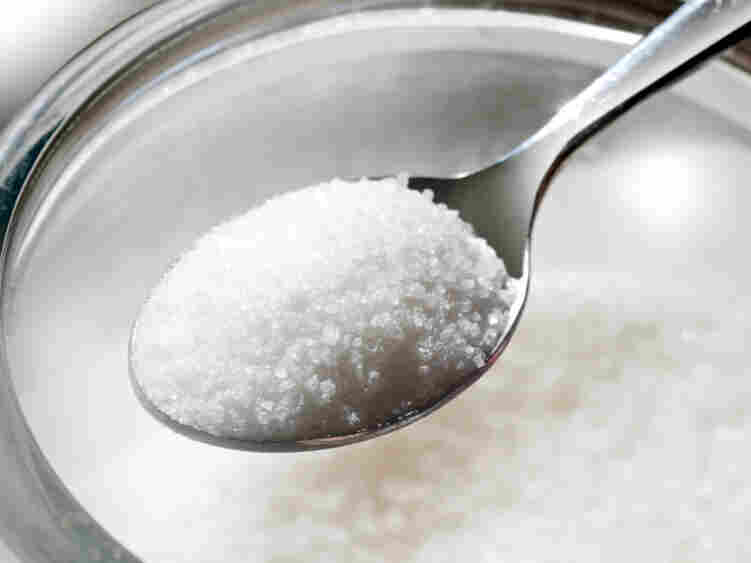 There's good evidence that people who consume a lot of sugar, particularly if it's in soft drinks, energy drinks, and juices, are more likely to be overweight or obese. In one study, teens who quit drinking sugared soda and juices lost a pound a month over six months.

Eating lots of sugar can contribute to the development of fatty liver disease, which can lead to cirrhosis and sometimes a liver transplant. As a nutrient, sugar is pretty lame, delivering calories but none of the vitamins, minerals, fiber and other good stuff bundled in sweet foods like apples, oranges and kiwis.

But the new anti-sugar brigade blames the sweet stuff not just for making people fat, but for causing cancer, heart disease and high blood pressure. The New York Times article relies heavily on the work of Robert Lustig, a pediatric endrocrinologist at the University of California, San Francisco who faults fructose for many of our ills. But the article is just the latest salvo in the attack on sugar, which includes books like Sugar Shock, Suicide by Sugar, and Sugar Blues.

The bottom line: researchers are still trying to figure out how different forms of sugar are processed by the body, and can't say for sure that one is worse than another. Even Dr. Lustig admits that an apple is good for you, though it's chock-full of fructose. (He says the fiber makes it kind of OK.)

The sugar diatribes serve as a reminder that demonizing one nutrient does not a healthy person make. For example, when fat was blamed for obesity and heart disease in the 1980s, people gobbled up fat-free cookies — and gained weight. Antioxidants like vitamin E were thought to be potent protectors against cancer — until research revealed that taking vitamin E supplements actually increased the risk of cancer.

Scientists increasingly think that what makes fruit and vegetables so healthful is a complex interplay of nutrients that can't be replicated in a pill.

But blaming one nutrient does have the appeal of simplicity. Who doesn't love a villain? Gary Taubes, the journalist who wrote the Times article, specializes in covering these single-nutrient controversies, having spent most of the past decade defending high-fat, low-carb diets like the Atkins diet. Taubes is a big proponent of those diets himself. Here's his typical daily intake, as posted on his personal blog:

Keep in mind as you go through these that I do indeed eat three eggs with cheese, bacon and sausage for breakfast every morning, typically a couple of cheeseburgers (no bun) or a roast chicken for lunch, and more often than not, a ribeye or New York steak (grass fed) for dinner, usually in the neighborhood of a pound of meat.

Americans should eat less sugar, but there's no conclusive evidence that sugar is the root of all our ills.