Accessibility links
Pediatricians To Feds: Protect Kids From Toxic Chemicals : Shots - Health News Parents worry about exposing their children to chemicals like BPA, but nobody knows for sure what they do. That's because current law doesn't require that chemicals be tested for safety before hitting the market. The American Academy of Pediatrics wants the EPA to change that. 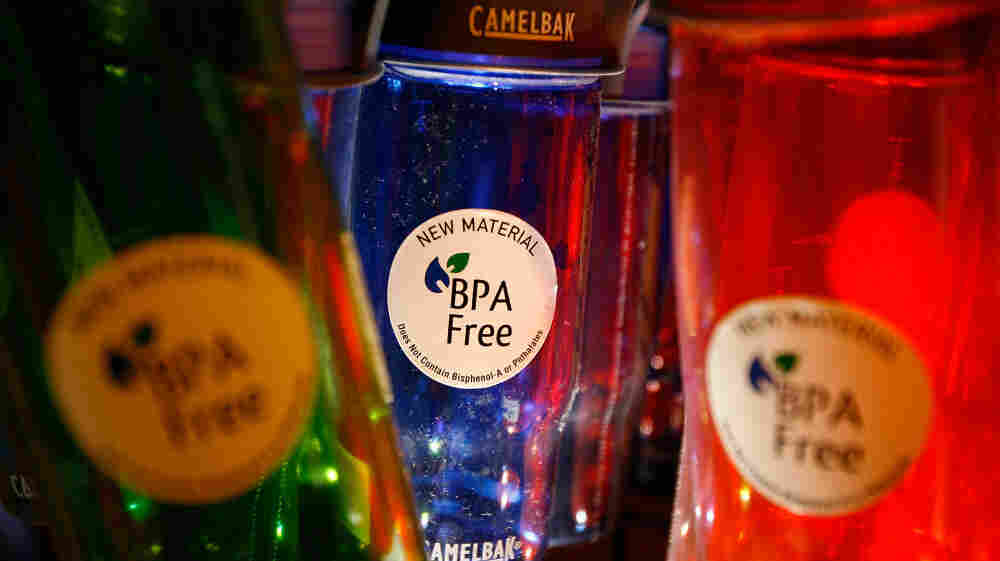 Are BPA-free bottles really safer than the ones that are chock-full of bisphenol A? Good luck trying to find out. David McNew/Getty hide caption

It seems like every week there's another scary-sounding chemical intruding into our lives: Bisphenol A in baby bottles, phthalates in plastic food containers, PBDE flame retardants in furniture and electronics, triclosan in soaps and shampoos.

But good luck trying to figure if those chemicals actually put your family at risk.

If you're tired of the lack of solid information on the health effects of chemicals — well, the nation's pediatricians are tired, too. They think the Environmental Protection Agency is doing a crummy job of protecting children and pregnant women from chemical health threats. And they're calling for a major redo of the nation's law regulating the 80,000 or so chemicals in use.

"I think there are many, many chemicals in many, many products on the market that are safe," says Jerome Paulson, a pediatrician and Children's National Medical Center in Washington, DC. He's the lead author of a new policy statement from the American Academy of Pediatrics, asking the federal government to redo the country's 35-year-old Toxic Substances Control Act. "But I say that as a leap of faith."

The problem, Paulson told Shots, is that none of us know which chemicals are safe and which are health threats, because chemicals don't have to be tested for safety before they're used in consumer products.

The pediatricians want chemicals to be tested for safety before they come on the market, the way prescription drugs are now. They also want to see a post-market surveillance system, like there is for medications, so that if health problems do start cropping up, there's a way to monitor them and respond. Most of all, they want the feds to recognize that chemicals may pose very different threats to children than they do to adults.

Kids' bodies are not like adult bodies. Children also live differently than adults. A 9-month-old spends her days on the floor, picking up things and chewing on them. And that child's physical response to chemicals in the environment changes as her body changes.

It won't be easy to figure out the interplay between children's development and thousands of chemicals. So the pediatricians are starting with a call for tighter regulation of chemicals that already spark "reasonable levels of concern."

That's different than the current system, which requires the government to prove that a chemical poses an "unreasonable risk" to limit its use. As a result, the EPA has required safety testing of only about 2,000 chemicals, and has restricted use of just five: PCBs, chlorofluorocarbon propellants for aerosol cans; dioxin; asbestos; and hexavalent chromium.

"The current level of proof is so high it's essentially been impossible to protect the public from chemicals that are clearly harmful," Paulson says.

A spokesman for the American Chemistry Council, an industry association, told Shots that the Toxic Substances Control Act, or TSCA, does need to be modernized. An ACC spokesman said that in the interim, "there are a whole host of regulations and programs in place to address the safe use of chemicals and protect public health."

A bill to reform TSCA, introduced by Sen. Frank Lautenberg (D-NJ) and four other Democratic senators earlier this month, would give the EPA the power to get safety information from manufacturers, and investigate high-risk chemicals first.