Accessibility links
Mysterious Leprosy Cases Linked To Armadillos : Shots - Health News Genetic studies have confirmed that some humans handling armadillo meat contracted a never-before-seen strain of the bacterium that causes leprosy. The armadillo is the only animal, besides humans, that is known to carry the bacterium. 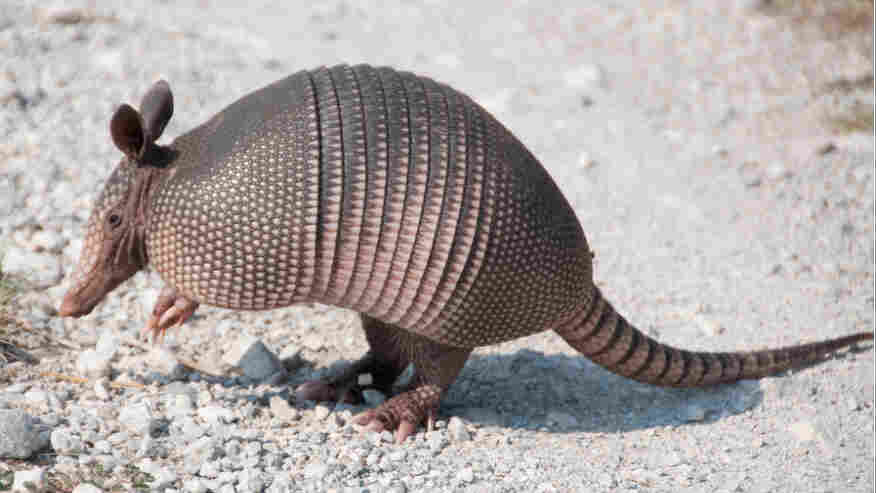 The armadillo is the only animal, besides humans, that is known to carry leprosy-causing bacteria. Richard Anderson/Flickr hide caption 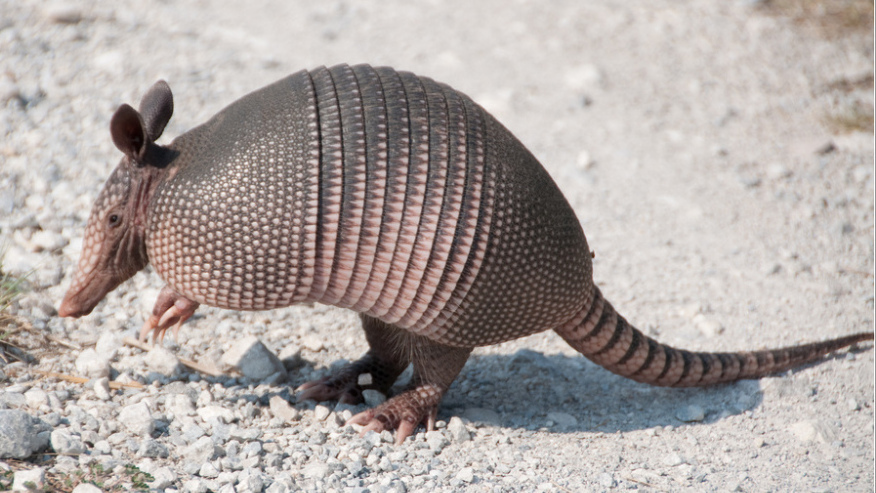 The armadillo is the only animal, besides humans, that is known to carry leprosy-causing bacteria.

Every year, about 150 Americans are diagnosed with leprosy, a disease that disfigures the skin and affects the nervous system. Two-thirds of these people pick it up while traveling overseas, but the source of the remaining third has long been a mystery. Where did these patients, most of them from Texas and Louisiana, catch leprosy?

Research published Wednesday in the New England Journal of Medicine points strongly to an unlikely source — the armadillo.

Leprosy, also known as Hansen's Disease, was first found in armadillos in the mid-1970's; researchers at the National Hansen's Disease Clinical Center in Baton Rouge, Louisiana have long used the animal to study the disease. Richard Truman, the study's lead author and director of microbiology at the center, tells Shots that for years, scientists have speculated that armadillos might transmit the disease to humans.

In the NEJM study, Truman and his colleagues in the U.S. and at the Swiss École Polytechnique Fédérale de Lausanne used several genetic markers to analyze strains of Mycobacterium leprae, the bacteria that causes leprosy, in humans and armadillos in the U.S. and South America.

Some of the American leprosy patients had familiar strains that have shown up in other countries, but others had a never-before-seen strain that was also found in American armadillos. The researchers concluded that wild armadillos and many patients with leprosy in the southern United States are infected with the same strain of M. leprae.

This discovery has led some to compare leprosy to other infectious diseases that leaped from animals to humans. Many speculate that flu came from water fowl, and it's pretty well-established that HIV came from chimpanzees. But with leprosy, the opposite is true. We infected them.

Truman says there was no leprosy in the New World until European settlers arrived. Somehow armadillos contracted the disease, and now about 15 percent of armadillos carry it. They are ideal hosts, because M. leprae likes their low, 89-degree body temperature. It can't thrive at a human's core temperature, which is why it only attacks our cooler extremities.

"Leprosy is not a very robust pathogen," Truman says.

For these reasons, Truman says the risk of contracting leprosy from brief contact with an armadillo, or even from moving armadillo roadkill, is low. In the rare case that you do pick it up, antibiotics usually kill it.

The more likely path to infection is by noshing on armadillo. "People become infected because of direct contact with raw armadillo flesh that has been butchered in some way or another," he says.

Truman hopes his research will encourage doctors to consider the possibility of leprosy when diagnosing patients with its symptoms, even if they haven't been out of the country. So, a small number of patients in the South may be hearing the question: have you ever met an armadillo?