Accessibility links
Jamie Oliver Helps Get LA Schools To Ax Flavored Milks : Shots - Health News Jamie Oliver has been chastising the LA Unified School District for serving flavored milk on the current season of his television show. A glass of flavored milk has much sugar as a can of soda and kids drink a lot of it at school. 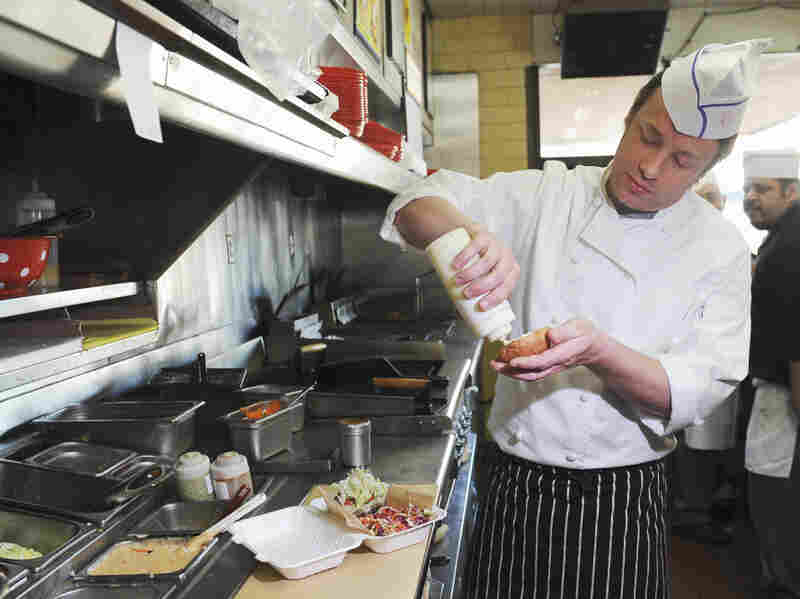 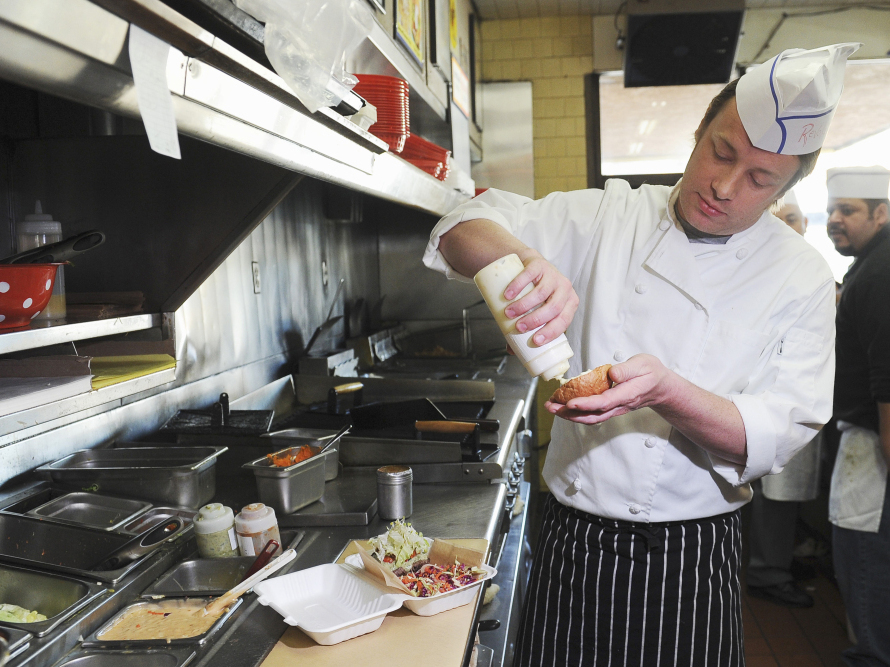 Jamie Oliver during a scene filmed in Los Angeles from the second season of "Jamie Oliver's Food Revolution" on ABC.

Jamie Oliver, the celebrity chef turned school lunch crusader, has been beating the drum against flavored milk for a while now on his show "Jamie Oliver's Food Revolution." In recent weeks, he's shown how much sugar is added to it by filling up a school bus in Los Angeles — where this season of the show is set — with 57 tons of white sand.

Chocolate and strawberry-flavored milk has as much sugar as a can of soda — and kids drink a lot of it at school through government-subsidized school lunch programs.

This week, in a rare joint appearance after some tense weeks of sparring, Oliver accompanied the Los Angeles School District's superintendent John Deasy on "Jimmy Kimmel Live!" to announce the ban on flavored milk in L.A. schools. Deasy says he plans to recommend the ban to the Board of Education by July, and that the milks will be out of schools by the fall.

Oliver can no doubt take some credit for the decision, though as the Los Angeles Times reported, L.A. Unified had been considering doing away with flavored milk for a while. Oliver's foundation has been organizing parents and students to write letters to Deasy and the board demanding healthier lunches. The district has gone on the defensive, claiming Oliver's disparagement of its menus was misleading.

L.A. Unified was one of the first school districts in the country to ban sugary soda in its schools in 2002, but there's still a lot of sugar on the menu. A current school breakfast menu there includes Frosted Flakes, coffee cake, chocolate milk and orange juice. That lineup contains 51 grams of added sugar, or 13 teaspoons, according to Oliver's foundation.

Oliver and Deasy made nice on Kimmel, but ultimately Oliver lobbed the school lunch problem back to parents, punctuating it with a characteristic naughty-boy expletive. "We've got a good man here, but he's got a lot of things to worry about," Oliver said. "The parents of L.A. and America need to start giving a %$# about what we feed kids."

The dairy industry, meanwhile, continues to defend flavored milk with campaigns like the "Raise Your Hand for Chocolate Milk."