Accessibility links
Massive Clean Up Is No Cure For Hoarding : Shots - Health News Researchers are finding that hoarding worsens with age. They're also learning that one of the best ways to help hoarders is to slowly build trust and organizing skills, rather than doing massive clean-outs. 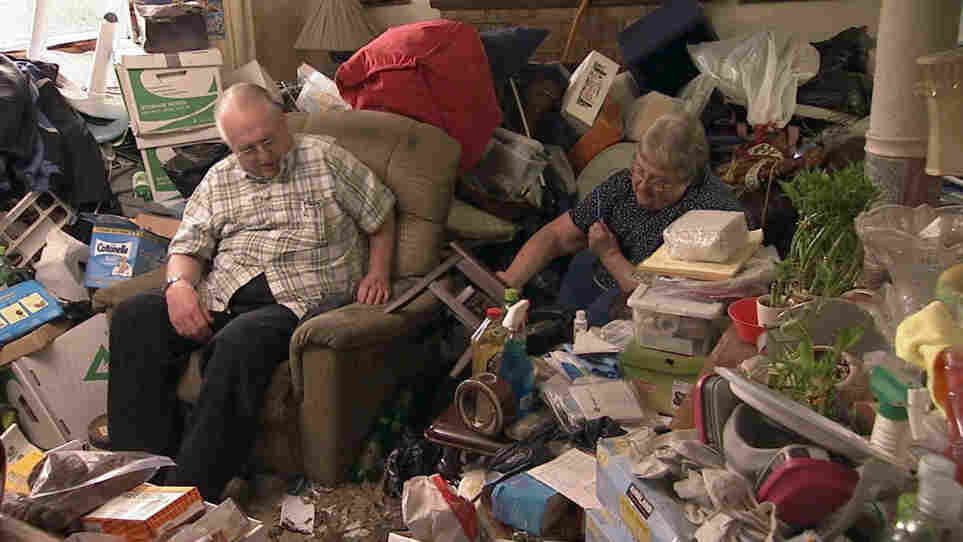 Gordon and his wife from the season premiere of the A&E show Hoarders. (A&E doesn't fully identify people who get treatment through their show.) AP hide caption 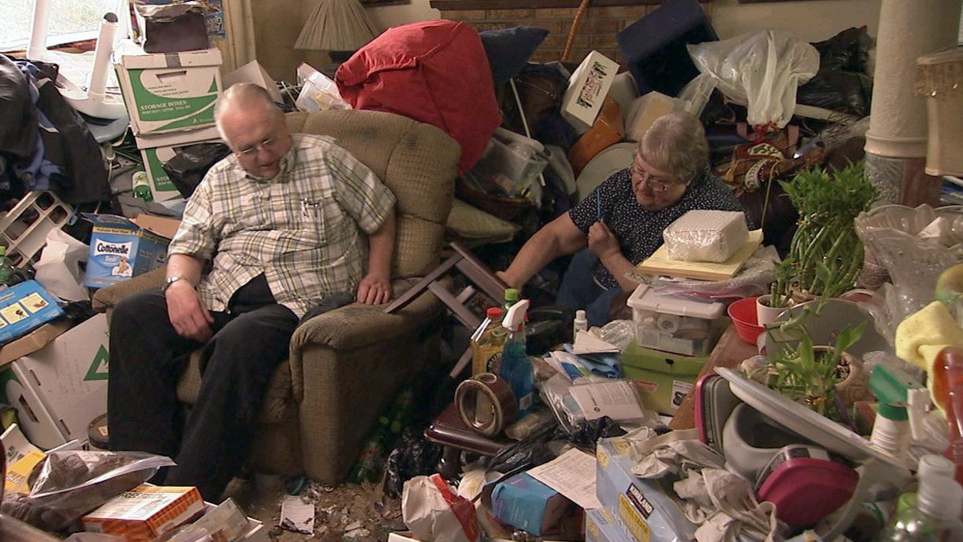 Gordon and his wife from the season premiere of the A&E show Hoarders. (A&E doesn't fully identify people who get treatment through their show.)

If the popularity of the cable television show Hoarders is any indication, we have a fascination with hoarding.

"We all love a good train wreck," says Mark Odom, clinical consultant to the Orange County (Calif.) Task Force on Hoarding. And, he says, many people — including psychiatrists — think hoarders are obsessive-compulsive. It's even listed that way in the bible of psychiatric disorders, the DSM IV.

But this isn't necessarily true, according to several studies presented at the annual conference of the American Society on Aging, which wrapped up this weekend in San Francisco. Hoarders are more likely to be depressed, anxious or have social phobias than to have obsessive-compulsive disorder.

And the problem worsens with age.

University of California, San Francisco researcher Monika Eckfield studied 22 older adults and found that changes in their social environment created boredom and isolation. So, for some, shopping became a socially-appropriate way to interact with the world. And then, they didn't get rid of anything after they brought purchases home.

All 16 women and six men described "blockages," with no motivation to discard many things, though no one kept everything. One woman said her house was "constipated," Eckfield reports.

And the hoarding was not because they had lived in the same place for decades. Even people who moved in the last five to 10 years didn't purge when they moved. They hired helpers, who packed, moved and then stacked boxes.

Eckfield said their homes "looked like storage lockers." In fact, because they seemed to lack the capability or help to unpack, and then they couldn't find things like kitchen supplies, they went out and bought even more stuff.

In the March issue of the International Journal of Geriatric Psychiatry, R. Scott Mackin, also from UCSF, and a team of researchers found that about 15 percent of older adults with depression had "severe compulsive hoarding behaviors," while just 2 to 5 percent of non-depressed older adults are hoarders.

He notes that both depression and hoarding are "frontally mediated." That is, both seem to affect the frontal lobes of the brain, which are associated with planning, motivating and organizing.

The hoarders Mackin studied had much more trouble categorizing objects (such as sorting cards based on color or shapes) and solving problems. These "cognitive deficits" need to be taken into account before intervening to clean out the hoarder's home, the team concluded.

Christiana Bratiotis, director of the Hoarding Research Project at the Boston University School of Social Work, says cognitive behavioral therapy can help. Prior to a recent study the school did with the Elder Services of Merrimack Valley in Massachusetts, the agency used only big clean ups to clear the clutter. She said 100 percent of the time, the elders began hoarding again immediately. And they were angry, distressed and distrustful of anyone (family members, social workers) who tried to intervene again.

For their study, social workers visited 26 people, ages 60-90, weekly for up to a year. They found that the older adults described themselves as pack rats or collectors, not hoarders. The social workers worked with them slowly, to reduce the mistrust and to build organizing skills.

They put the hoarders in control of all the decision-making, except eliminating imminent risk (such as papers on the stove) and found that by the end of the year, most could tolerate incremental changes and none had been evicted.

That squares with the Orange County task force's experience. Mark Odom notes that an effective strategy for them is to emphasize "harm reduction." He said by invoking regulation enforcers, such as landlords or fire departments, hoarders had "exterior motivation" to clear at least some of the clutter.

"It's about house safe and functional," he said, "not house beautiful."