Accessibility links
When Bikes And Cars Collide, Who's More Likely To Be At Fault? : Shots - Health News On the surface, cars seem more likely to collide with bikers than the other way around. But when Shots looked at data from the few states where it's available, cyclists seem almost as likely to cause accidents as motorists. 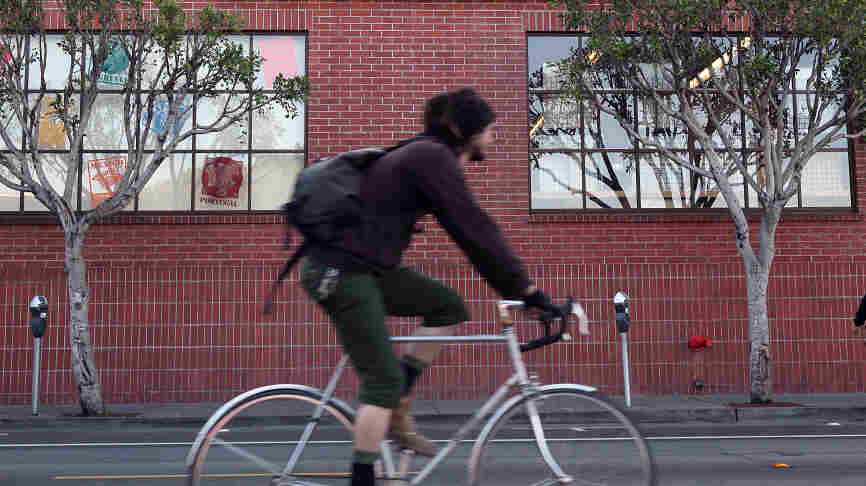 A bicyclist on the move in San Francisco. Justin Sullivan/Getty Images hide caption 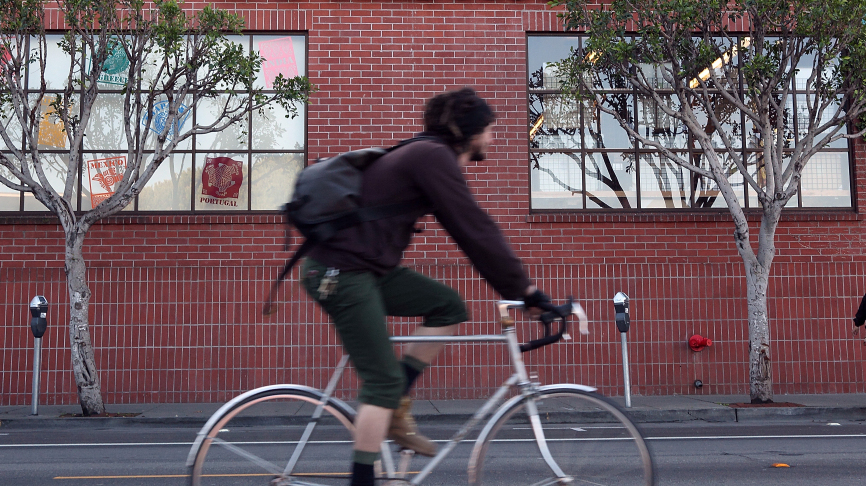 A bicyclist on the move in San Francisco.

Many of us here on NPR's Science Desk bike to work, and not just on Bike To Work Day. And like bike commuters everywhere, we delight in grumbling about the cars, trucks and buses that cut us off, drift into our lanes and honk at us.

But we'll also, mind you, tut tut at the cheeky fellow bikers who swoosh recklessly through red lights, speed down sidewalks and block crosswalks.

The tension between bikes and vehicles is evident on the streets of Washington, D.C., every day, and as bike-sharing programs allow more riders to take to city streets, more angry — and injurious — confrontations seem inevitable.

Cycling is still a relatively dangerous activity, after all. There were 630 fatalities and 51,000 injuries from bike-motor vehicle traffic crashes in the U.S. in 2009, according to the National Highway Traffic Safety Administration.

But who is really more likely to be at fault when bikes and vehicles collide?

The federal government, for one, doesn't know. "Fault is difficult to determine," a spokeswoman for the Federal Highway Administration tells Shots. Her office has never produced national data answering this question.

Cars do seem the more likely culprit since they're bigger, more powerful, and sometimes at a disadvantage spotting the spindly cyclists who dart around city streets, where most accidents happen. But when we looked at data from the few states where it's available, cyclists seem almost as likely to cause an accident as motorists.

Ed Beighe, who mans the Arizona bike blog Azbikelaw, crunched some numbers on fault from his state and found that 44 percent of fatalities from bike-car crashes in 2009 were determined to be the fault of the cyclist, while 56 percent were the fault of a motor vehicle driver. The most common collision was when a driver struck a cyclist from behind.

The Minnesota Department of Public Safety published data on contributing factors in bike-car crashes. It found that in 2009, cyclists were at fault in 49 percent of crashes, while drivers were at fault in 51 percent. Failing to yield to right of way was the most frequent cause of the snarls.

And the Washington Post recently mentioned a 2004 report from DC showing cyclists more likely than motorists to be at fault in a crash.

Cities and states vary greatly in terms of their infrastructure, topography and bike friendliness, Libby Thomas, with the University of North Carolina Highway Safety Research Center, tells Shots. So in the end it's pretty hard to draw any big conclusions about who ultimately errs more.

Still, both drivers and bikers could stand to take a few more safety precautions on the road. We highly recommend Bicycling's graphic of the 5 most common bike-car collisions as a refresher on what to be wary of, whether you're behind the wheel or the handle bars.