Accessibility links
U.S. Mulls Implications Of Early Use Of HIV Drugs To Stop AIDS Spread : Shots - Health News Findings from a recent study suggest that if all the HIV-infected people in the world got antiviral drugs, the 30-year-old pandemic could be brought to heel. Now the administration's chief AIDS strategist is leading a what-if discussion about that tack.

U.S. Mulls Implications Of Early Use Of HIV Drugs To Stop AIDS Spread

U.S. Mulls Implications Of Early Use Of HIV Drugs To Stop AIDS Spread 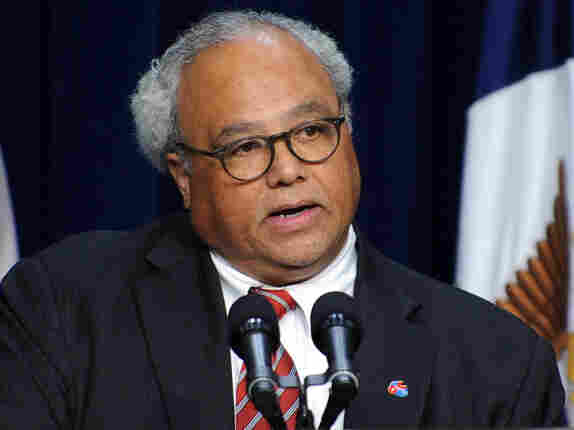 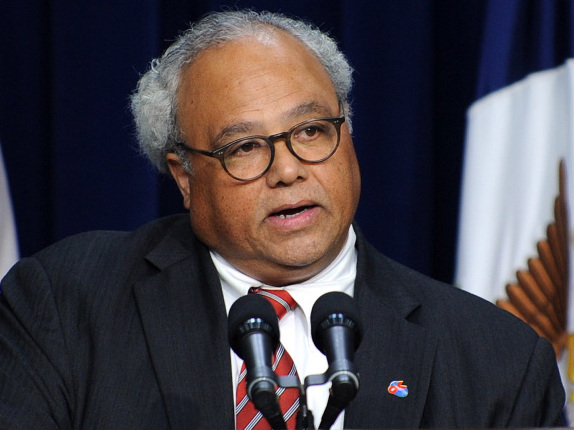 U.S. Global AIDS Coordinator and Ambassador Eric P. Goosby speaks on HIV/AIDS during an event at the White House in November 2009.

The Obama administration is beginning to think through the ramifications of what may be the most far-reaching AIDS study ever done.

Earlier this month federal officials announced the results of a big clinical test that showed if HIV-infected individuals get antiviral drugs early — while they still feel fine and their immune systems are intact — their chances of passing the virus on to someone else go down to almost zero.

The implication: If all the HIV-infected people in the world got the drugs, the 30-year-old pandemic could be brought to an end. Nobody expects that to happen overnight, maybe not ever. But the administration's chief AIDS strategist is leading a what-if discussion within the government.

"This is a study that needs to challenge the way we've been doing business," says Dr. Eric Goosby, who holds the title of Global AIDS Coordinator and the rank of ambassador.

"We need to ask ourselves if this indeed presents an opportunity for us to be more effective in preventing new [HIV] infections," Goosby told a small group of reporters Wednesday. "What I'm now committed to doing is shepherding the dialogue within the U.S. government — to go quickly, but I want to do it consciously."

The issues involve vast amounts of money, at the least. The President's Emergency Plan For AIDS Relief, of PEPFAR, which Goosby oversees, now spends almost $7 billion a year. U.S.-funded programs will soon have almost 4 million people under treatment in 88 countries, from Haiti to Botswana to Vietnam.

Putting the new study's results into practice would involve treating almost nine times more people. That would be costly and logistically daunting.

But, Goosby says, ethical issues loom just as large. "How do we deal with ... prioritizing who gets on antiretroviral drugs first?" he asks. "Should it still remain patients with late-stage disease, pregnant women, patients with pulmonary TB, children diagnosed at birth? Or should anybody, regardless of the stage of disease, get treated?"

He also sees a conflict between medicine and public health. "As a physician your responsibility is to the patient in front of you," Goosby says. "That patient has to believe ... that you as a physician, always and every time, do what is in the patient's best interest."

But Goosby says it's not yet clear that it's in the patient's best interest to put them on a lifetime course of powerful antiretrovirals, when their immune systems are still intact. Even if it lowers their risk of infecting someone else by 96 percent, as the new study shows.

Although Goosby's current purview is global, he still thinks like a doctor. As next month's 30th anniversary of the AIDS pandemic approaches, he remembers what it was like to be a San Francisco AIDS doctor in the early days.

"There were 15 to 30 who died each week," Goosby says. "You don't get attached to every patient the same way. But every once in awhile you have a patient you relate to on multiple levels. And you grieve their loss."

About seven years into the pandemic, Goosby and his co-workers "all began to have more emotional lability than any of us had ever had before." Seeing a stray dog on the street would make him tear up. It got worse after the birth of his first child, a boy.

"I realized that every one of these patients I'd been with was somebody's son for the most part — boys, young men," Goosby says. "And they had parents who loved them as much as I loved my son. And it put me through this kind of crescendo moment."

Goosby says he personally lost 500 patients to AIDS. Three decades later, now that good drug regimens are available, he's trying to save the lives of millions.

In that interval, a CDC spokeswoman tells Shots, more than 600,000 Americans have died of HIV-related disease. Around the world, a World Health Organization official says, the toll has reached 30 million.