Accessibility links
FDA Proposes Graphic Warnings For Cigarettes : Shots - Health News The agency unveiled large, dramatic health warnings that would be required on cigarette packages and in advertisements to discourage people from smoking. 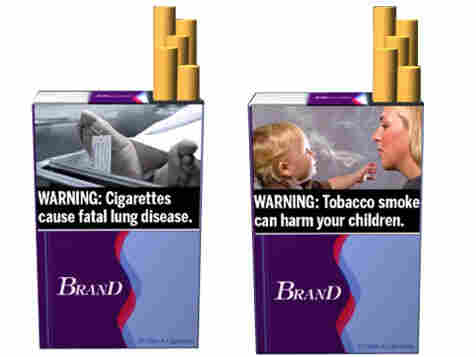 Now that the Food and Drug Administration has broad powers to regulate tobacco, it's starting to flex its muscles.

Today, the agency unveiled a proposal that would add large, dramatic warnings to cigarette packages and advertisements in a move to discourage people from smoking.

The Tobacco Control Act requires the FDA to come up with regulations for tougher labeling of cigarettes. Now you can see the agencies' ideas and comment on them through early January. Final regulations are due next June. Tobacco companies will have until Sept. 2012, to make the changes.

Under the law, these warnings will have to appear on both the front and back of cigarette packs, taking up half the real estate on each side of the label.

In big ads, they're supposed to occupy at least 20 percent of the space. For smaller ads, there will be alternative anti-smoking messages with bright logos.

Will they work? Some research shows that bold graphic warnings do a better job than text alone in communicating risks and affecting behavior. Other countries, such as Canada, have blazed this trail already.

As NPR's Richard Knox reports on All Things Considered, David Sweanor, a law professor at the University of Ottawa, says Canada's decade-old warnings do work — up to a point.

"What we see with these sorts of warnings is that it does increase motivation," Sweanor says. "People are more aware of the risks. They are wanting to quit. But that has to be combined with services that make it more likely."

Sweanor says smoking hasn't gone down as much as Canada as they'd hoped because the government hasn't provided enough access to smoking cessation programs.

The U.S. government's new campaign, powered by a new 2009 tobacco control law, does include more coverage of quit-smoking programs through Medicare, Medicaid and private insurance. But some wonder if the funding will materialize.

Others say the scare tactics can sometimes backfire. One study that tested warnings on a bunch of smokers, who happened to be psychology students, found that when smoking was a big part of someone's self-esteem, they weren't deterred by warnings that cigarettes could kill them. In fact, paradoxically, the death warnings might make them want to smoke more.

For those people, the researchers say, it might be more effective to dent that self-esteem with messages that say things like "Smoking makes you unattractive."

Almost two decades ago, comedian (and smoker) Denis Leary poked fun at smokers' ability to ignore warnings in a scathing, very unscientific and yet on-the-mark bit:

But the FDA is betting big that scare tactics will work on some of the 47 million Americans who still smoke – and deter more teenagers from starting. Smoking prevalence has stalled at 20 percent of adults – and, ominously, about the same proportion of high school seniors.

Tobacco companies didn't have much to say about the new warning labels – although a spokesman for R.J. Reynolds notes that the company has already filed a suit challenging the constitionality of the warning label requirements, on First Amendment grounds.