Accessibility links
Curbs On Ads For New Drugs Could Be A Mixed Bag : Shots - Health News The value of a moratorium on consumer ads for new drugs would hinge on whether a reduction in unexpected side effects outweighed lost health benefits from reduced use of effective medicines, a Congressional Budget Office report says.

Curbs On Ads For New Drugs Could Be A Mixed Bag

Curbs On Ads For New Drugs Could Be A Mixed Bag 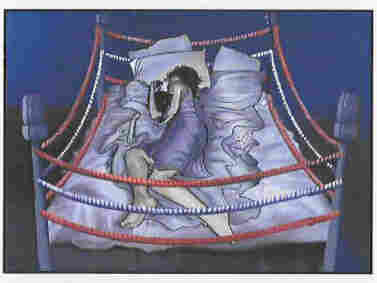 An image from the storyboard for a TV ad for the insomnia drug Lunesta, which the Food and Drug Administration said in 2010 made unsubstantiated claims. FDA hide caption

Some skeptics of the value of advertising prescription drugs directly to consumers have an idea: What if there were a moratorium on ads during the first two years on the market?

Maybe, the thinking goes, an ad timeout for new drugs would allow time for the full range of their side effect in the real world to become clear. And a curb on early ads could tamp down excess increases in drug spending, the advocates of the approach figure. Drugmakers spent $4.7 billion on DTC ads in 2008.

A few years back, some big drugmakers agreed to a voluntary six-month moratorium. And bills to limit ads have surfaced in Congress, though they didn't get much traction. Now, the Congressional Budget Office is out with a report on how longer bans, lasting two years or so, might play out. And, overall, the report concludes bans probably wouldn't do that much.

First, CBO figures drugmakers would probably step up their marketing to doctors to make up for some of the lost advertising to consumers. Think more ads in medical journals, a few more salesmen knocking on office doors and bigger banners at medical meetings.

Second, while the number of prescriptions for some new drugs might be lower than otherwise expected, the increases in other sorts of marketing would probably offset some or all of the drop due to a consumer ad ban.

Finally, CBO figures, in a classical economic analysis, any change in pricing for new medicines would be related to changes in demand. And given the CBO's analysis that the effects of a DTC ad ban on "demand are likely to be limited, so too are the effects on prices."

Plus, it's probably worth noting that drugmakers generally set prices for new drugs by calculating what they think the health value of those drugs is. And once they've put a figure on that, they're not too keen on lowering the price tags, even if demand is slow to materialize.

Now, CBO notes that one potential downside to consumer ad moratoriums is that they could depress the quick uptake of medicines that offer substantial benefits to patients. "Thus, the health effects of a moratorium would depend on whether the benefits of fewer unexpected adverse events were larger than the health costs of possibly reduced use of new and effective drugs," CBO Director Douglas Elmendorf concluded in a blog post about the report.