Accessibility links
U.S. Decides Against Endangered Status For Atlantic Bluefin Tuna : Shots - Health News Despite urging from environmental groups, the federal government has decided not to list Atlantic bluefin tuna as an endangered species. It's the huge, majestic fish that's sold around the world as high-end sushi. 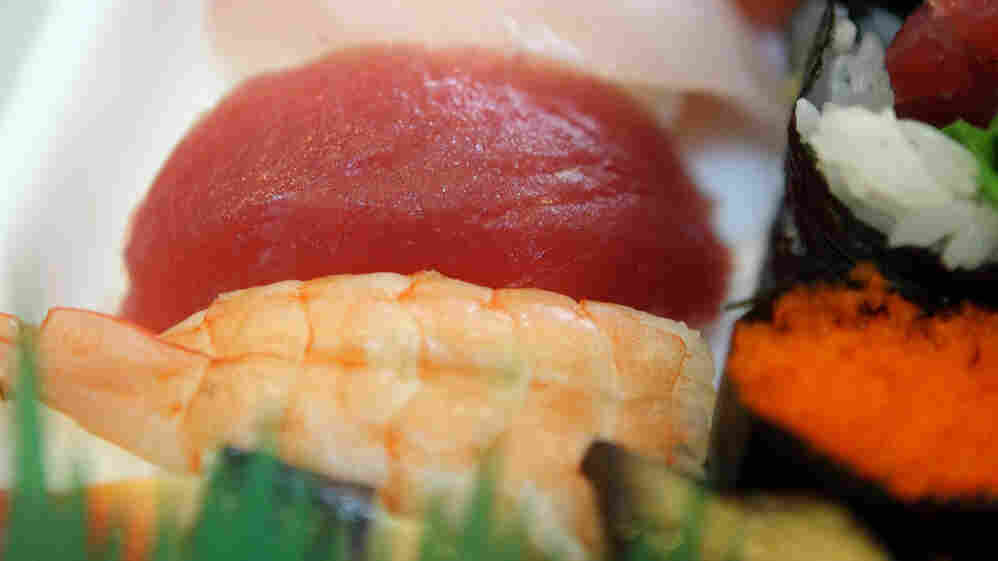 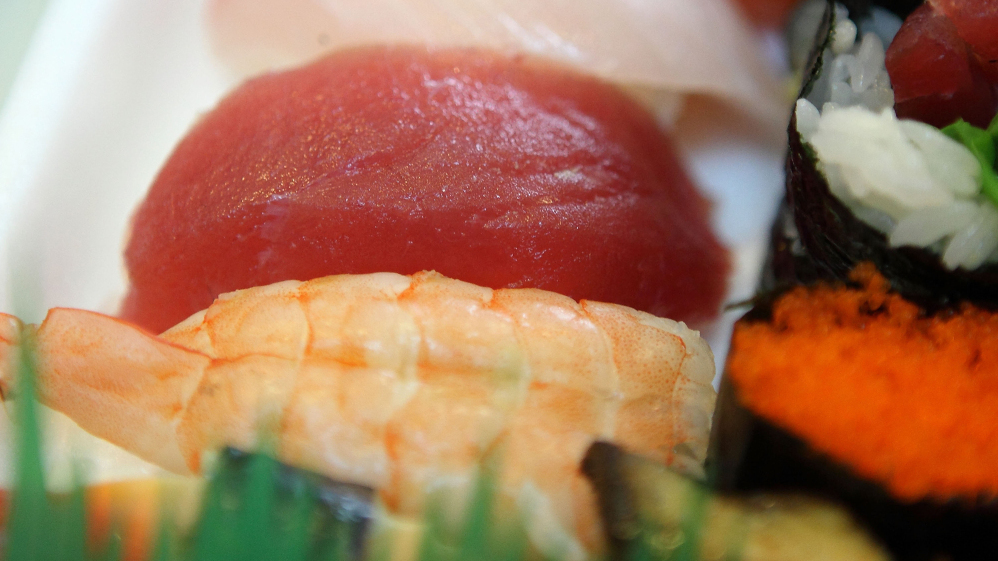 A chunk of bluefin tuna (center) at a sushi restaurant in San Francisco.

The federal government has decided not to list Atlantic bluefin tuna as an endangered species. No, this is not the chunky tuna you mix with mayonnaise for sandwiches. We're talking about huge, majestic fish that are caught, shipped off for top dollar to places like Tokyo's Tsukiji fish market, sliced up, and sold around the world as high-end sushi.

Last year, an environmental group called the Center for Biological Diversity petitioned the National Oceanic and Atmospheric Administration to declare this fish an endangered species because the population now is perhaps 20 percent of what it once was.

A single fish can sell for over $100,000, and fishermen have gone after them aggressively. Quotas have been set by an international body. But until recently, it simply ignored the advice of its own scientists, and allowed the fish to be caught at an unsustainable rate.

Adding insult to injury, the Altantic bluefin spawning grounds in the Gulf of Mexico were in the path of last year's BP oil spill. That raised concerns that many of the young fish — which emerge from eggs as tiny larvae — could have been killed by the oil. NOAA scientists say that in 2010 they measured only a modest decline in fish-larvae populations in the Gulf of Mexico. But some of that survey occurred before the spill, so they don't yet have a full picture of how the spill affected the tuna.

NOAA officials say that they have named the Atlantic bluefin tuna as a "species of concern," which means they will pay it extra attention. Officials hope tighter international fishing rules, established last November, will be enough to allow this species to recover. And NOAA said it would reconsider the request to list the species as threatened or endangered in 2013.

Listing the fish as endangered would have restricted fishing in U.S. waters, and by U.S. fishermen in international waters. But it would not address the aggressive fishing off the shores of Europe, and that has been driving most of the decline of this species.

The Harvard School of Public Health recommends eating oily fish rich in Omega-3 fatty acids like tuna twice a week, in part because it's good for the heart.

But the Center for Biological Diversity wants consumers to boycott bluefin to take pressure off the species, and has even gone after sushi restaurants in Las Vegas that serve the tender slivers of meat.

So what's an environmentally conscious sushi lover to do? Check the Monterey Bay Aquarium's Seafood Watch guide for sushi that tastes good and is OK to eat. As an alternative to bluefin, the aquarium recommends albacore tuna (shiro maguro), saying "it tastes similar and is a best choice when troll caught in the US or Canada."