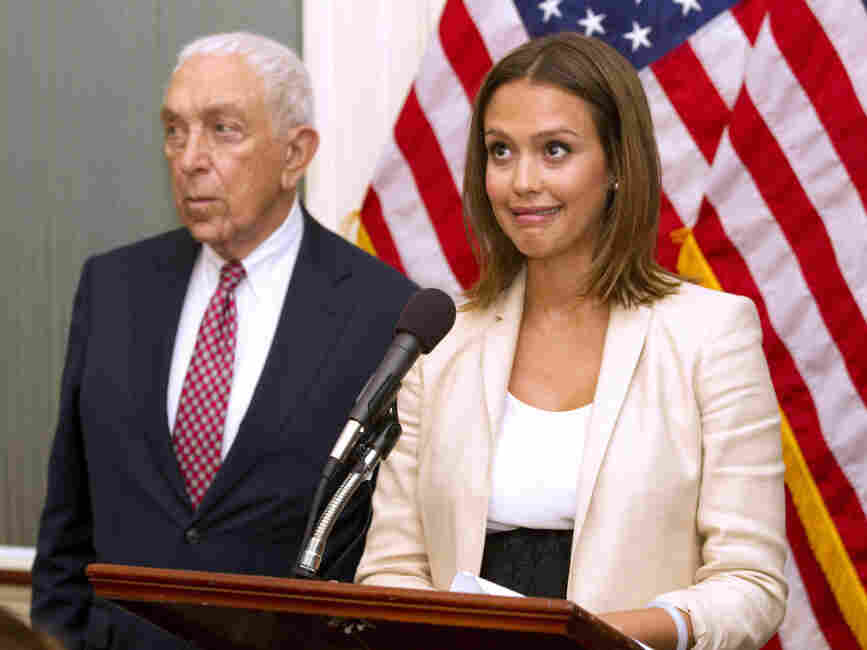 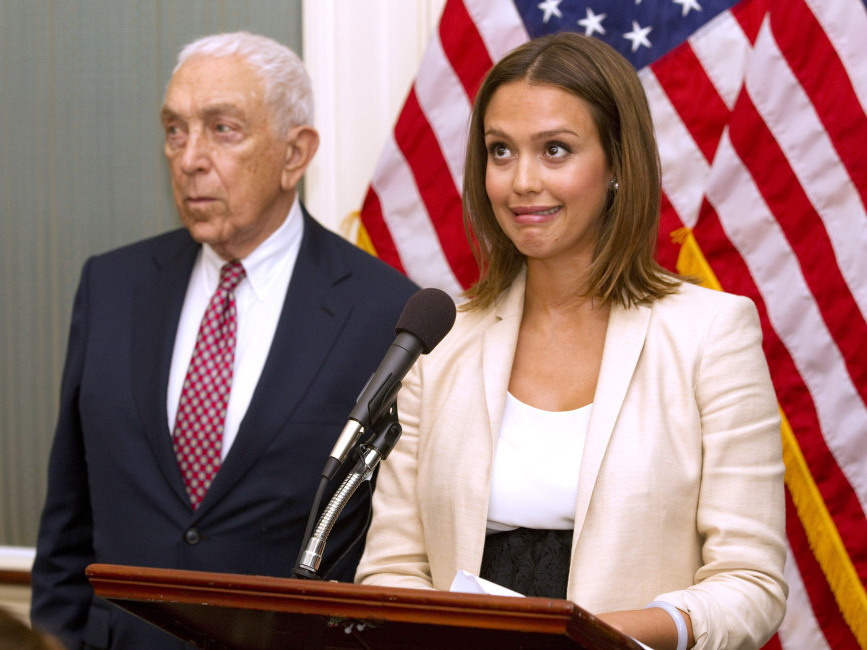 Actor Jessica Alba, accompanied by Sen. Frank Lautenberg (D-NJ), reacts when a buzzer calling for a vote goes off during a news conference on Capitol Hill Tuesday about chemical regulation.

I've only been in Washington a couple of years, but I've already seen that celebrities turned advocates for one cause or another are pretty much a dime a dozen.

Still, the chatter about Jessica Alba going on the stump for changes to a rather obscure federal law governing toxic chemicals was hard to ignore. Even the august Chemical & Engineering News, not exactly a celebrity gossip rag, weighed in yesterday with coverage of her media briefing alongside Sen. Frank Lautenberg (D-NJ), who introduced a beefed-up bill in April that would change the way the government deals with potentially dangerous chemicals.

Alba, a mom who's expecting her second child, is now the celebrity spokeswoman for Safer Chemicals, Healthy Families — a consortium of advocacy groups and companies ranging from the American Nurses Association to the Union of Concerned Scientists. They want more teeth in the federal law to tackle questions about chemicals like bisphenol A.

"Like many other moms out there, I try to buy safe products for my family, but that can't be the only solution. You can't hire a team of scientists to do your shopping for you," Alba said at the media briefing. "At some point the government has to step in and ensure that chemicals are safe before our children are exposed to them."

The American Chemical Council, a trade group, has supported changes to the Toxic Substances Control Act, but has differed with Lautenberg on some of the specifics. In a statement emailed to Shots, ACC's Scott Jensen wrote:

While children today in the U.S. can expect to live longer, healthier lives than at any other point in history, we agree that the Toxic Substances Control Act needs to be modernized to further ensure the safe use of chemicals and the innovation of new products. ACC believes we must work together to shape a chemical safety framework that fosters innovation and economic growth, while continuing to assure protection of public health and the environment.

Last month, the American Academy of Pediatrics asked the federal government to redo Toxic Substances Control Act. At the time, Dr. Jerome Paulson, a pediatrician at Children's National Medical Center in Washington, D.C., who was the lead author of the group's policy statement, told Shots:

I think there are many, many chemicals in many, many products on the market that are safe. But I say that as a leap of faith.

Regardless of your opinion on the merits of changes to federal regulation of chemicals, what's your view on celebrities entering the legislative fray?