Accessibility links
Pediatricians Warn Against Energy And Sports Drinks For Kids : Shots - Health News Caffeine is a no-no for children, so energy drinks should be off limits. Sugary sports beverages are also an issue. The doctors recommend that children drink water, and lots of it, instead. 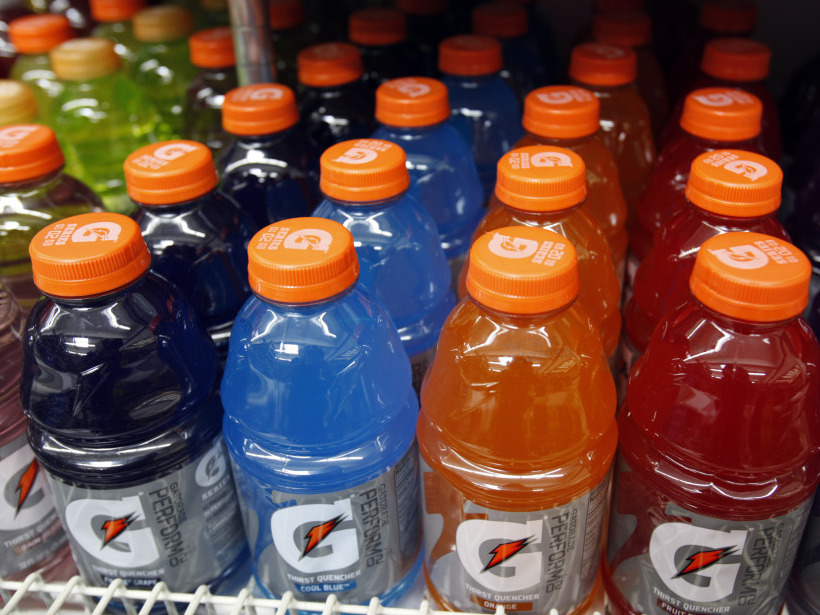 Gatorade on display at a grocery store in Palo Alto, Calif., last year.

Sports and energy drinks are hugely popular with kids. But the nation's pediatricians are not such big fans. They're now telling kids to lay off the energy drinks, and to use sports drinks only when they really need them — like when they're playing sports.

A new clinical report from the American Academy of Pediatrics warns that energy drinks, or any other drink with caffeine, should be off limits to children and teenagers. That includes colas and coffee drinks.

But the doctors are particularly worried about energy drinks, particularly since they often contain high levels of caffeine and other stimulants, and that's often not clear on the label. The pediatricians say energy drinks often get confused with sports drinks, which generally don't have caffeine.

Caffeine not only interferes with sleep, it can cause anxiety, raise heartbeats, and increase the risk of dehydration. "There's great concern about what [caffeine] does over time or in high doses to a young, growing body that's not fully mature," says Dr. Holly Benjamin. She is a pediatric sports medicine specialist at the University of Chicago, and coauthor of the new report, which was published in Pediatrics. "It's almost like a stress to your body."

Shots called up the Gatorade Company in Chicago to see what the folks there think about this attack on a drink as all-American as Michael Jordan and Dwight Howard, two NBA superstars who have been Gatorade pitchmen.

Gatorade referred Shots to Christine Rosenbloom, a registered dietitian and professor at Georgia State University, who has worked as a consultant for Gatorade in the past. "It felt a little bit like they were picking on just these two sources of sugar in a kid's diet," Rosenbloom told Shots. "As a dietitian, I always tell parents we have to look at all sources of sugar in a kid's diet, not just focus on one or two beverages."

And in fact Benjamin thinks that there's a place for Gatorade and other sports drinks in a healthy kid's diet — but only if they are getting a lot of exercise.

Athletes of all ages do need to replenish sugar, sodium, and potassium. The sodium replaces salt lost in perspiration, and the sugar helps keep energy levels up. But a person needs to have exercised intensely for an hour before they need that boost. Benjamin says: "That's for my high-level athlete, who's exercising like crazy, sweating intensely, for more than an hour at a time."

Less than that, though, and water — that humble substance not endorsed by multimillionaire NBA stars — does just fine.