Accessibility links
A Baby's Skin Is No Match For The Sun : Shots - Health News Almost all the studies on sun exposure and sunscreen have been done in adults, which makes it difficult for doctors to make recommendations grounded in evidence for youngsters. Still, it's clear that the sensitive skin of infants and toddlers needs protection.

A Baby's Skin Is No Match For The Sun

A Baby's Skin Is No Match For The Sun 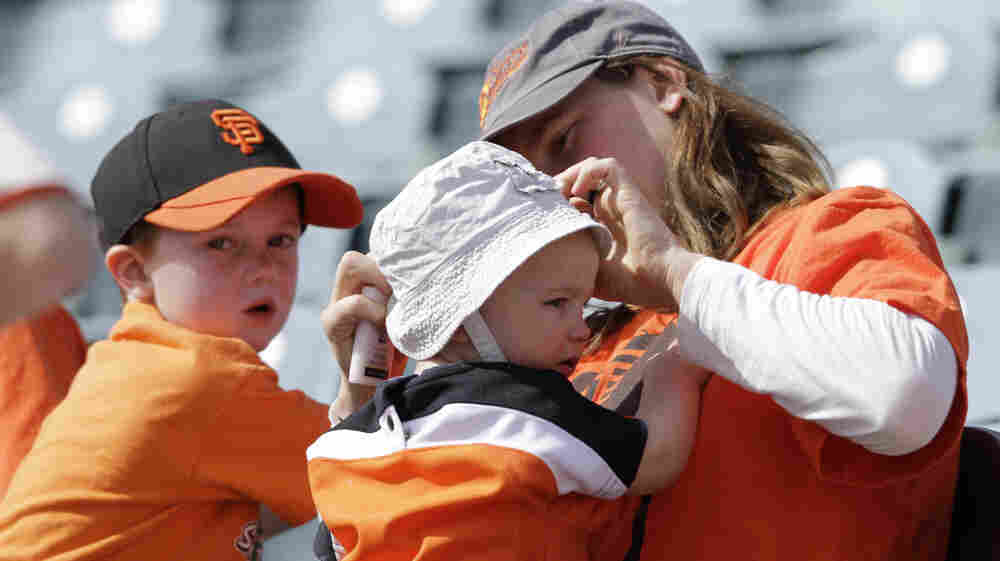 Erica Fortescue of San Francisco puts sunscreen and a hat on 11-month-old Nico Fortescue as her brother Theo, 4, looks on during a March spring training baseball game in Phoenix. Eric Risberg/AP hide caption 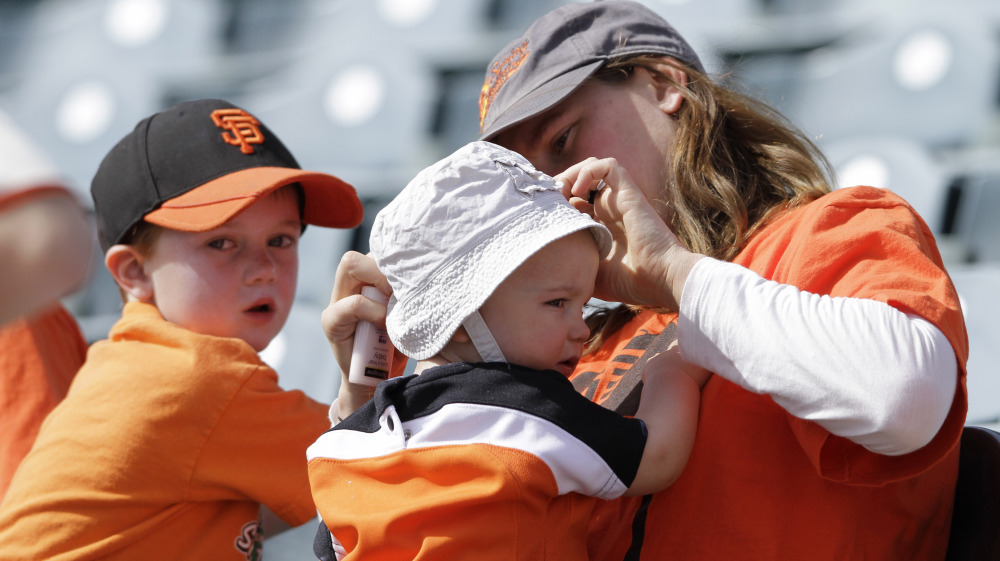 Erica Fortescue of San Francisco puts sunscreen and a hat on 11-month-old Nico Fortescue as her brother Theo, 4, looks on during a March spring training baseball game in Phoenix.

A baby's skin has got to be the most velvety soft substance on earth. That delicate skin makes babies and toddlers more vulnerable to sun damage, and to the chemicals in sunscreens intended to protect them.

But parents looking for advice on how best to shield very young children from the sun can have a hard time coming up with solid recommendations. There's a good reason for that; almost all studies on sun exposure and sunscreen are done in adults. And baby skin is very different from grown-up skin, according to a roundup of the latest info in the journal Pediatrics.

For one thing, the outer later of baby skin is a lot thinner, and it absorbs more water than adult skin. Infant and toddler skin also has less of the brown pigment melanin, which helps protect the skin from ultraviolet light. As children become older, their skin becomes thicker and more pigmented, granting them more sun protection.

"What we have to realize is how little we really know about babies' skin, in terms of its responses to UV exposure, and also what's out there and on the market for sun protection," Dr. Amy Paller, chairman and professor of dermatology and professor of pediatrics at Northwestern University's Feinberg School of Medicine, tells Shots. She's the lead author on the report. "But we are starting to learn a lot more about babies' skin."

Paller says the fact that new research shows that 1-year-olds have darker skin on the outside of their forearms, compared with the inside, shows that even babies get more sun exposure than we realize. "We need to be using sun protection from very early on."

Doctors think that sun exposure early in life increases the risk of skin cancers, and less protective skin of babies may be part of the reason. The ultraviolet light in sunlight also suppresses the skin's immune system, which may be why lots of early-life sun exposure is associated with earlier melanoma skin cancers. A few studies found that the genetic changes in the skin caused by sun exposure are different in young children from those in adults.

So those are all good reasons to protect that precious baby skin, and the skin of older children, too. But it's not easy to come up with an effective, safe, nonirritating sunscreen for small children. That's reflected in the stat that 7 to 13 percent of children get sunburned in a single summer weekend, and 29 to 83 percent of kids get sunburned at least once in a summer. Ouch! That includes teens misusing tanning beds, but still.

That thin baby skin, and the fact that babies are far more prone to rashes than adults to begin with, "reinforces the need for sunscreens with minimal irritation or sensitization potential," the Pediatrics report says. Newer oil-based formulas that incorporate titanium dioxide or zinc oxide are promising, the authors say, but they haven't been tested in babies.

So parents are stuck with the current advice from the American Academy of Dermatology: Keep babies out of the sun for six months. After that, avoid midday sun, have children wear protective clothing and hats; seek shade; use sunglasses that block UVA and UVB; and use sunscreen.

Paller concedes that once children are mobile (and know how to tear off a sun hat), it's harder to keep them covered up. But she says parents have to try. "Try to avoid that midday sun, which is most intense," she says. "Use sun protective clothing, and use sunscreens. It's none too early to be using sun protection in the first year of life."

Caveats: Two of the authors of the study work for Johnson & Johnson, which manufactures sunscreen, and all of the rest were paid to participate in a roundtable on infant sun protection. They weren't paid to write the article, though, and it's hardly a rave review for current sunscreen technology.