Accessibility links
Nearly 1 In 7 People On Earth Is Disabled, Survey Finds : Shots - Health News Worldwide, the most common disability for people under age 60 is depression, followed by hearing and visual problems, according to a new international survey. The study found more than 1 billion people live with some sort of disability.

Nearly 1 In 7 People On Earth Is Disabled, Survey Finds

Nearly 1 In 7 People On Earth Is Disabled, Survey Finds 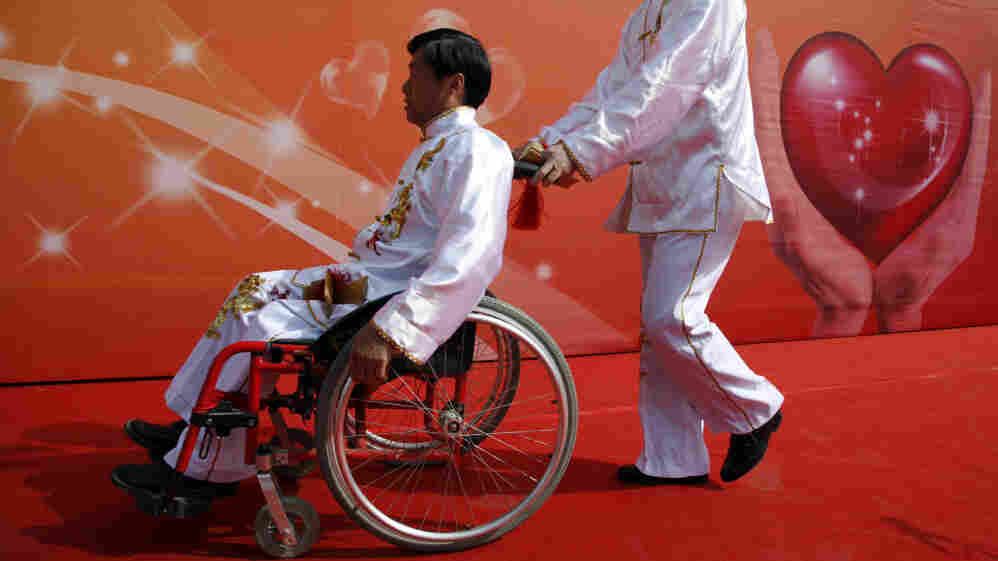 A man pushes a friend in a wheelchair following an event in Beijing to raise awareness of accessibility issues for the disabled. Ng Han Guan/ AP Photo hide caption

More than 1 billion people in the world are living with some sort of disability, according to a new international survey. That's about 15 percent of the world's population, or nearly one of every 7 people.

The numbers come from a joint effort by the World Health Organization and the World Bank. The last time anyone tried to figure out the prevalence of disabilities was back in the 1970s, when WHO figured it was about 10 percent. The current report suggests the 15 percent estimate will grow as the world's population ages.

Like the 1970s numbers, today's figures are at best an approximation. Many countries don't collect numbers carefully, and definitions of disability differ from place to place. The World Bank/WHO folks sought out tabulations of people who have trouble seeing, hearing, walking, remembering, taking care of themselves or communicating. Worldwide, the most common disability in people under the age of 60 is depression, followed by hearing and visual problems.

The report includes a foreword by theoretical physicist Stephen Hawking, who can't feed himself or get dressed or speak without assistance because of his amyotrophic lateral sclerosis, a debilitating and usually fatal disease. He says there's a moral duty to help disabled people.

The head of WHO, Margaret Chan, offers up another reason: "Almost every one of us will be permanently or temporarily disabled at some point in life." An editorial in the medical journal The Lancet points out that accommodations for people with disabilities, such as curb cuts, help the non-disabled as well (such as people with strollers).

Why even come up with a number? Knowing the prevalence of disabilities helps organizations set priorities and figure out what it will cost them to set up the kind of programs called for by WHO and the World Bank — programs that make it possible for people with disabilities to take care of themselves, to work and get around.

The report didn't estimate the total cost of establishing such programs. And it offered no solutions for perhaps the biggest challenge: finding the money.