Accessibility links
Administration Prescribes Prevention For Nation's Health : Shots - Health News Some 17 federal agencies are expected to be involved in executing a national prevention strategy. The plan would draw on a wide range of health workers, institutions, community-based organizations and government agencies for help.

Obama administration officials unveiled a plan to improve our nation's prosperity. No, not with more jobs, but by helping Americans stay healthy at every stage of life. 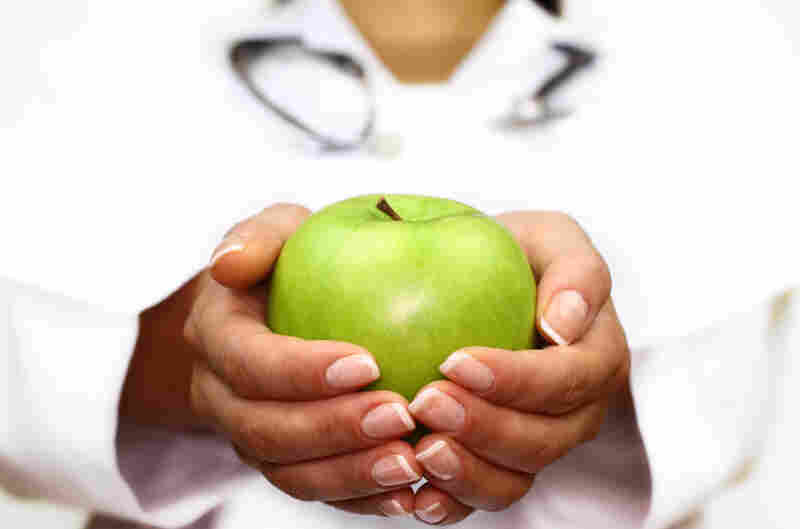 But first, they got a workout congratulating each other on a job well done with the National Prevention Strategy, a plan required by the federal law overhauling health care, during a Thursday media briefing.

Some of the key players behind the plan, including Department of Health and Human Services Secretary Kathleen Sebelius, Surgeon General Regina Benjamin and Senator Tom Harkin, were on hand to outline a broad, and sometimes cryptic, blueprint for improving the nation's health.

Sebelius said the plan "will help us transform our health care system away from a focus on sickness and disease to a focus on prevention and wellness." That shift, she said, would help "people live long and productive lives and can help combat rising health care costs."

Some 17 federal agencies are expected to be involved in executing the plan, which was developed by the National Prevention Council. The plan would draw on a wide range of health workers, institutions, community-based organizations and government agencies for help.

The strategy aims to reduce leading causes of death and illness, such as smoking, bad eating habits and drug abuse.

"For every dollar we invest in prevention, we save $6," said Sen. Tom Harkin (D-IA), a major supporter of the strategy, who was also in attendance. We need to provide an approach that makes it easier to be healthy and harder to be unhealthy."

Programs such as the newly unveiled nutritional guidance called MyPlate are a start. It's "a simple tool on how to eat," said Surgeon General Benjamin. "Empowering people to make healthy choices."

She also noted the big challenge will be changing the way people think about health in this country. Rather than trying to cure a disease, the focus will be on how to prevent it. "It's too important for us to not make these investments," she said.

Under the plan, there will be a yearly status report that tracks and measures progress.