Accessibility links
FDA Finds Silicone Breast Implants Safe, But Prone To Fail With Age : Shots - Health News In research on women who had breast augmentation before 2006, 20 to 40 percent of those who got silicone implants for cosmetic reasons had subsequent surgery to deal with problems. The proportion was even higher for women who got implants after treatment for breast cancer. 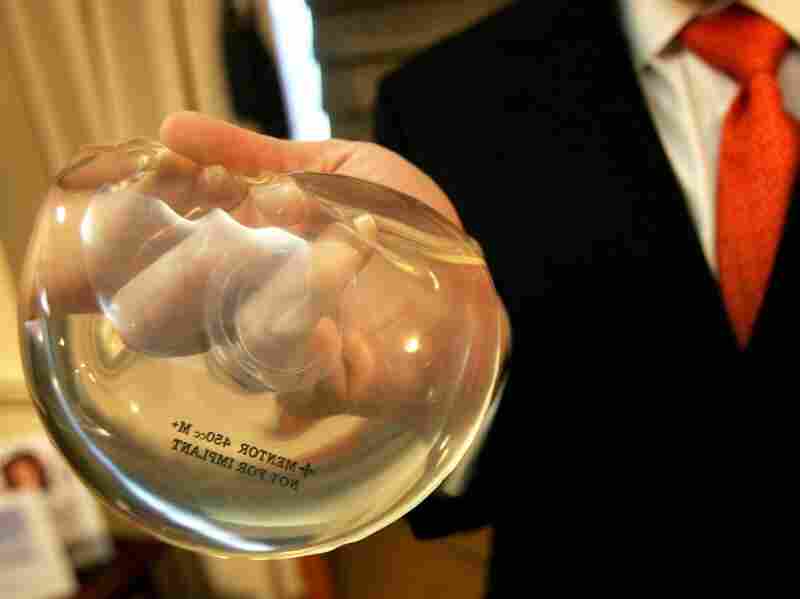 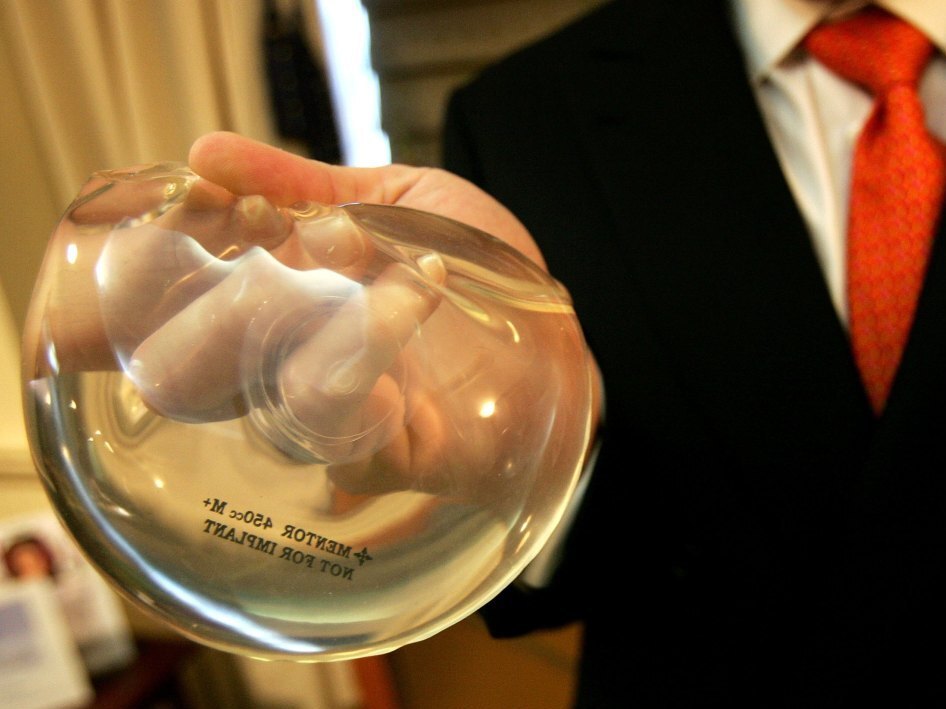 New York plastic surgeon Brad Jacobs holds a silicone gel breast implant in 2006. That year the FDA allowed silicone implants back on the market, after a 14- year hiatus.

Today the Food and Drug Administration said that silicone breast implants are generally safe, when used as intended. And the devices don't seem to cause autoimmune disease, breast cancer, or reproductive problems, as some previous reports had suggested.

But the agency also said that women frequently have problems with the implants, so much so that they often have to have surgery to remove or replace them.

"Breast implants are not lifetime devices," Dr. Jeffrey Shuren, head of FDA's device division, said at a press conference. "The longer a woman has silicone-filled breast implants, the more likely she is to experience complications."

Those complications include hardening of the breast, scarring, and rupture of the implant, which requires surgery to remove or replace it.

Silicone breast implants have been used since the 1960s, but were taken off the market in the United States in 1992 because of concern that gel leaking from the implants could cause cancer or autoimmune disease.

In 2006, the FDA let two companies sell the devices again, Allergan and Mentor, a unit of Johnson & Johnson. One condition: The companies were required to do studies following 40,000 women for 10 years. A five-year review of those data showed no big new safety issues, FDA officials said today.

But critics said that study data aren't very useful, because the researchers have lost touch with more than half of the women originally enrolled. That's true for earlier studies, too. "In some of the studies they have a 5 percent response rate," Diana Zuckerman, president of the National Research Center for Women and Families, a private nonprofit that monitors breast implant safety, told Shots. "It could be that they're perfectly happy with their implants, but you can't assume that."

Women who get implants for cosmetic reasons are least likely to participate in safety studies, yet they account for the majority of breast implants. In 2010, 297,000 women in the United States got implants in order to increase their breast size, while 90,000 women got implants for reconstruction, mainly after mastectomy for breast cancer.

In January, the FDA reported a possible association between breast implants of all types and a rare type of cancer called anaplastic large cell lymphoma. This autoimmune cancer grows next to the implant. There have been 34 such cases reported worldwide, a very small fraction of the 5 to 10 million women around the world with implants.

Silicone implants can leak, and it's usually impossible for women to feel that rupture. So the FDA says all women getting silicone implants should have an MRI after three years to check for silent rupture, and every two years after that. Those scans can be expensive and may not be covered by health insurance, though.