Accessibility links
A Touchy Situation For Sunscreen At Camp : Shots - Health News A flip-flop on rules on sunscreen for campers in Maryland shows it's not so easy to protect kids from sun exposure and the risk of inappropriate touching.

A Touchy Situation For Sunscreen At Camp

A Touchy Situation For Sunscreen At Camp 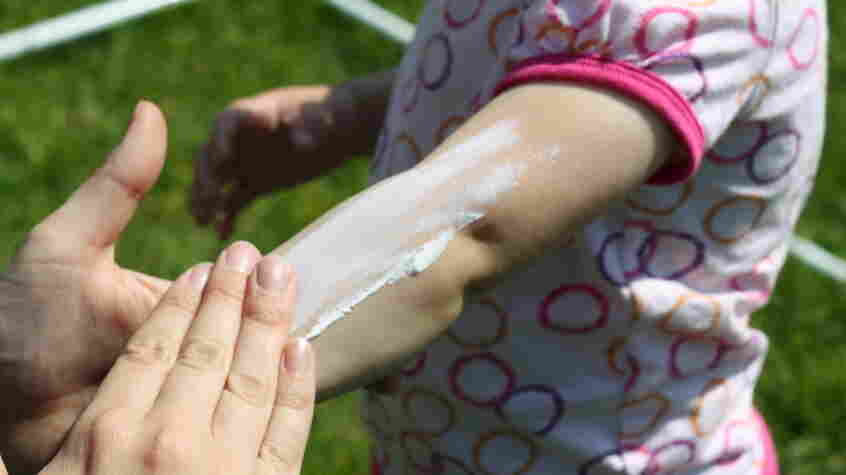 Have you got permission to do that? iStockphoto.com hide caption

Even under the best of circumstances, it's tough to get squirmy kids to cooperate when it comes to sun protection.

But just in time for summer, the state of Maryland dropped some rules on camps that put more hurdles in the way of getting sunblock on kids' skin.

Parents would have to give the camp written permission (just like the kind for a prescription medicine) for their kids to use sunscreen and also provide the stuff, preferably a type that would be easy for children to put on themselves.

Camp staffers were discouraged from helping kids apply UV-blocking goop and to touch them as little as possible when doing so.

What about the buddy system? Forget it. The rules said in bold print:

Just three months ago, the state health department emphasized the importance of protecting kids from the sun. "Stocking up on sunscreen and then using it regularly is a good start," Frances Phillips, the state health department's deputy secretary for public health said in a May statement. "It is extremely important to protect children from the sun with clothing or sunscreen."

I've got a few campers in my Maryland household and was puzzled by the authorization form that landed in my email inbox last week. Then the Washington Post got on top of the story, like zinc oxide on a 5-year-old's freckled nose. A local dermatologist told the paper the rules were "absurd," given the skin cancer risk posed to children by the sun.

Over the weekend, Maryland relented and issued a new policy that came pretty close to a never mind. Camps still need to get an authorization from parents for sunscreen. But sunscreens aren't treated like prescription drugs by Maryland anymore. Camps aren't barred from providing sunscreen, if parents approve. And camp workers can help kids put the stuff on, again, if parents agree.

How does your kid's school or camp handle sunscreen?