Accessibility links
To Save A Fish, Eat Asian Carp Or Lionfish : Shots - Health News Environmental groups want consumers to start eating invasive fish species, such as lionfish and Asian carp. But Whole Foods, for one, has no plans to sell them anytime soon because there isn't much demand. 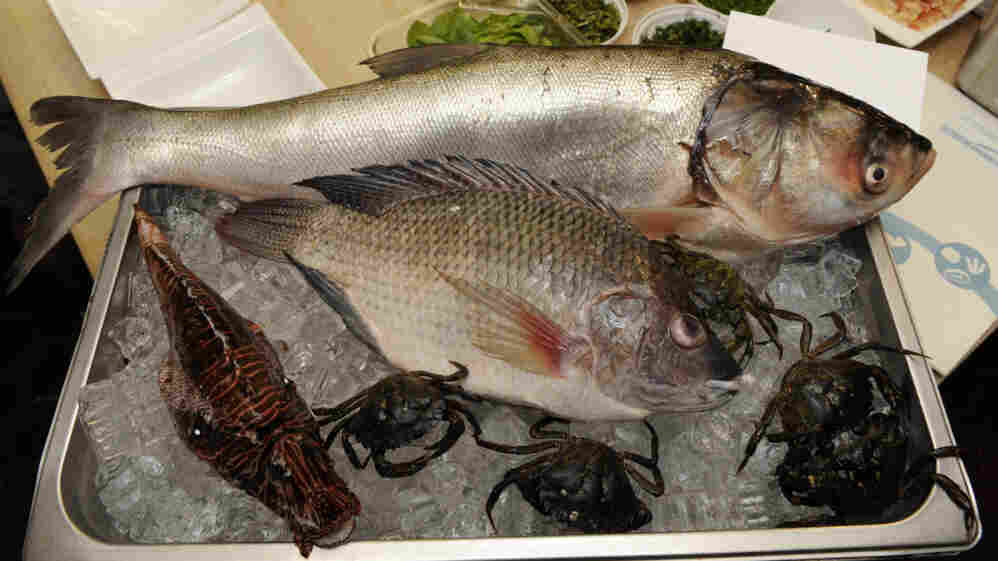 From doctors to the government, everyone seems to be telling us to eat more seafood because it's nutritious and can be good for our hearts.

But environmental groups have made choosing fish a bit more complicated by reminding us that many species are overfished, contaminated or farmed under sketchy conditions.

Now there's a new variable, but one that may simplify the proposition. Is the fish on the menu an invasive species?

Yesterday, the advocacy group Food & Water Watch released its 2011 Smart Seafood Guide. And high on the list of seafood that's OK to eat are such invasive species as lionfish, Asian carp, blue tilapia, and a few kinds of crab.

Some of these may not be well-known to gourmands, but all of them are pushing out the locals in various rivers, lakes and coastal areas around the country.

The environmental group wants to show they can be as tasty as they are pesky. So it enlisted hotshot chef Kerry Heffernan of South Gate Restaurant to cook up some lionfish and Asian carp yesterday at the James Beard House, a foodie hangout in New York.

Lionfish might be the best-known (and perhaps notorious) of the bunch. Late last year, we noted the release of the Reef Environmental Education Foundation's Lionfish Cookbook, featuring 45 recipes with the spiny tropical fish. Although its spines are venomous, they're not hard to remove and the poison in them is neutralized with cooking heat, says FWW.

Another disreputable fish on FWW's menu is the Asian carp. Since its arrival in the U.S. in the 1970s, it has been spreading from the Southeast up the Mississippi and other Midwestern rivers, slurping up plankton, reproducing like crazy, and edging out smaller fish along the way. The big fear is that it will eventually take over the Great Lakes, where it could do some major ecological damage.

A few fish companies have cropped up along the Mississsippi to export Asian carp back to China, where it's well-loved in many dishes, as NPR reported on Morning Edition last year. But FWW's executive director Wenonah Hauter says Americans don't yet have an appetite for it, and should.

Even if you're keen to try Asian carp and the other invasives in FWW's guide, though, it may not be so easy to get your hands on them. Take Whole Foods, the national chain and sustainable seafood mainstay for many shoppers. The company has no intention of selling Asian carp or lionfish anytime soon. "We simply haven't even investigated, as there has been no urging from customers to do so," spokeswoman Ashley Hawkins tells Shots.

Hawkins added that before the company would even consider stocking invasive species, it would need to research "commercial availability, presentation, taste and customer acceptance."

Hauter says that this is exactly why FWW is focusing on the naughty fish this year. She adds that there's another incentive to beg retailers for these fish: They probably have few contaminants like mercury and PCBs that have been found in big fish like tuna and swordfish.

The Food and Drug Administration inspects less than 2 percent of imported seafood, which means it's a bit of crap shoot if you're buying fish from overseas, especially ones that could be farmed in dirty water. The FDA hasn't tested Asian carp for contaminants yet, but they're not bottom feeders so they probably don't accumulate many toxins. Invasive wild tilapia, too, may be better than some farmed species.

"We know that a lot of tilapia in Asia are farmed with chemicals, so consumers might prefer to eat wild-caught blue tilapia that have established themselves in Florida's [coastal waters]," says Hauter.

In the meantime, however, the only way to get this fish and the others might just be to catch them yourself.