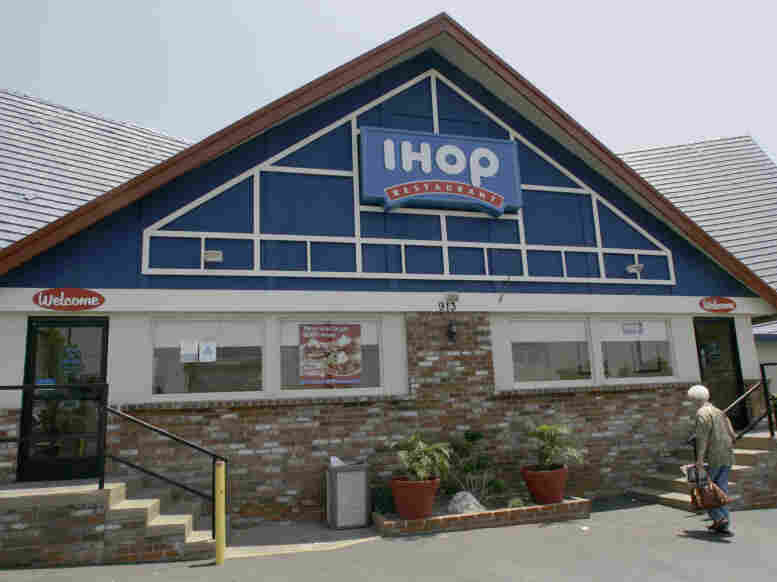 More healthful options for kids are coming to IHOP restaurants and some other chains. Nick Ut/AP hide caption

In a nod to the growing demand for nutritious options for families eating out, restaurants across the country will make it easier for parents to swap fries for apple slices in their kids' meals.

The National Restaurant Association said it's encouraging restaurants to offer choices that emphasize nutrition over empty calories in meals for children through a new program called Kids Live Well.

But a big question remains: Will kids really choose steamed broccoli and grilled chicken instead of fries and burgers?

Participating restaurants have agreed to put at least one kids' meal on the menu that includes two or more servings of fruits and vegetables, lean protein, low-fat dairy and whole grains. And, the offering has to have 600 calories or fewer, and less than 35 percent fat and sugar.

"We have an important role to play in helping Americans lead healthier lives," said Dawn Sweeney, NRA president and CEO, at the National Press Club in Washington at today's launch.

Some of the offerings? A grilled salsa chicken taco at Chevy's, pasta marinara at the Corner Bakery Cafe, and chicken and dumplings at Cracker Barrel. And lots and lots of grilled chicken and steamed broccoli.

The Silver Diner, an East Coast chain that is associated more with cheeseburgers than grilled salmon dinners, is also participating in the new program. "I think we all have in the United States the moral obligation to give our kids better and healthier food," said founder and executive chef Ype Von Hengst, as he marched tiny kids in chef hats carrying bison burgers up to the podium.

"I feel strongly that kids are not born with chicken tenders in one hand and macaroni and cheese in the other," he says. "If that's all we're going to give them in the restaurants, that's all their going to eat."

Even the Center for Science in the Public Interest, typically skeptical of industry-based nutrition initiatives, acknowledges it's a good start. "The program is a modest first step," CSPI's Margo Wootan tells Shots. "It's really not enough to have one choice among a minefield of high-calorie, salty, high-fat options on childrens menus... Kids meals have become really synonymous with junk food."

But they'll have to dress up that plain Jane grilled chicken in order to get kids to order it. "It's hard for steamed broccoli to go head to head with french fries," she says. "They need to make the vegetable much more interesting and give kids variety."