Accessibility links
Free Birth Control Could Become Mandatory : Shots - Health News Is birth control part of preventive care for women? That's the question before an independent panel of experts. And their decision could force insurance companies to fully cover the cost of the pill and other prescription contraceptives. 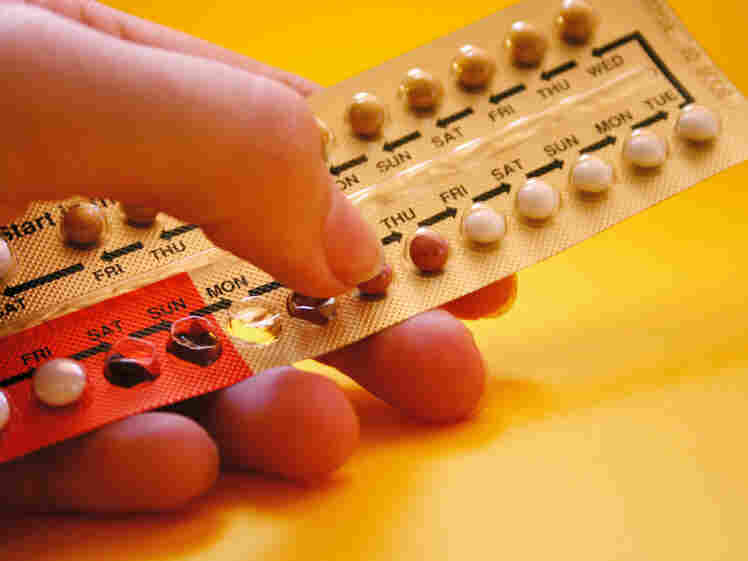 Update 2:00 p.m. ET: The Institute of Medicine report is out earlier than expected, after an embargo was broken. Among other things, it recommends that the federal government consider putting "the full range of Food and Drug Administration-approved contraceptive methods" on the list of services for women that would be covered by insurers without a copay.

Is there nothing in last year's Affordable Care Act that people won't fight over?

The latest battle is set to come to a head Wednesday, when the independent Institute of Medicine is expected to make recommendations about preventive health care services for women. And one service that's drawing a lot of the attentions is contraception.

Depending on the group's recommendation, contraception could become part of a package of preventive benefits that every health plan would have to cover without patient cost-sharing. In other words, it would become effectively free.

That would have made a big difference for Andrea Leyva, of Tucson, Ariz. A few years ago, following the cancer death of one of her three children, she and her husband — both employed and with health insurance — were nonetheless struggling to pay the bills for them and their remaining two children.

The $25 copay for her monthly birth control prescription "began to fall into the category of a luxury for us," she said, and they stopped filling the prescriptions regularly. At age 36, Leyva found herself pregnant with what she calls her "blessed surprise," daughter Alexandria. "So while we're happy that she's here, it was not planned, and had we had some better finances, we probably could have made some better decisions," Leyva says now.

Deborah Nucatola, senior director for medical services for Planned Parenthood Federation of America, says Leyva's story isn't unique. "Half of all pregnancies that happen in the U.S. every year are unintended," she says. "And if we could prevent an epidemic of this proportion, that should be justification enough that contraception is preventive care."

But at the same time, says Nucatola, who's also an OB-GYN, birth control is about more than just preventing pregnancy. "We can also use it as essential preventive medicine for the 4 million women who have babies every year in the U.S.," she says. "Babies born at least 18 months apart are going to be healthier than those born closer together, and closely timed births are risky for their mothers, too."

Earlier this year, NPR and Thomson Reuters polled people for their views on whether private insurance plans should cover contraceptives. About three-quarters of Americans believe private insurance, including employer-based policies, should cover all or some of the cost of oral contraceptives. Support was just about the same when people were asked if government assistance was used to make the purchase of insurance more affordable.

But not everyone agrees that contraception should be available to the same extent as mammograms or childhood immunizations.

"There are two reasons we oppose the inclusion of contraceptives as a preventive service," says Jeanne Monahan. She's director of the Center for Human Dignity at the conservative Family Research Council.

One big problem, she says, is that requiring insurers to cover contraceptives violates the conscience rights of people who belong to religions that don't believe in artificial contraception. "Say for example that I had a problem with it; I would be paying into a plan that would be covering them," she says. "So in a way I would be forced to pay for it myself."

The other problem, says Monahan, is abortion. Specifically, abortion opponents argue that some emergency contraceptives — so called morning-after pills — can cause very early abortions by preventing the implantation of fertilized eggs into a woman's uterus.

"So those 7 to 10 days before a baby can implant, Plan B can prevent implantation and thereby cause the demise of that baby. So we'd be opposed to those drugs being included because they act as abortifacients."

Plan B is one of two emergency contraceptives that have been approved by the FDA. They are different from the abortion pill mifepristone. Neither can disrupt a pregnancy that has already begun. But Planned Parenthood's Deborah Nucatola says the argument about preventing implantation has been exaggerated by abortion opponents. "If people want to postulate on the theoretical risk of prevention of implantation, they're entitled to do that, but there is no scientific evidence that that is a mechanism of action," she says.

Still, it was the divisive politics of birth control that prompted the Department of Health and Human Services to punt the matter to the Institute of Medicine in the first place. On Wednesday, the IoM officially tosses the decision about whether insurers should cover contraception back into the government's lap.