Accessibility links
Cancer Patient Gets First Totally Artificial Windpipe : Shots - Health News A 36-year-old geology student received a synthetic windpipe created in a laboratory from plastic and his own bone marrow cells. The transplant was needed to replace his natural windpipe, which was being blocked by a fast-growing tumor. 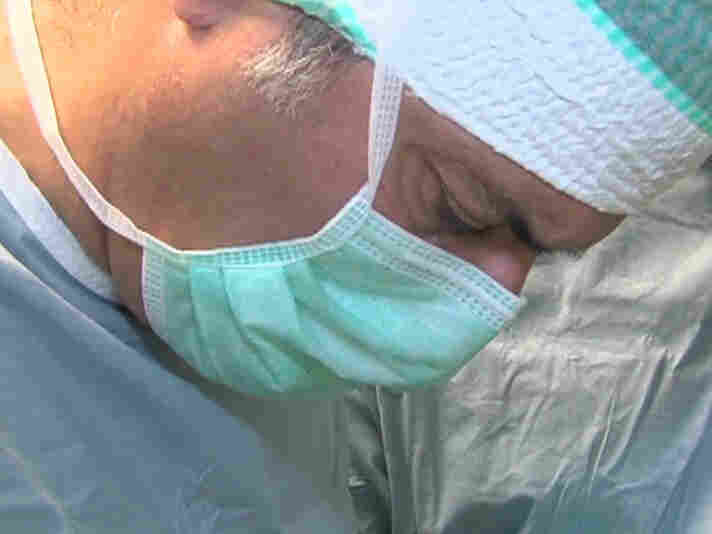 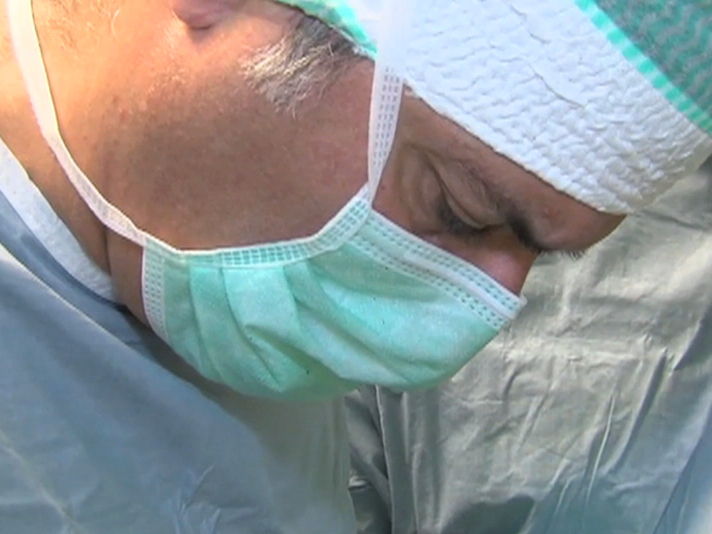 In a milestone for the fast-evolving field of tissue engineering, a 36-year-old geology student from Africa is breathing through a synthetic windpipe created in a laboratory from plastic and his own bone marrow cells.

Andemariam Teklesenbet Beyene was discharged today from the Karolinska Institute in Stockholm, one day short of a month since he had his cancerous windpipe replaced with the custom-made spare part.

"It's working like a normal windpipe," surgeon Paolo Macchiarini told Shots. "He's able to cough. He's able to expel his secretions. He's breathing normally. He has the sensation he's breathing."

Before the surgery, Andemariam, as he prefers to be known, was having increasing difficulty getting enough air because a rare and aggressive tumor was encroaching on his windpipe and spreading down into his right bronchus, one of the twin tubes that connect the trachea to each lung.

Beyene had failed conventional treatment with surgery, chemotherapy and radiation. He had no other options and limited time to live, Macchiarini says.

In an odd twist that undoubtedly has saved his life, Andemariam, an Eritrean father of two, was studying geology in Iceland when his cancer struck. Dr. Tomas Gudbjardsson, an Icelandic surgeon, had heard about Macchiarini's pioneering work in transplanting tracheas from brain-dead donors over the past three years.

Gudbjardsson referred him to Macchiarini, a globe-trotting surgeon now based in Stockholm. The Icelandic doctor assisted in the 12-hour operation that replaced Beyene's trachea on June 9. 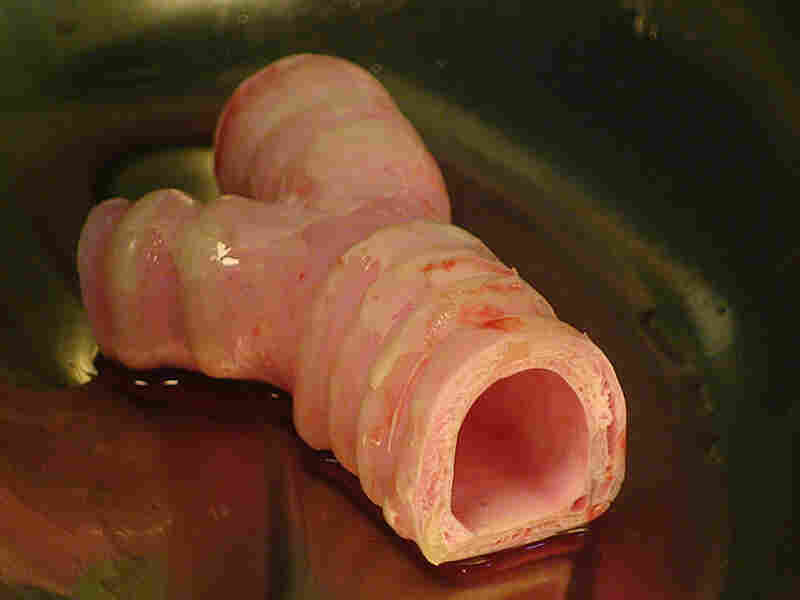 In a first, this artificial windpipe was implanted in an Eritrean man stricken with cancer. David Green/Harvard Bioscience hide caption 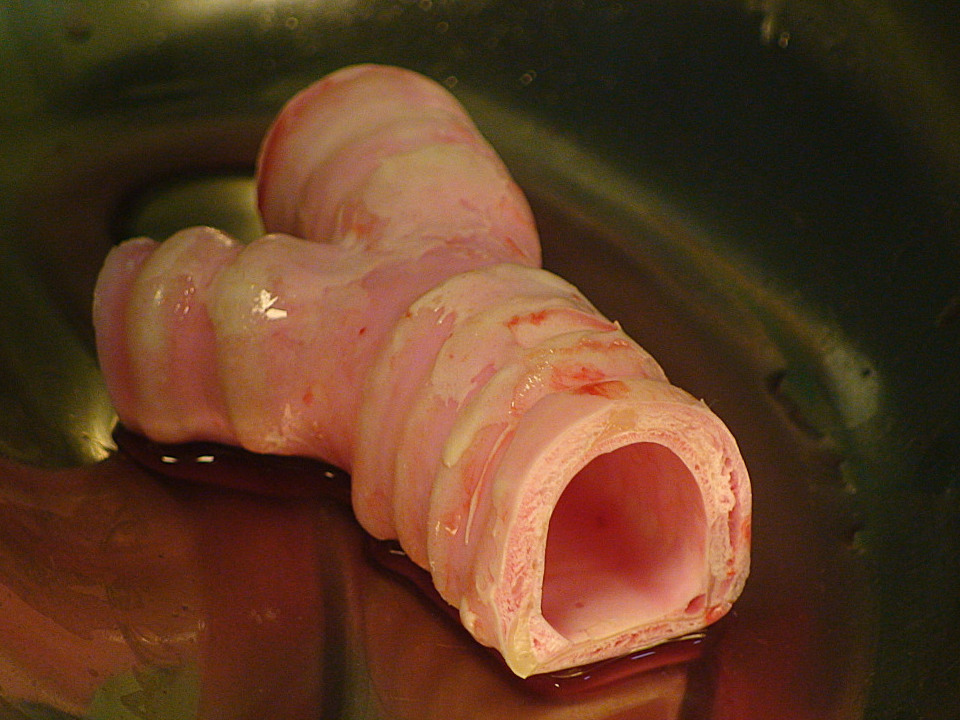 In a first, this artificial windpipe was implanted in an Eritrean man stricken with cancer.

Macchiarini made headlines in 2008 when he replaced the windpipe of Claudia Castillo, a Spanish woman, with a trachea taken from a cadaver donor. In that case and about nine operations since then, Macchiarini chemically stripped all the donors' cells from the windpipes, leaving the cartilage skeleton.

Then the surgeon harvested bone marrow from the recipient, which contains stem cells that can differentiate into many tissue types. Dripping those stem cells onto the cartilage scaffold from the donor, and adding his own recipe of growth factors, Macchiarini has been able to give patients lasting tracheas that aren't rejected by their immune systems.

These operations paved the way for Andemariam's implant. The big difference in his case is that no donor trachea was involved — a big plus, because many patients with fast-growing tumors like his (and other conditions, such as trauma) can't wait for a donor to be found.

Time was a big factor in Andemariam's implant, which required a custom-made polymer scaffold fabricated to replicate his own anatomy from a spongy polymer invented by Alexander Seifalian at University College London. Seifalian had only about three days to make the scaffold.

Meanwhile, a team at Harvard Bioscience, a biotech company near Boston, pulled all-nighters making a "bioreactor" that could contain the scaffold and incubate it with Andemariam's stem cells.

"The bioreactor serves to oxygenate the cells," the company's president, David Green, told Shots. "It rotates the scaffold much the same way a chicken is rotated on a rotisserie. That allows the cells to be deposited evenly over the spongy scaffold."

Once the scaffold and the bioreactor got to Stockholm and a solution containing Andemariam's stem cells was added, it took two days for enough cells to grow. At this point that's an intuitive judgment because there's no definitive test to signal that it's ready, Green says. "It's not like baking a cake, where you put a thermometer in the middle to know if it's done."

Once the implant was sutured into Andemariam's chest, the big question was whether it would leak air. "The only way to be 100 percent certain was to stitch his chest back up and see if he breathed," Green said, "and he did," with the aid of a ventilator.

The next challenge was to avoid infection. "The windpipe is in contact continuously with the air, the external environment," Macchiarini says. "So it can become infected."

The stem cells, bathed with three different growth factors and protective chemicals at the time of surgery, grew into a thin sheet of cells on the inside of the scaffold "surprisingly quickly," Green says.

But the most important achievement, Macchiarini says, is that blood vessels quickly began to grow into the graft. To give it a blood supply before that, the surgeon detached a piece of omentum, a blood-rich tissue that lines the abdomen, and snaked it up to Andemariam's chest through a hole in his diaphragm, then sutured it to the outside of the graft.

Macchiarini plans several more synthetic trachea implants, two of them involving U.S. patients. One is a 9-month-old infant, adopted from Korea, who was born without a windpipe and breathes through a hole in her esophagus.

In that case, the surgeon will use a biodegradable polymer scaffold that will dissolve over time as it's replaced with the child's own cartilage. A non-biodegradable scaffold, like the one Andemariam has, would not grow with the child.

The experiments require approval from each hospital's ethics committee.

The Stockholm operation is a landmark in the decades-long effort to engineer spare body parts, and it's not yet clear whether researchers will be able to fabricate more complex organs such as hearts and lungs rather than just hollow tubes such as windpipes, urinary tubes and blood vessels.

"It has taken 20 years of science to develop the scaffolds to a point where they become like natural tissue, and to develop cell handling techniques so they can be easily seeded on the graft and can grow," Green says.

He expects the field to accelerate from this point. "I checked my inbox this morning," he says, "and already had an email from a Boston surgeon who said, 'We have patients who could benefit from this, are you interested in collaborating?' "