Accessibility links
History Shows Medicare Cuts Can Spare Beneficiaries : Shots - Health News Most trims to Medicare's budget have not directly affected care for beneficiaries. Instead cuts in Medicare spending have been directed at hospitals, doctors and nursing homes. 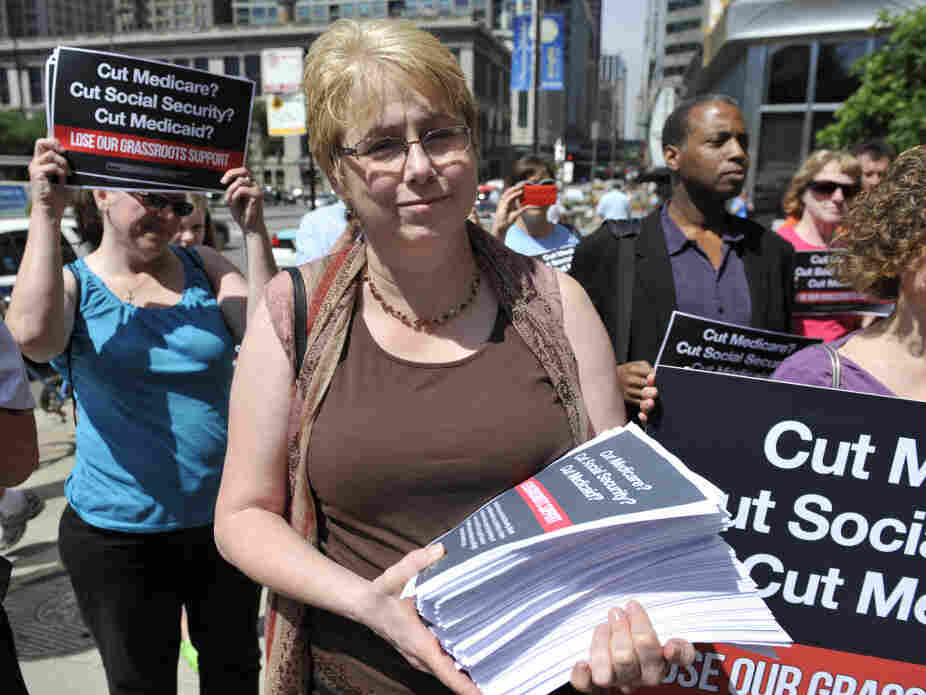 Jan Bees, a member of the Progressive Change Campaign Committee, opposes potential cuts to Medicare, Medicaid and Social Security. She and others walked to President Obama's campaign headquarters in Chicago last week to deliver 200,000 signatures from people who would refuse to donate or volunteer for his re-election campaign if Obama cuts entitlement programs. David Banks/AP hide caption 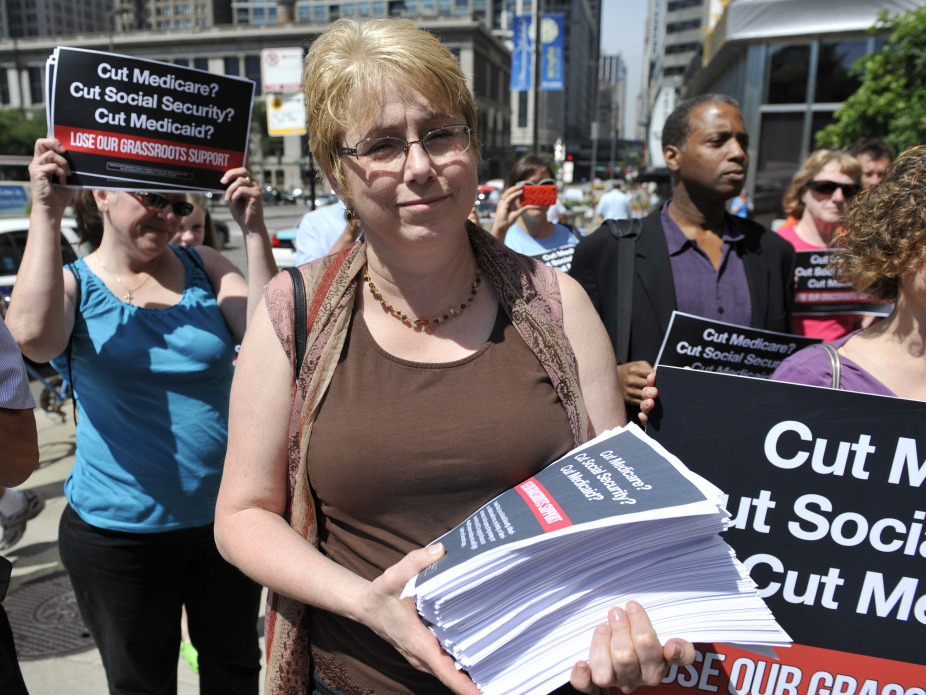 Jan Bees, a member of the Progressive Change Campaign Committee, opposes potential cuts to Medicare, Medicaid and Social Security. She and others walked to President Obama's campaign headquarters in Chicago last week to deliver 200,000 signatures from people who would refuse to donate or volunteer for his re-election campaign if Obama cuts entitlement programs.

Lately you'd think President Obama was threatening to push Granny off the cliff.

That's pretty much been the reaction of liberal Democrats to even the hint that the president might consider reductions in spending for Medicare as part of a deal to raise the nation's debt ceiling.

"Any cuts to Social Security, Medicare and Medicaid should be taken off the table," the Congressional Progressive Caucus wrote in a letter to the president. "These cuts would hurt households and damage the country's economic recovery as well."

But most of the outrage assumes — incorrectly — that any cuts would necessarily be aimed directly at Medicare patients. History suggests otherwise.

Because Medicare is such a huge budget target, "we've had a series of cuts, year after year, decade after decade," says Joe Antos, a health economist with the conservative American Enterprise Institute.

How big a target is Medicare exactly? This year the Congressional Budget Office figures the program for the elderly and disabled will spend $562.8 billion.

Even with all the cuts to Medicare over the years, Antos says, "We've hardly ever directly touched beneficiaries."

In fact, says Antos, who spent years estimating savings for some of those budget cuts at CBO, "the whole political history of (cutting) Medicare has been focused not on beneficiaries, it's been focused on health care providers," such as doctors, hospitals and nursing homes.

And in many of those cases, he says, beneficiaries have often not even felt the reductions in payments.

One example was the 1983 shift in the way Medicare pays hospitals from simply paying each bill to a prospective payment system, that paid a set amount per diagnosis. That encouraged hospitals to become more efficient.

"We saved an enormous amount of money by moving to that system, and in the process, we changed the way hospital service is delivered to people, for the better, I think" Antos says. "That was, I think a win for everybody."

Now it's true that most of the cuts have been reductions in scheduled increases, which served to restrain growth of Medicare's budget some.

And it's also the case that patients have been touched by Medicare payment changes, and could be again in the future. Higher-income beneficiaries now pay higher premiums for Medicare outpatient coverage as a result of the 2003 Medicare prescription drug law. And the budget plan passed by the House in April would shift considerable cost from the government to seniors on the program.

But Antos says beneficiaries are always last in line when it comes to making cuts in Medicare spending. "In terms of direct cuts to beneficiaries or benefits, that is a highly unpopular thing for a politician to do," he says.

Just ask all the Democrats who lost their seats last year after getting pummeled by Republicans who complained about the $500 billion in Medicare reductions in the Affordable Care Act, the federal law overhauling the health care system.

How many of those cuts directly increase costs or reduce access for beneficiaries? Zero.