Accessibility links
McDonald's Threatens To Cut Skimpy Health Plans : Shots - Health News It's been widely publicized that the new health law would require businesses offering insurance to spend at least 80 percent of their funds on medical care and eliminate caps on coverage. But it takes a threat from McDonalds to get people talking. 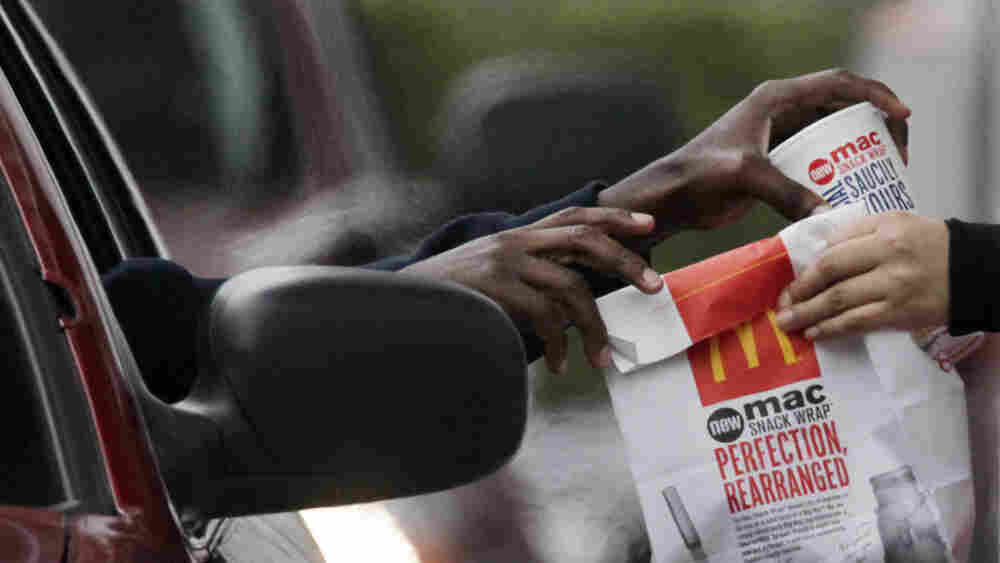 It's been only six months since health overhaul became law and just a week since the first provisions started kicking in. But evidently a quick review is in order.

Why? Some people seem shocked about a Wall Street Journal report that the bare-bones coverage McDonald's has been offering its employees might run afoul of the new law.

Plenty of people saw it coming. "Read it if you like," Dr. Aaron Carroll writes about the piece over at the Incidental Economist blog. "I enjoyed the story. I also liked it the first time I read it. In Politico. In June."

So here's the Shots refresher course: The main focus of the new federal health law is extending health insurance coverage to more people. It's also supposed make sure that the plans meet some minimum standards of quality, such as eliminating caps on coverage.

In fact, it's been widely publicized that the new federal health legislation requires insurers to spend at least 80 percent of their revenues on medical expenses as a way to make sure revenue goes to care, not administration and overhead.

Businesses have been bracing for months, particularly retailers who offer less generous plans.

Now the reality is hitting. "These regulations are set to make sure plans provide a certain amount of benefits, and no caps," Carroll tells Shots. "That was the point." Besides being a blogger, Carroll is an associate professor of pediatrics and associate director of Children's Health Services Research at Indiana University School of Medicine, and the director of the Center for Health Policy and Professionalism Research.

The Journal story today focuses on a letter that McDonald's sent to the feds yesterday, warning them that its coverage for nearly 30,000 employees was in jeopardy unless it got a waiver.

"It would be economically prohibitive for our carrier to continue offering the ... plan unless it got an exemption from the requirement to spend 80% to 85% of premiums on benefits," the letter says, according to the Journal.

McDonald's didn't say what the ratio is they are spending on care is now, but it must be considerably less than 80 percent, because they are raising a fuss.

But they've now also revealed that even their premium plan taps out at $10,000 of coverage. The cheapest plan runs out at $2,000.

McDonalds told the Journal that it would "look for other insurance options if it couldn't get the waiver."

But if the company did decide to drop the coverage, what are the workers' options?

"The truth of the matter is, and one of the quibbles I've always had is, for a fair number of Americans, the law leaves a lot of people hanging out [until 2014]," says Carroll.

Some of them may qualify for Medicaid, and some of them may be under 26 and have the potential to go back on their parents' plans, he says. They won't be eligible to go into the new health exchanges until 2014, when those exchanges are up and running.

Over at Forbes, David Whelan blasts McDonald's over its insurance and posturing, saying the company is "also admitting, publicly, that the benefit it calls health insurance, which it offers its workers for $14 a week–is actually rubbish."

His suggestion: go to Starbucks for your morning coffee. Yes, you'll pay more, but the workers have a better health plan.

Media reports stating that we plan to drop health care coverage for our employees are completely false...McDonald's is committed to providing competitive pay and benefits, and the strongest employment opportunities possible.

A White House spokesman also told us that McDonald's has applied for — and has received — a waiver that would allow it to continue capping benefits.

What's still up in the air is what will happen when the 80 percent benefit requirements kick in, he said. Those regulations have yet to be written.

A statement HHS released last night says that the new law "provides significant flexibility to maintain coverage for workers" and that the administration is working closely with businesses like McDonald's to protect health coverage.