Accessibility links
Shark Bites No Match For Dolphins' Powers Of Healing : Shots - Health News A researcher hopes that learning how dolphins resist infection and use stem cells to rebuild tissue will provide some insight into how to help injured humans. 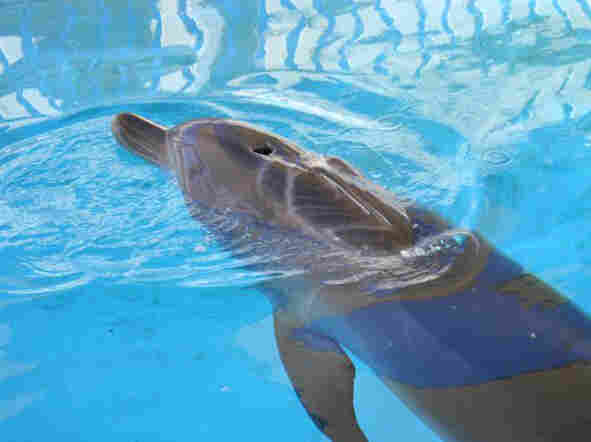 Nari, a dolphin bitten by a shark in February 2009, was almost completely healed one month later. Courtesy of Dr. Michael Zasloff hide caption 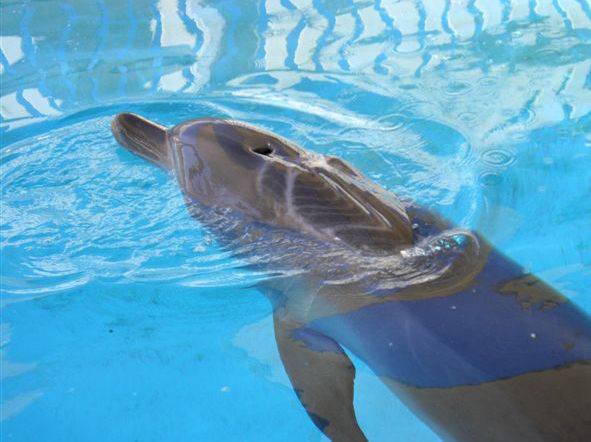 Nari, a dolphin bitten by a shark in February 2009, was almost completely healed one month later.

Dr. Michael Zasloff, a surgeon and researcher at Georgetown University, is famous for discovering compounds in the skin of frogs and sharks that can fight disease in humans.

Now, he's tapping another animal to mine the secrets of its immune system. It turns out dolphins have a remarkable ability to heal quickly—and seemingly painlessly—from severe shark bites. Zasloff hopes that learning how dolphins resist infection and use stem cells to rebuild missing tissue will provide some insight into how to help injured humans.

To do this research, Zasloff reviewed the "clinical histories" of a few dolphins who recently succumbed to shark bites. He also interviewed all the dolphin experts he could find. His results appeared in a letter in the online version of the Journal of Investigative Dermatology.

Shots caught up with Zasloff last week to learn more about his adventures in dolphin biology.

Q: OK, so imagine a human and a dolphin both being bitten by a shark. How would the healing process differ between the two?

Well, the dolphin wouldn't hemorrhage...or have any infection, which is miraculous. And despite having sustained massive tissue injury, within about month the animal will restore its normal body contour. There'll be some surface markings, but a chunk of tissue maybe the size of a football will have been restored with essentially no deformity.

And what is equally amazing is that handlers who know these animals will tell you that they observe absolutely no indications in the animal's behavior that it's in pain.

Q: And the human?

Even if it was a tiny bite, we would die of sepsis, or infection, within three or four days if we weren't given antibiotics because sharks have a lot of dangerous bacteria in their teeth. Then we'd have to make sure all the [infected tissue] was removed. If we were lucky and got it all, we'd still have this massive hole, which you may or may not be able to fill.

Q: Why are dolphins so good at healing?

Dolphin blubber makes compounds like organohalogens that act as natural antibiotics and keep the tissue from getting infected.

The next mystery is the recovery of contour [of the body]. When the animal restores its wound, it regenerates the complex structure of blubber. It doesn't create a scar; it produces a sort of patch that ultimately is woven back into the surrounding tissue.

What is exciting is that there must be great numbers of stem cells [involved], and by looking at these stem cells, we would probably be able to identify what they are and possibly even the hormones or proteins that are involved in their expansion. And if we looked for comparable cells in man, these might be the very cells that we would want to use to promote healing of complex wounds in us.

Q: So what are the next steps for research?

Identification of the antimicrobial agents, which have to be in those tissues. All you'd have to do is take some dolphin blubber, extract it, and start looking for stuff that would kill bacteria.

And with the pain issue, it's the same thing. You would take the blubber or the regenerating tissue, you'd isolate stuff—purified components or crude—and you'd administer it to mice. And lo and behold, you may find, in the regenerating tissue or the decomposing blubber, the long-sought natural morphine that we've been looking for.

Q: You've gone through the process of drug development with some of the compounds you've found in the tissue of other animals—frogs, for instance. How long before we see dolphin-inspired therapies?

I wish I could work on this, but I don't have access to dolphins. So I'm just putting this out there for other researchers to see. Once you appreciate that this is kind of a miracle, it isn't terribly hard to come up with ideas [for how to do the research]. The hardest part is to realize that there's a miracle in your midst.