Accessibility links
Countdown To 7 Billion: A Tale Of Two Worlds : Shots - Health News The United Nations says that the seven-billionth person will soon be born into this world — most likely in India, which is on track to overtake China as the most populous nation in just 16 years. Less-developed regions of the world will be responsible for nearly all the global population growth for the next four decades, while the richer nations' population growth looks to be flat. 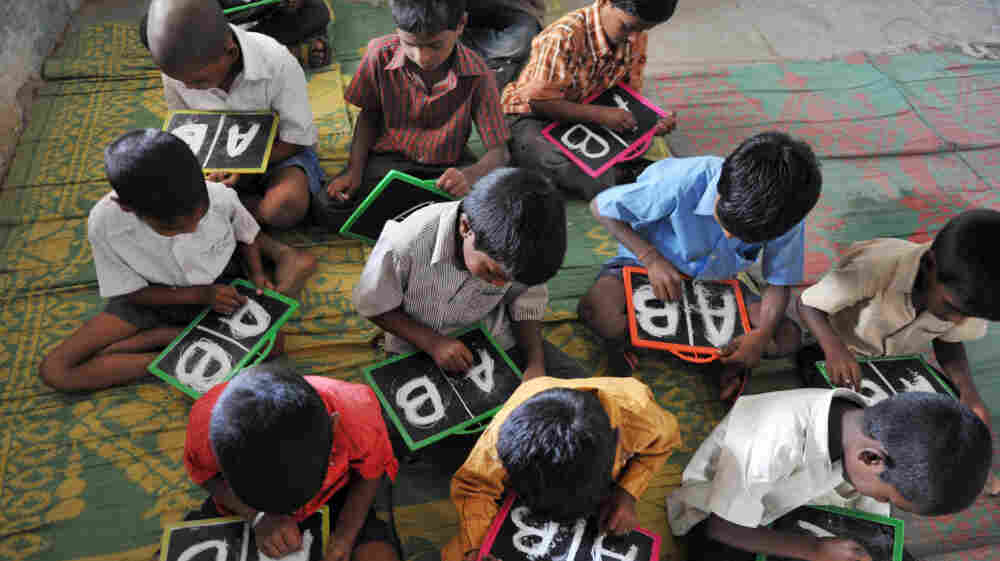 Indian schoolchildren write English alphabets on slates at a primary school outside Hyderabad in June. India is on track to overtake China as the most populous nation in just 16 years. Noah Seelam/AFP/Getty Images hide caption

The United Nations says that sometime around Halloween the seven-billionth person will be born into this world — most likely in India, which is on track to overtake China as the most populous nation in just 16 years.

This latest milestone may not come as a surprise. But it is remarkable nonetheless. It took Earth 50,000 years to reach the one billion mark. By 1960 there were three billion souls. Since then we've added another billion every decade, or less.

But demographer David Bloom of the Harvard School of Public Health points out that when it comes to population growth, there are literally two different worlds.

Bloom makes the case in an analysis in this week's issue of Science, which has a special section commemorating the seven-billion milestone and cogitating over the perennial question of whether the demographic trend spells "doom or vroom," as the journal's editors put it.

"The less-developed regions of the world are and will be responsible for nearly all the global population growth for the next four decades," Bloom tells Shots. "In 1950, 68 percent of the world's population resided in developing regions. Today that's up to 82 percent. But in the year 2050 it's projected to be 86 percent."

By contrast, the richer nations' population growth is essentially flat — except for the United States, which is "a bit of an outlier," Bloom says, because of the "population momentum" generated by the baby boom and substantial immigration.

Bloom says policymakers around the world need to pay attention to the implications of such radically skewed population growth in the less developed nations.

"Developing countries tend to be the most politically, economically, socially and environmentally fragile countries in the world," he says. "And the fallout of rapid population growth in those countries can spill over in many negative ways to other countries."

But Bloom is not the despairing type, and points out that life expectancy increased by two decades between 1950 and 2000 and will jump another decade in the lifetimes of many now alive. "That is a truly astonishing human achievement," he says.

He also notes the tremendous drop in average fertility rates, from five children in 1950 to 2.5 children today. There's hope in that statistic, but Bloom says fertility needs to fall further to avoid ugly scenarios, such as one laid out by Science's editors.

They warn of "cluster bombs" of demographic disaster in rapidly growing countries such as Nigeria and Pakistan that are already "hobbled by poor governance and... have huge numbers of poorly educated young adults without job prospects."

But with wider access to contraception and concerted attention on infant and child health — basic vaccinations and primary health care — parents in developing countries will opt to have fewer children, who will have a better shot at a tolerable or even prosperous life.

"This is a win-win situation because we'll end up having healthier populations and we'll also have less population pressure," Bloom says. "That...promotes economic well-being through a process we call the demographic dividend." That's a window of economic opportunity that opens when the crushing burden of unemployable young people is alleviated.

But there's nothing inevitable about this prospect, of course. Bloom says policymakers in richer countries are currently preoccupied – with good reason – with their own demographic problems, which are a "birth dearth" and rapidly aging populations.

A more global perspective that encompasses both sides of the world's divergent demographics is what's needed, he says, and soon.