Accessibility links
Salmonella Risk Leads To Ground Turkey Recall : Shots - Health News Food giant Cargill is shutting down a plant in Springdale, Ark., and recalling turkey processed there because the meat may be contaminated with a strain of salmonella resistant to multiple antibiotics. 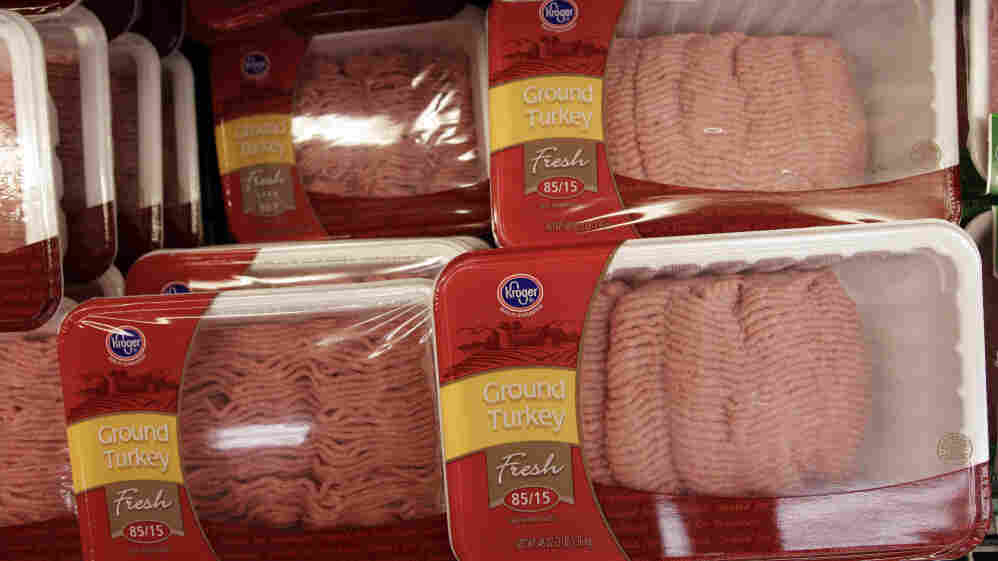 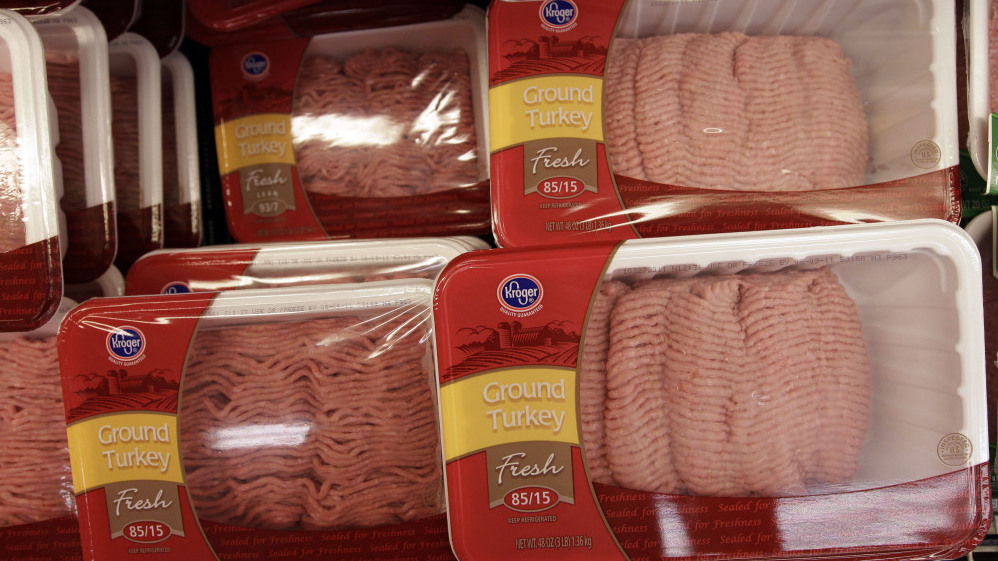 Concerns about salmonella contamination led Cargill to recall 36 million pounds of ground turkey sold under many different brand names, including these packages at a Kroger grocery store in Redwood City, Calif.

When it comes to food recalls, Cargill's decision to pull 36 million pounds of ground turkey from the market is a big one — a really big one.

The food giant's taking the action for turkey produced at a plant in Springdale, Ark., because the poultry may be contaminated with a strain of salmonella resistant to multiple antibiotics.

Since March, at least 77 people have fallen ill, including one person who died, in an outbreak of infections with Salmonella Heidelberg, according to the Centers for Disease Control and Prevention.

Government investigators suspected contaminated ground turkey was the culprit, but they've had a hard time pinning down the source. About half the ill people from whom investigators could get detailed information said they'd eaten ground turkey.

Now Cargill is shutting down the Arkansas meat plant while it looks to pinpoint the source of contamination. "It is regrettable that people may have become ill from eating one of our ground turkey products and, for anyone who did, we are truly sorry," Steve Willardsen, president of Cargill's turkey processing business, said in a statement.

You can find an itemized list of the affected products, which have "use or freeze by dates" ranging from Feb. 20 to Aug. 2 or Aug. 23, on the Cargill website here or the USDA's here.

Another way to see if turkey in your refrigerator is subject to the recall is to look at the USDA's inspection mark. The Cargill plant in Arkansas has the establishment number P-963. Later, as the USDA gets more info on where the turkey was sold, it will be posting a list of the stores here.

In any event, you can lower your risk of salmonella from ground turkey, or any other food, with proper handling and cooking. The USDA says to wash your hands well, before and after handling raw poultry and meat. Keep the stuff away from foods that won't be cooked and use separate cutting surfaces. Then, when it comes to poultry, make sure you cook it to at least 165 degrees Fahrenheit.

In 2008, the government found that 78 percent of turkeys testing positive for salmonella were contaminated with strains resistant to at least one type of antibiotics. The USDA says antibiotics may be given to turkeys "to prevent disease and increase feed efficiency."

The size of the latest outbreak has renewed calls for the government to take action against the use of antibiotics in healthy food animals.