Accessibility links
Salty Snacks For Baby? Even Infants May Get Too Much Sodium : Shots - Health News As many as 70 percent of 8-month-old babies consumed too much sodium, according to a study in the U.K. Many infants are eating the wrong kinds of foods — like canned, processed fare, researchers say. But even seemingly healthful options like bread and cereals can be loaded with salt.

Salty Snacks For Baby? Even Infants May Get Too Much Sodium

Salty Snacks For Baby? Even Infants May Get Too Much Sodium 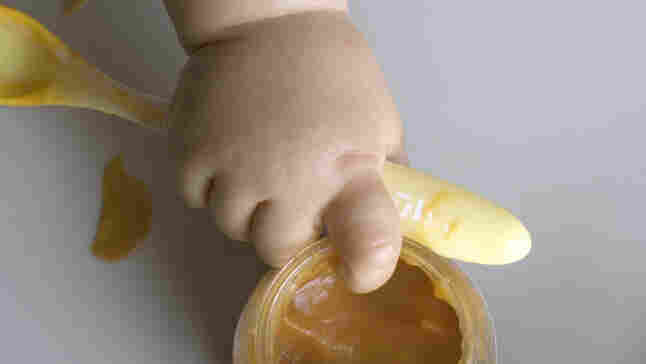 Salt is a delicious devil ingrained in our diets, with implications for taste and health. Cutting back on salt is a challenge, even for the youngest eaters, it turns out, because processed foods contain so much of the stuff.

In fact, as many as 70 percent of 8-month-old babies in the U.K. consumed too much sodium, according to a study in the European Journal of Clinical Nutrition. That's bad news because it could potentially harm "developing kidneys and blood pressure in later life," warn the researchers, from the University of Bristol in the U.K.

The researchers looked at the diets of 1,178 8-month-old British infants born in 1991 and 1992 who were enrolled in the Avon Longitudinal Study of Parents and Children, a long-term, ongoing health survey in the Bath and Bristol region of England. They examined three days' worth of diet diaries kept by moms in the study and found that a majority of the infants took in more than 400 milligrams of sodium per day, the maximum daily intake recommended under U.K. guidelines. Many babies got more than twice that amount.

It's true those babies are now young adults, and sodium levels in many foods have dropped in the U.K. thanks to a big public health push since those kids were born. Still, the researchers say far too much salt remains in the food supply.

Why are babies getting too much salt? The problem is two-fold, study co-author Pauline Emmett tells Shots. For one thing, parents aren't choosing the best foods for their babies when introducing solids. Infants in the study with the saltiest diets ate canned spaghetti, baked beans and other processed, adult fare.

Many were also drinking cows' milk, which has much more naturally occurring sodium than both breast milk and formula — one of the main reasons why doctors advise against giving it to children under a year old.

But even when parents made seemingly sensible choices — like bread and breakfast cereals — those foods also turned out to have much more salt "than any of us realize or need them to," says Emmett, a senior research fellow at the University of Bristol's Centre for Child & Adolescent Health.

"We need to tackle manufacturers to get these levels down for all of us, not just babies," Emmett says.

Though the study looked at U.K. infants, "there is no inherent reason to believe that U.S. infants are any different," says Dr. Jatinder Bhatia, who chairs the nutrition committee for the American Academy of Pediatrics. He tells Shots the group is trying to encourage the food industry to reduce salt across the board.

The U.S. doesn't have a maximum recommended intake for children under 1, but it does have adequate intake levels — sort of like a recommended dietary allowance — set by the Institute of Medicine at 370 mg of sodium per day for 6-to-12-month olds. National data from the 1990s show that U.S. infants are also taking in way more than this level: about 645 mg on average.

The AAP recommends that parents avoid introducing solid foods before 4-to-6 months of age. But once baby tastes that salty goodness, keeping tabs on sodium intake can become a lifelong challenge, says Bonnie Liebman, director of nutrition at the consumer advocacy group Center for Science in the Public Interest, because "most of the foods you get in the supermarket, even most restaurants, are just loaded with sodium."

As for the babies in the study, "we have almost finished a paper following these children through childhood — with luck it should be published by the end of the year," Emmett says. "Salt intake does not get less."