Accessibility links
Antidepressant Use Climbs, As Primary Care Doctors Do The Prescribing : Shots - Health News More and more people are taking antidepressant medications. Most antidepressants aren't prescribed by psychiatrists, raising questions about whether people are prescribed drugs they don't need or are suffering without help.

Antidepressant Use Climbs, As Primary Care Doctors Do The Prescribing

Antidepressant Use Climbs, As Primary Care Doctors Do The Prescribing 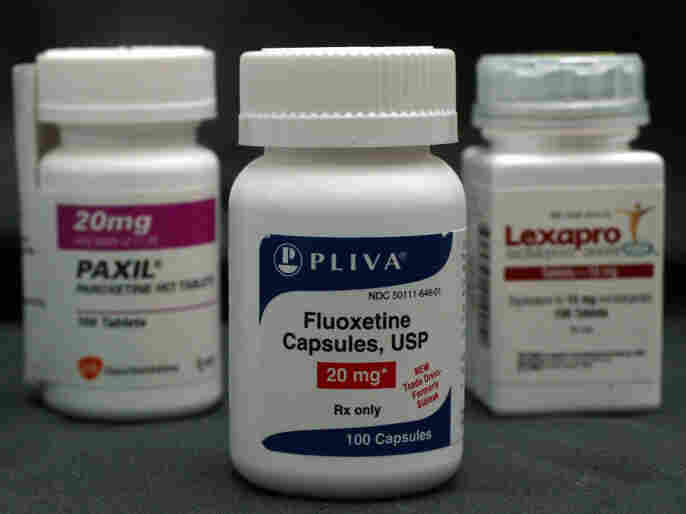 Antidepressants like these have become the second-most prescribed type of medicine in the U.S. Joe Raedle/Getty Images hide caption

Antidepressants have become some of the most commonly used drugs in the United States, yet most of them aren't prescribed by psychiatrists.

And what's more, almost three-quarters of the prescriptions are written without a specific diagnosis, according to a new study, raising the question of whether antidepressants are being prescribed too often.

Americans shell out about $10 billion a year for antidepressants, and they're the second-most-prescribed drug, right after drugs to lower cholesterol.

Seven percent of all visits to a primary care doctor now involve a prescription for antidepressants, according to the study, which was just published in the journal Health Affairs. That's up from 3 percent in 1997, according to Ramin Mojtabai, an associate professor at Johns Hopkins Bloomberg School of Public Health, and a co-author of the study. The researchers used data collected by the Centers for Disease Control and Prevention on office visits.

That 7 percent is remarkably close to the percentage of adults with major depression each year, so you could say that primary care physicians are doing a better job of recognizing depression and treating it. Compare that to the fact that psychiatrists increased their prescribing just a tad over the same time, from 1.7 percent to 2.4 percent.

Doctors wrote 254 million prescriptions for antidepressants last year, according to IMS Health, which tracks the pharmaceutical industry. That's up from 231 million in 2006.

The reality is that most people in the United States don't have access to a psychiatrist, either because there isn't one where they live, or they don't have insurance coverage for psychiatric care. Most mental health care is delivered by family physicians, pediatricians, and internists.

Only about half of people with major depression are getting any treatment at all, according to the National Institute of Mental Health. Antidepressants are effective in treating depression, but they don't work for many people.

In a perfect world, the people who don't get relief from an antidepressant prescribed by their regular doctor would then be referred to a specialist. But that doesn't happen as often in real life. So people are at risk of not getting the treatment they need, or of being unnecessarily prescribed antidepressants by a harried primary-care doctor who doesn't have the time or the training to properly diagnose mental disorders.

Doctors should be better educated on diagnosing depression, and also on the limits of antidepressants, the authors of the Health Affairs study say. "There's not enough focus on a good match between indications and treatment," Mojtabai tells Shots. "That's not happening."

And, he adds, much of the information that patients and doctors get comes from advertising from pharmaceutical companies selling the drugs. "If a physician suggests you would benefit from antidrpressants, ask, 'Do I fit the criteria? Will the medication be more effective than placebo?' "