Accessibility links
HIV In The Middle East And North Africa: Hidden 'Behind A Veil'? : Shots - Health News HIV isn't openly discussed in Middle Eastern societies. New data give a much clearer picture of its prevalence and how governments do and don't respond. We speak with one researcher who explains the challenges of studying a topic taboo in the region. 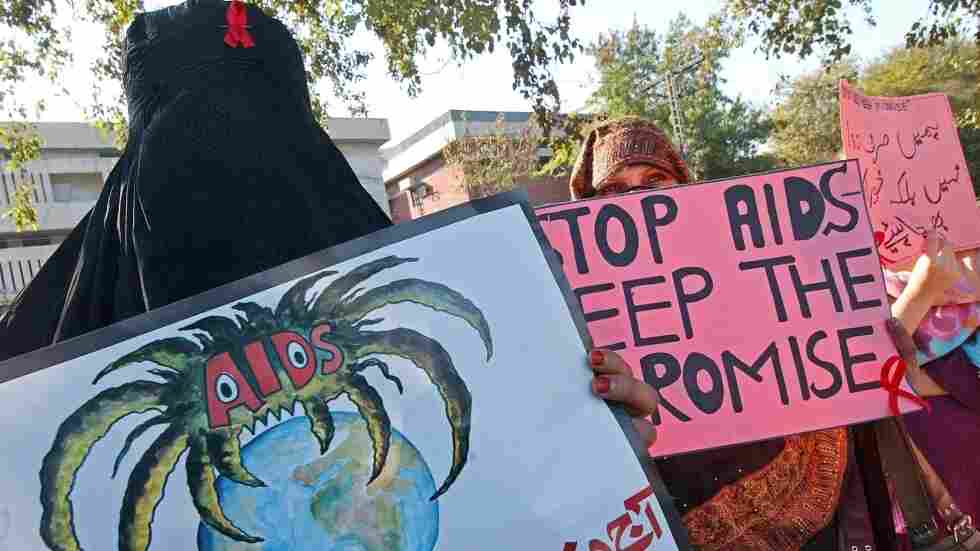 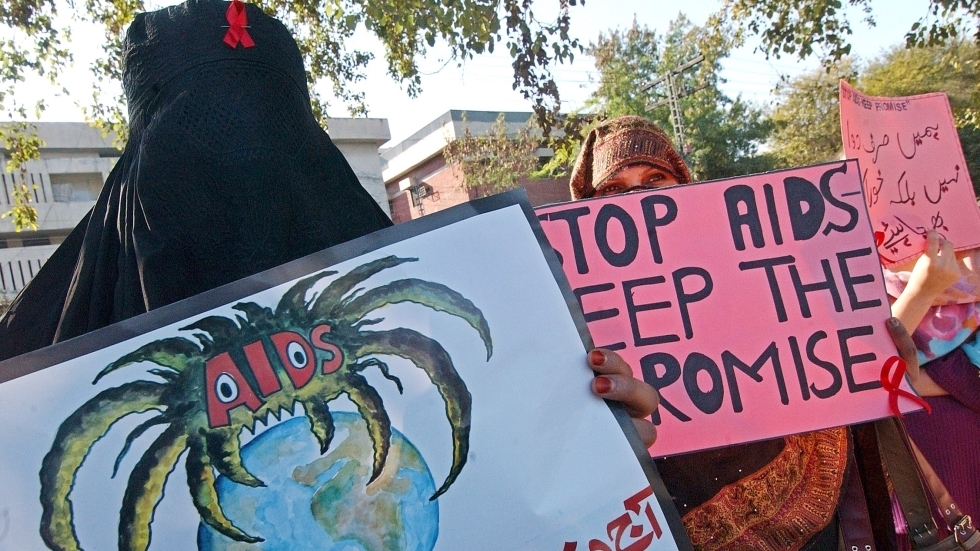 Pakistani NGO workers protest at a rally on World AIDS Day in Peshawar in 2006.

HIV epidemics are emerging among men who have sex with men in the Middle East and North Africa, researchers say. It's a region where HIV/AIDS isn't well understood, or studied.

More than 5 percent of men who have sex with men are infected by HIV in countries including Egypt, Iran, Lebanon, Morocco, Sudan and Tunisia, according to a recent study in PLoS Medicine. In one group of men in Pakistan, the rate of infection was about 28 percent. (For reference, in 2008, rates of HIV infection among men who have sex with men in the U.S. ranged from 16 percent among white men up to 28 percent of black men, according to the CDC.)

Risky behavior, low condom use, injectable drug use and male sex workers are some of the factors that could cause HIV rates to rise in the region, the researchers say. On average, the men who have sex with men group had between four and 14 sexual partners within the past six months, with consistent condom use falling below 25 percent.

Lack of HIV surveillance and low access to treatment and prevention are a concern for researchers, who believe the window of opportunity to prevent the epidemic from spreading across the region is growing smaller.

Shots had a chance to speak with one of the study's authors, Dr. Laith Abu-Raddad, assistant professor of public health at the Weill Cornell Medical College in Qatar, to discuss the challenges of researching such a taboo topic.

What made you decide to pursue this study?

There are some political and community leaders who believe that our region is not affected by the epidemic. While others, such as HIV activists, believe that men having sex with men behavior is hidden, so HIV data must be hidden. They have called it the "HIV epidemic behind the veil." It occurred to me that these are very contrasting views, and the truth must be out there somewhere.

I started this work eight years ago, to get every piece of evidence that we have on HIV. Turns out that there are more data than we think. The regions are not hiding the data, it's just a sensitive issue. These issues aren't discussed like in the western media. But it doesn't mean that the government isn't dealing with it. Governments do have programs such as active non-government organizations, NGOs, working with groups that are infected.

What surprised you about the findings?

Certain countries did surprise us with the work they've done. In Iran, they target the population of drug users. When Iran discovered HIV among drug users, they created programs that offered drug users access to treatment, and gave them free clean needles and syringes.

Many governments don't want to provide HIV treatment or counseling directly. They support NGOs financially and logistically to help treat communities affected. It's a way for them to protect people without raising sensitive issues of sexual and drug use behaviors that are often controversial.

What challenges did you face while gathering evidence?

There were some governments that gave us their data on the condition that we didn't publish it. They want to deal with this issue, but they see no reason to raise it to the public. There were governments who did not want to release data. I can't tell you which countries, since we have long-standing relationships with them. But we managed to convince some of them that the data would be used purely for scientific research and not used against them by the media.

What do you hope to accomplish from this study?

To raise awareness among policy makers. Hopefully, governments will make changes to policy. Surprisingly, the No. 1 barrier is poor research capacity in this region. If we don't have the scientific data, we can't have effective policy. We need to have an effective surveillance program, so we can help prevent further HIV transmission.

This part of the world is seen as not addressing the epidemic. Countries like Iran, Morocco and Egypt are developing programs and working with NGOs. But other countries haven't yet improved their services to the public. But we hope they will.