Accessibility links
People With Arthritis Shun Exercise — Though It Would Help, Not Hurt : Shots - Health News People with osteoarthritis in their knees aren't getting much exercise, a new study finds, even though exercise actually helps reduce pain and stiffness and can prevent future disability. So how to get moving if you've got arthritis? Try walking and swimming, doctors say. 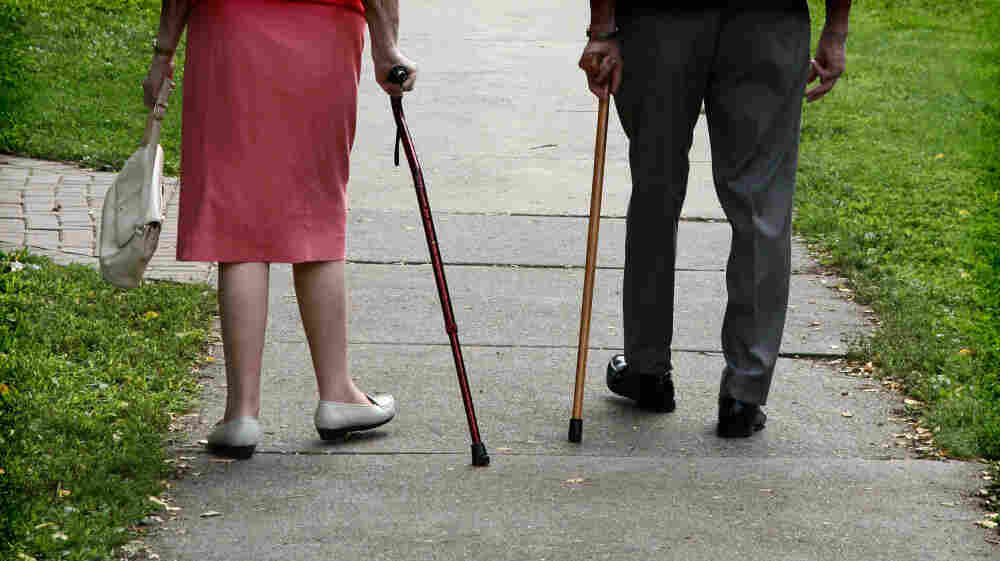 People with knee arthritis are doing a lousy job of getting exercise, according to a new study. That's not a huge surprise. Who wants to run with aching knees? It's human nature to want to coddle aches, not exercise them.

But exercise is actually good medicine for osteoarthritis. It is proven to reduce pain and inflammation, makes it easier to move, and can prevent or delay disability.

Alas, the people with knee arthritis tracked in this new study are not doing themselves any favors on that front. A majority of the women (56.5 percent) and lots of the men (40 percent) were inactive. That means they got no exercise that would count as moderate (like brisk walking) or vigorous (biking or running) for at least 10 minutes anytime in the course of a week.

"Physical activity for people with arthritis is a key to better health, without question," says Dorothy Dunlop, an associate professor of medicine at Northwestern University's Feinberg School of Medicine. But she knows the reality. "They are dealing with pain and stiffness and barriers to being active."

Her new study, published in the August issue of Arthritis & Rheumatism, tracked 1,111 adults ages 49 to 84 with knee osteoarthritis for a week using accelerometers, which are fancy pedometers. There was no display on the unit, so people didn't know how much, or how little, activity they had logged. Turns out their exercise levels were a lot lower than found in previous studies in which people self-reported on their activities.

A few of the study participants were getting a move on; 13 percent of the men and 7.7 percent of the women met federal physical activity guidelines: at least 150 minutes (2 hours and 30 minutes) a week of moderate-intensity exercise, or 75 minutes (1 hour and 15 minutes) a week of vigorous-intensity aerobic physical activity. But for that big group of arthritis sufferers who weren't doing squat, Dunlop says that just getting off the couch would be good. In other words, any activity is better than none.

"Walking is a wonderful exercise," Dunlop told Shots. "Just finding a neighbor you enjoy [talking with] and going out for a walk instead of talking over the fence would be a great way to weave that into your day."

Aside from asking one's doctor for advice on appropriate exercise, Dunlop recommends checking out local chapters of the Arthritis Foundation, which often sponsor water aerobics classes, as well as the local YMCA. Should getting wet sound unappealing, the foundation's website features exercise videos that can be followed in the comfort of one's TV room, right next to that now-neglected couch.