Accessibility links
Autism Risk 'High' For Kids With Older Sibling With The Disorder : Shots - Health News The overall risk that a younger sibling of an autistic child will also have the disorder is 19 percent, a new study finds. If the younger sibling is male, the risk shoots up to more than one in four. 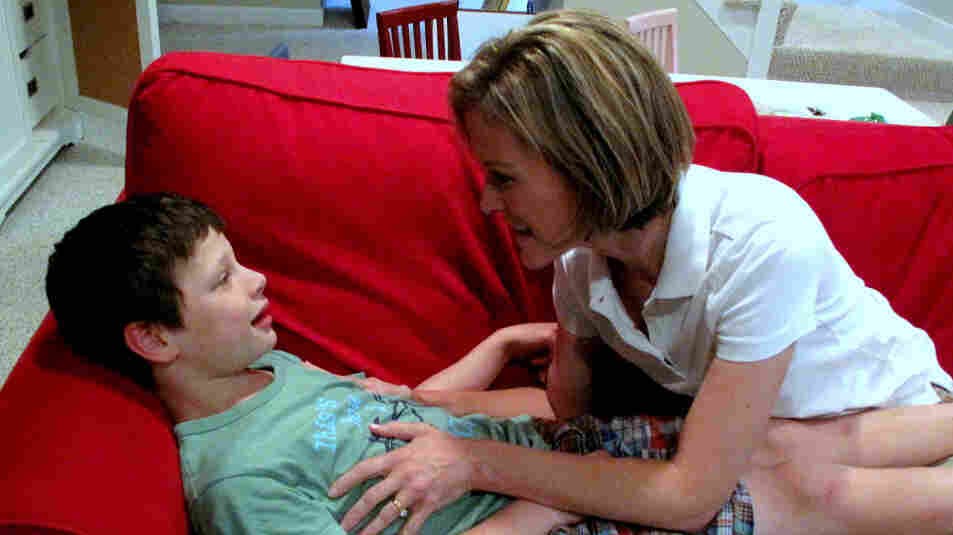 Judith Ursitti is a Massachusetts mother of two children with autism spectrum disorders. Her son, Jack, 7, has severe autism, while her daughter, Amy (not pictured), who is 11, has Asperger's. Richard Knox/NPR hide caption 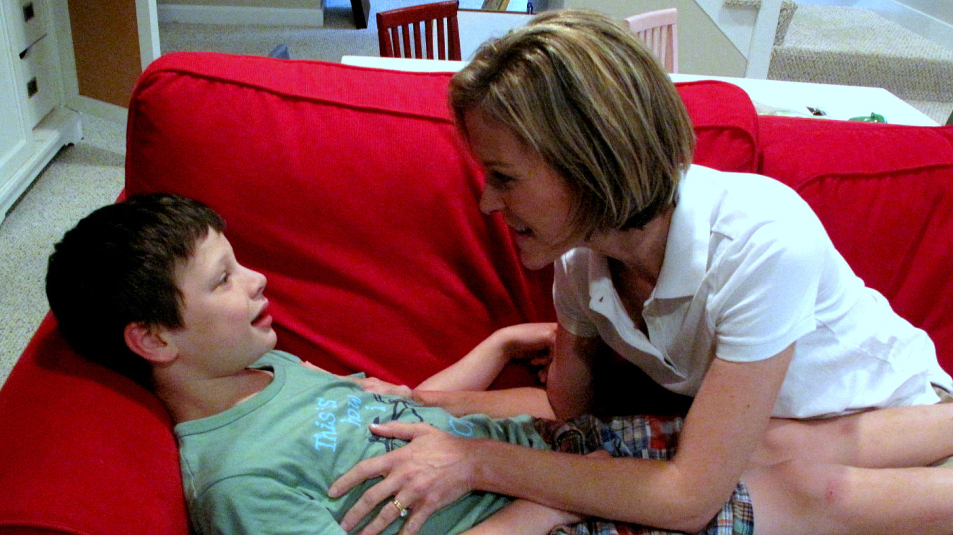 Judith Ursitti is a Massachusetts mother of two children with autism spectrum disorders. Her son, Jack, 7, has severe autism, while her daughter, Amy (not pictured), who is 11, has Asperger's.

Autism specialists have long thought the disorder has a strong genetic component -– maybe stronger than any other neurodevelopmental condition.

Now a new study — the largest so far to look at autism in younger brothers and sisters of an affected child — finds their risk of also having autism is higher than previously thought, especially if the younger sibling is a boy.

The overall risk that a younger sibling of an autistic child will have the disorder is 19 percent, the researchers found. Earlier, smaller studies had pegged the risk at 3 to 14 percent.

But if the younger sibling is male, the risk shoots up to more than one in four, according to the study, which appears online in the journal Pediatrics. "That's a really high rate compared to the risk of autism in the general population, which is 1 in 110," says Sally Ozonoff of the University of California, Davis, who led the research.

By contrast, if the younger sibling is a girl, her risk of autism is 9 percent.

And if a family has two or more children with autism, the risk among younger siblings goes up even more — to 1 in 3.

The study involved 664 infants in the United States and Canada with at least one older sibling affected by autism, ranging from mild types called "pervasive developmental delay" and Asperger's syndrome to the most severe forms. These younger siblings were monitored from the age of six to eight months until 3 years to see if they showed signs of having a disorder on the autism spectrum.

The new numbers have implications for researchers, for families affected by autism, and for pediatricians everywhere who see the younger sibs of autistic children during their early well-child visits.

"It's the first thing families ask: How likely is this to happen again?" Ozonoff says. "Parents are already concerned, already watching their child's development carefully. We are able to supply some answers."

But Ozonoff says maybe the most important message is for pediatricians.

"This should mean there is more careful monitoring and screening beyond the usual questions at a normal well-child visit," Ozonoff continues. "Drilling down into the things that we know are early signs of autism — interest in people, responding to their name, responding to other people, smiling at other people."

Alycia Halladay of the advocacy group Autism Speaks, which partially funded the study along with the National Institutes of Health, agrees that the new data refute a passive wait-and-see attitude toward children who have an older sibling on the autism spectrum — disorders ranging from Asperger's to being profoundly uncommunicative.

"It is our hope," Halladay says, "that by encouraging parents to seek careful monitoring of their child, we can really push the whole health care system into doing a better job at providing an earlier diagnosis for those who are affected, so more kids who have autism are identified earlier."

That can really make a life-changing difference, says Judith Ursitti, a Massachusetts mother of two children with autism spectrum disorders. Her daughter, Amy, who is 11, has Asperger's, while her son, Jack, 7, has severe autism.

"For decades, many people have heard the word 'autism' and they just thought 'hopeless,' " Ursitti says. "But there are therapies that, if done early and intensively by the right sort of professionals, can really cause someone with autism to dramatically improve and overcome the challenges of autism."

She regrets that her son Jack didn't get diagnosed until after age 2, when he failed to speak or point, smile at others or wave goodbye — despite the fact that he had excellent pediatric care.

Enrolled in a special school for autistic children, supplemented by behavioral therapy at home, Jack Ursitti is now communicating "more than we ever thought he would," his mother says.

Judith Ursitti, who works with Autism Speaks as a lobbyist for better insurance coverage of autism diagnosis and treatment, says many parents of autistic children won't be surprised by the new study. In fact, they might have expected that the chance of a sibling being affected was much higher.

"It's amazing how families are affected more than once," Ursitti says. "I remember when Amy started getting intervention for Asperger's, and she was with a group of girls for therapy. And they all had brothers who had autism. And I thought, 'Wow, this is incredible!' "

But Ozonoff, the study leader, says the data might be reassuring for families who mistakenly believed they had a much higher risk of having a second or third child with autism. For every younger sibling who is affected, four others will not be.

"No matter how alarming these statistics are — and truly they are for researchers and clinicians and parents — I also tell people that even in the highest-risk groups ... the likelihood of their baby not having autism is always much higher," Ozonoff says. "So, holding that baby in their arms, there is reason to hope."