Accessibility links
Registry Needed To Assess Silicone Breast Implants : Shots - Health News Manufacturers of silicone breast implants have done such a poor job of tracking patients that it's impossible to know if the devices have long-term health and safety risks, consumer advocates said a meeting of experts advising the Food and Drug Administration. 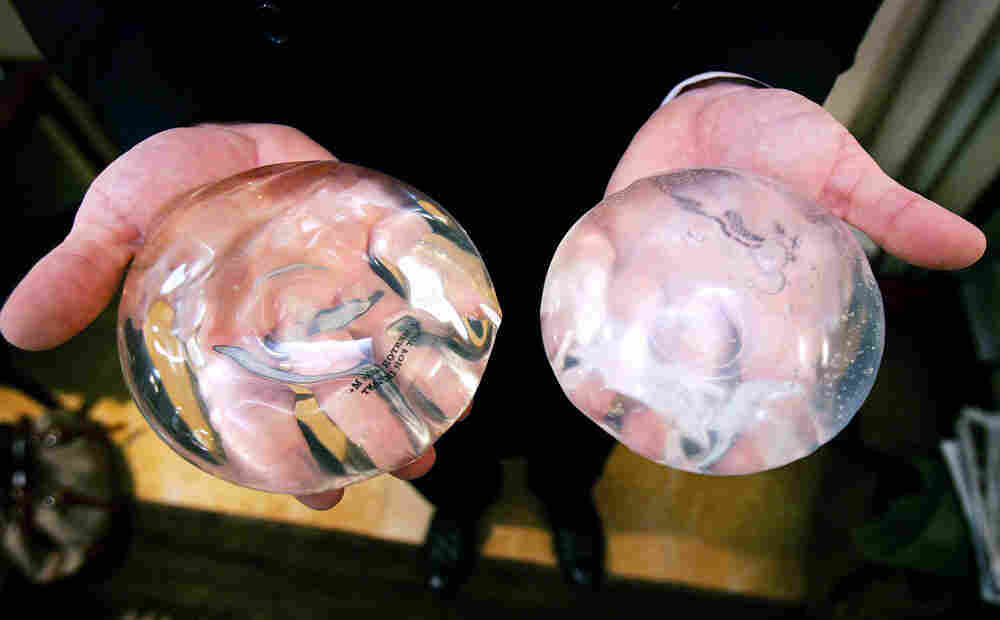 A silicone gel implant (left) and a saline gel implant. The FDA agreed to let implants return to the market in 2006, but stipulated that manufacturers track long-term side effects. Spencer Platt/Getty Images hide caption

Silicone breast implants can cause problems for women who have them, and many have to have surgery to remove or replace the devices within 10 years. But implant manufacturers have done such a poor job of tracking problems that a Food and Drug Administration advisory panel says it may be time for a nationwide database of women with implants.

The FDA had required the two manufacturers of silicone breast implants, Johnson & Johnson's Mentor subsidiary and Allergan Inc., to conduct 10-year-long studies on side effects as a condition of allowing the implants back on the market in 2006. After two years, about 60 percent of Allergan patients were still participating, but just 21 percent of Mentor patients were involved. The studies were supposed to follow 80,000 women.

"What we're left with is inadequate data," says Susan Wood, an associate professor at George Washington University's School of Public Health and former assistant commissioner for women's health at the FDA. The concern is that with so few women participating, there won't be enough data to really know if silicone implants pose long-term health and safety problems.

People who testified at an FDA hearing this week said women may have dropped out of the study because the 27-page forms women were expected to fill out were too burdensome. Or it could be because Mentor paid women and doctors small amounts of money to participate, while Allergan did not. The two-day hearing was held in Gaithersburg, Md.

Wood notes that other large studies like the Women's Health Initiative have managed to gather data for years. The fact that the companies quickly lost track of most breast implant patients, she says, means they had no real interest in the studies.

Consumer advocates say that the manufacturers' problems in tracking side effects like scarring and leakage shows that the FDA doesn't provide enough oversight of medical devices, which run from cosmetic implants to pacemakers and hip joint replacements.

"This is one of the most visible, controversial medical devices, and they can't even get the data right," Diana Zuckerman, president of the National Research Center for Women & Families, told Shots. "If this is what they're doing with the controversial, visible ones, what's happening to the ones we're not paying attention to?"

In July, the independent Institute of Medicine found that the FDA's system for overseeing the safety of medical devices was so flawed that it should be scrapped rather than retooled.

Several advisory panel members said the FDA's requirement that women have frequent MRIs to make sure the implants haven't ruptured is unrealistic and should be removed from the product label. Insurance usually doesn't pay for the scans, so most women don't get them done. But it's the only way to find out whether the implant has ruptured in the absence of symptoms.

FDA officials said silicone implants will stay on the market while they work with manufacturers and consumer groups to come up with ways to boost participation in the studies.

"FDA continues to believe currently approved devices are safe and effective," said William Maisel, deputy director of the device division for FDA. However, he added, "There is a significant complication rate." In June, the agency had reviewed the data from the manufacturers' studies, and termed the implants "generally safe."