Accessibility links
Doctors Call For Pullback On Narcotics For Chronic Pain : Shots - Health News An editorial published in the Archives of Internal Medicine says there's a troubling shortfall in the evidence to support the use of narcotics like Oxycontin for long-term treatment of pain. And, there's ample evidence of harm. 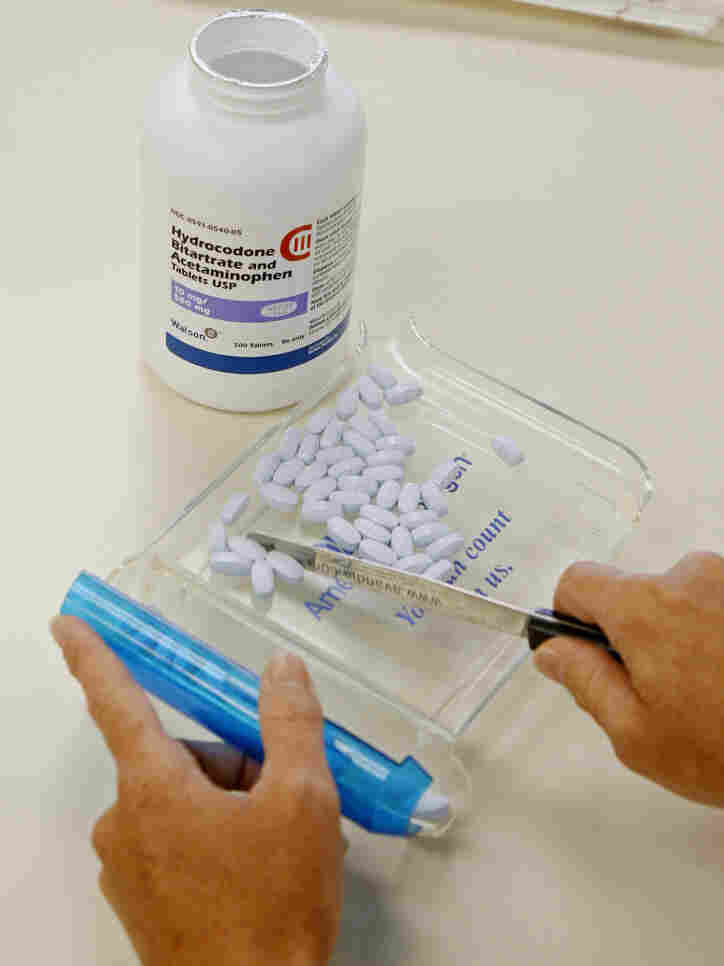 Painkillers like these being counted at the Oklahoma Hospital Discount Pharmacy in Edmond, Okla., need to be used far less often, some prominent doctors say. Sue Ogrocki/AP hide caption 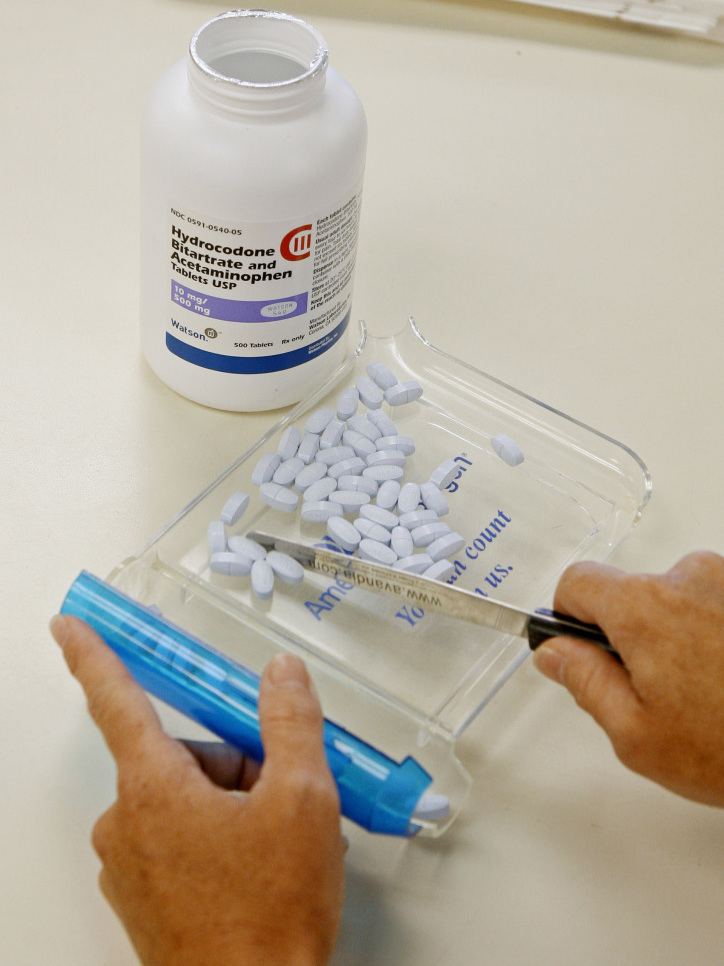 Painkillers like these being counted at the Oklahoma Hospital Discount Pharmacy in Edmond, Okla., need to be used far less often, some prominent doctors say.

In a bracing call to action, three doctors from California are telling their peers to think twice before prescribing potent narcotics for patients with chronic pain.

Drugs such as Vicodin, Percocet and Oxycontin have become among the most prescribed in the country. Between 15 and 20 percent of patient visits with physicians the U.S. include a prescription for an opioid, the modern painkilling medicines whose roots can be traced back to the opium poppy.

But their editorial, published this week in the Archives of Internal Medicine, says there's a troubling shortfall in the evidence to support the use of such drugs for long-term treatment of pain. And, there's ample evidence of harm.

"Unfortuantely, the use of prescription opioids currently results in more deaths in the United States due to intoxication than heroin and cocaine combined," says Dr. Mitchell H. Katz, a co-author of editorial, in a podcast. "That's shocking."

Doctors' prescriptions for the medicines that are supposed to decrease pain and improve patients' ability to function, he says, are "killing more people than two drugs that we think of as lethal, so much so that they're illegal." The death toll from the legal pain pills is about 12,000 a year, he says. "It's a public health problem."

So what's their prescription? Until there's more scientific evidence, doctors "should not continue to prescribe high-dose opioids" for chronic non-cancer pain. Narcotic drugs for short-term relief of pain are fine, but Katz says there's insufficient evidence to support their use over the long haul.

Instead, doctors should talk with patients about the limits of pain relief and give alternatives to opioid drugs, such as physical therapy or yoga, their due. To some patients, doctors may need to give a sobering message, Katz says in the podcast: "This is not something I'm going to be able to completely take away."

The bottom line of the editorial, part of a series in the journal called "Less Is More," is that a rethink on these narcotics is overdue.

What do the pain specialists think? I asked for a comment on the editorial, and got a statement from Dr. Roger Chou, who heads the group at the American Pain Society working on guidelines for clinical practice.

While it's important for clinicians to be more thoughtful about who they prescribe long-term opioids to and to stop opioids when they aren't helping or there is evidence that it is causing problems, the American Pain Society believes opioids have a role in the management of chronic non-cancer pain in carefully selected and monitored patients.

There is evidence from long-term observational studies and evidence coming from some long-term clinical trials that opioids are effective for improving pain in some patients.

For example, we do not believe that a trial of low doses of opioids should be denied to a low-risk woman in her 70's who has severe hip arthritis, who may be able to garden and walk with decreased pain on it.

While the data on overdose deaths and abuse of opioids should concern all members of society, it does not justify an extreme blanket position of no opioids for chronic non-cancer pain.