Accessibility links
Gamers Solve Stubborn Viral Mystery: The Shape Of A Key Enzyme : Shots - Health News What stumped scientists for more than a decade took gamers only three weeks to figure out. The structure of a key reproductive enzyme in AIDS-like viruses is finally known.

A screenshot from the Foldit puzzle for an enzyme found in HIV-like viruses. UW Center for Game Science hide caption 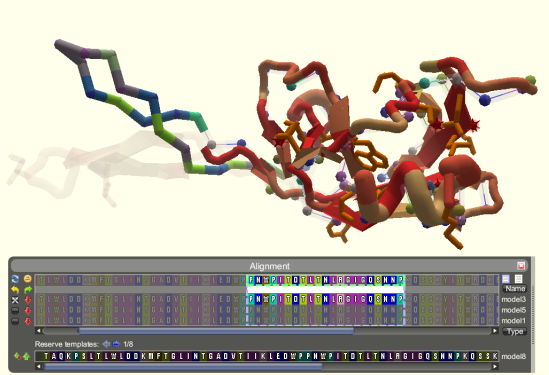 A screenshot from the Foldit puzzle for an enzyme found in HIV-like viruses.

An online group of gamers has correctly deduced the structure of an enzyme that AIDS-like viruses use for reproduction. By playing the online-game Foldit, the group figured out the structure of an important viral protein that has baffled scientists for more than a decade.

The enzyme is a retroviral protease and plays a critical role in how the AIDS virus matures and proliferates. Gamers, who weren't experts in viruses, solved the puzzle in just three weeks.

X-ray crystallography, the gold standard for protein structures, verified the result. The findings were published online by the journal Nature Structural & Molecular Biology.

More than 600,000 people have played Foldit since it was rolled out in 2008 by researchers from the University of Washington. "The game is like Tetris on steroids," Foldit co-creator Zoran Popovic tells Shots.

Gamers start with a protein that looks like a necklace. Instead of beads or pearls, amino acids hang from the strand. The game challenges players to manipulate the structure of the protein so that it reaches the lowest energy state, which earns them the highest score. The function of the protein changes with the shape it takes.

Gamers bring a different viewpoint to the table when it comes to solving scientific puzzles: freedom from scientific convention. "Humans can outperform the computers when you have to make a drastic move in order to get to the correct answer," Khatib says.

Sometimes to get to the right answer, a drastic or seemingly illogical decision has to be made. But a computer trying to solve a problem won't make an illogical decision that leads it down the wrong path because it can't always see that far ahead, the researchers say.

Scientists sometimes have related but irrelevant information flying around their problem-solving process that can blind them to unusual solutions. Gamers don't have the restrictions that scientists and computers impose upon themselves.

Khatib hopes that the gaming technology will catch fire with other scientists. "Citizen science can actually help solve unsolved scientific problems," he says.