To Die Or Not To Die From Spontaneous Combustion

To Die Or Not To Die From Spontaneous Combustion 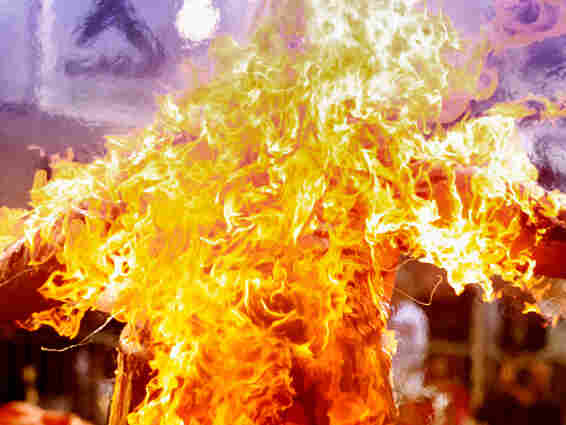 No so spontaneous: A stuntman burns during a controlled stunt in Ontario. iStockphoto.com hide caption 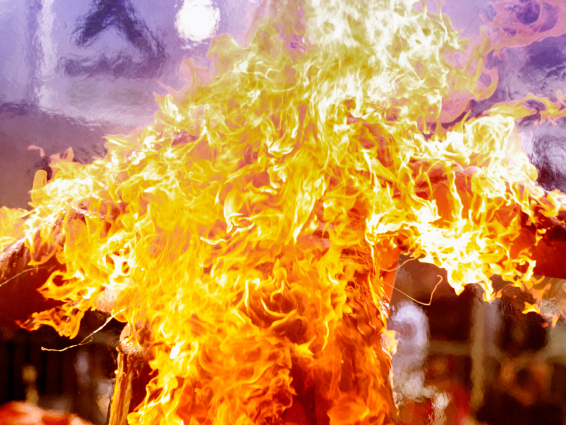 No so spontaneous: A stuntman burns during a controlled stunt in Ontario.

The lead singer of the fake rock band Spinal Tap, David St. Hubbins, famously uttered these words in the 1984 mockumentary This Is Spinal Tap: "Dozens of people spontaneously combust every year. It's just not widely reported."

If you believe today's news reports out of Ireland, St. Hubbins might have been onto something: Spontaneous human combustion can happen. But, we thought, really?

Here's a quick refresher for those who might have forgotten: Spontaneous combustion occurs when something (or someone) bursts into flames that originate internally. And according to the BBC, The Telegraph, The Irish Independent, and sundry other media outlets, an Irish coroner deemed it the cause of death in a nine-month investigation of a mysterious fire that killed a Mr. Michael Faherty, 76, in his home in December 2010.

"This fire was thoroughly investigated, and I'm left with the conclusion that this fits into the category of spontaneous human combustion, for which there is no adequate explanation," West Galway coroner Dr. Ciaran McLoughlin said in a statement.

Faherty's badly burnt body was discovered in his sitting room. Though there was a fire in the fireplace not far the body, McLoughlin said it wasn't the source of the fire that killed Faherty. He also said there was no damage to the room except for the ceiling above him and the floor beneath him.

And McLoughlin, it seems, was no novice detective. He said it was the first time in 25 years of investigating deaths that he had come to such a conclusion.

Yet we had to wonder, how does spontaneous combustion jibe with the laws of physics? So we called up Stephen Cina, a forensic pathologist and former deputy chief medical examiner of Broward County, Fla., to get an expert opinion on the matter.

Though Cina has written on thermal injuries and has more than 20 years in the field, he says he's never come across a single case of spontaneous combustion as a cause of thermal injury or death. The problem he says, is that "it's not well-documented that you could generate enough focal energy inside the body and burst into flame. It would have to start at some focus point, somewhere."

The notion has been posited by U.S. coroners before, he says, but usually when fully investigated, these cases turn out to be caused by cigarettes.

Will there be further inquiry into the fate of Faherty? It's not clear, but if there's any small lesson to be gleaned, it's that the wisdom of Spinal Tap hasn't been lost over the years.