Accessibility links
GAVI Alliance To Fund Vaccination Against Rotavirus And Pneumococcus : Shots - Health News The GAVI Alliance will introduce the rotavirus vaccine, which protects against diarrhea, in 16 developing countries. Some 18 countries will also get the pneumococcal vaccine, which could cut deaths from pneumonia and meningitis. 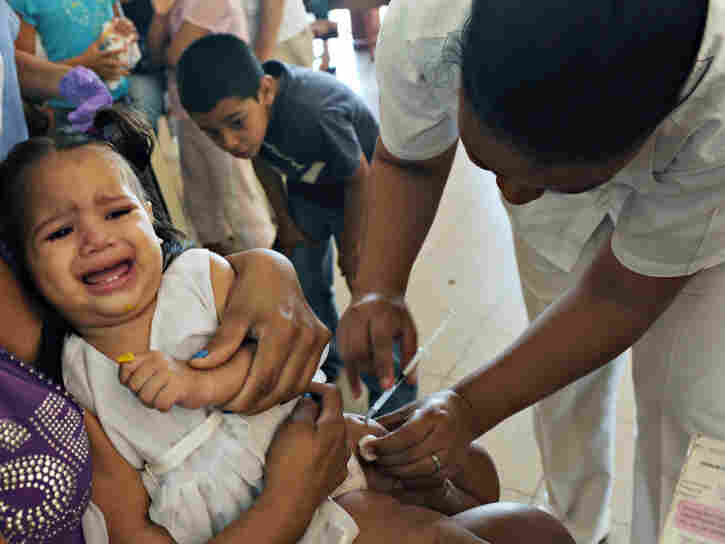 A nurse vaccinates a child against pneumonia at a healthcare center in Managua in January. Nicaragua received pneumococcal vaccines from the GAVI Alliance. ELMER MARTINEZ/AFP/Getty Images hide caption 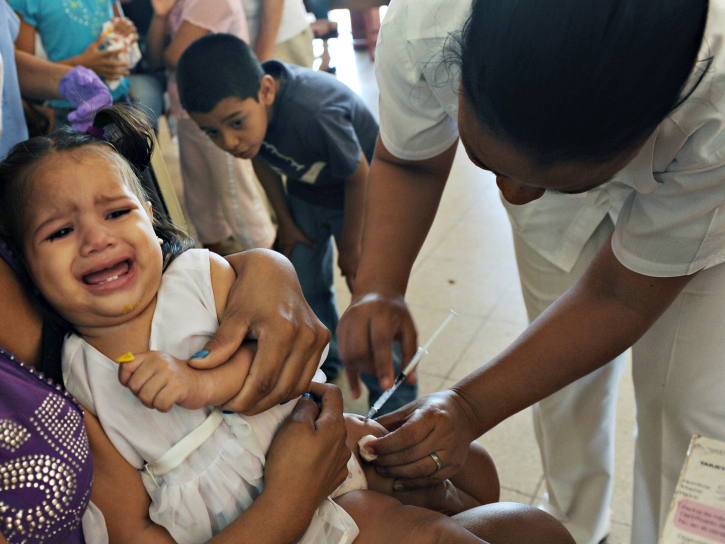 A nurse vaccinates a child against pneumonia at a healthcare center in Managua in January. Nicaragua received pneumococcal vaccines from the GAVI Alliance.

While Rep. Michele Bachmann's recent flap over the HPV vaccine was a reminder that some Americans are unsure that new vaccines are good for their children, Africans are in a very different boat.

Young children there still die daily from infectious diseases that vaccines can easily prevent. And now that new vaccines are available to prevent a common cause of severe diarrhea and pneumonia, African countries are clamoring for them.

Today the GAVI Alliance, a partnership of governments, donor agencies, the vaccine industry and philanthropists, said it is stepping up its delivery of a couple key vaccines in the region and 13 countries in other regions.

GAVI had already made available in Sudan a vaccine against rotavirus — which kills more than half a million children each year worldwide and is a leading cause of severe gastrointestinal illness in infants and young children. Now the group will introduce it in 16 more developing countries.

Some 18 countries will also get pneumococcal vaccine, which the group says will cut deaths from pneumonia and meningitis.

"We are giving children the best tools we have," said GAVI CEO Seth Berkley in a media briefing. "Where you are born will no longer define what protection your receive."

The announcement comes at a time when many global health groups are struggling to raise cash for programs from governments crippled by repeated economic slowdowns. In June, GAVI said it had surpassed its $3.7 billion funding goal for child immunization programs, with donors offering a total of $4.3 billion toward kids' vaccines.

And while developed countries and deep-pocked foundations like the Bill & Melinda Gates Foundation still pony up a lot of funds for GAVI, this year developing countries committed to GAVI to maintain or increase the share of financing for their vaccine programs.

In the 1980s, the World Health Organization, UNICEF, and other partners set out to achieve universal childhood immunization. But according to UNICEF, some 20 percent of the world's children still don't receive any vaccines. Anthony Lake, UNICEF's executive director, called them the "fifth child" in a recent speech.

Groups like UNICEF and GAVI have been working for years to distribute available vaccines. With this new push, Berkley says, GAVI will be focused on those children who are the hardest to reach, in the most rural areas and who are most at risk of disease.