Accessibility links
More Than 1 In 10 Parents Delay Or Skip Vaccinations For Their Kids : Shots - Health News Of the parents who don't follow the recommended timing for vaccinations, most refused only some immunizations — those against flu were ditched most frequently. 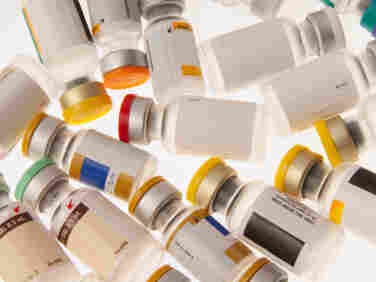 Sometimes when parents skip vaccinations for their kids, it's more a matter of delay than total refusal, a new survey finds.

More than 1 in 10 parent parents of young kids follow an alternative schedule of vaccinations that doesn't fit with the recommendations of doctors and public health officials. The results published in Pediatrics come from a national survey conducted online.

Of the parents who don't follow the recommended timing for vaccinations, most refused only some immunizations — those against flu were ditched most frequently. Parents who delayed vaccination were most likely to do so for chickenpox and measles-mumps-rubella. And parents were most likely to spread out the shots did so for the MMR vaccine and DTaP, against diptheria, tetanus and whooping cough.

Why are parents following a different path than the one recommended? The University of Michigan researchers found that a substantial majority felt it was safer for their kids to delay vaccination.

Another finding the researchers found troubling was that quite a few parents following the recommended schedule agreed with the proposition that delaying vaccines is safer.

To be clear, the evidence supports the CDC's recommendations — not the alternatives. Passing on vaccinations or delaying them raises the risks for the children, as well as the community.

An NPR Thomson Reuters Health Poll conducted in August found that a little more than a quarter of U.S. household had concerns about the safety and value of vaccines. Twenty-one percent of respondents said they believe vaccines are linked to autism, despite evidence to the contrary.

At the conclusion of the Pediatrics paper, the researches wrote their results "highlight the need to develop interventions to quell the apparently growing concerns among parent about the safety and necessity of recommended childhood vaccines."