Accessibility links
Pharmacies Inject Convenience Into Flu Shot : Shots - Health News The majority of Americans still get their flu shot at the doctor's office, but an increasing number head to the pharmacy. Some pharmacies even offer the shots 24 hours a day. Nationwide, the number of pharmacists trained to deliver vaccines has nearly quadrupled since 2007. 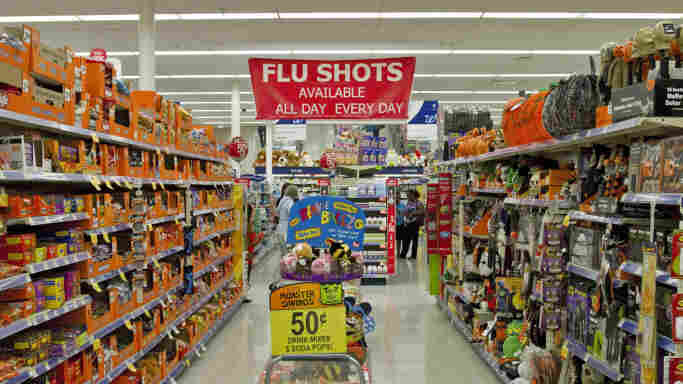 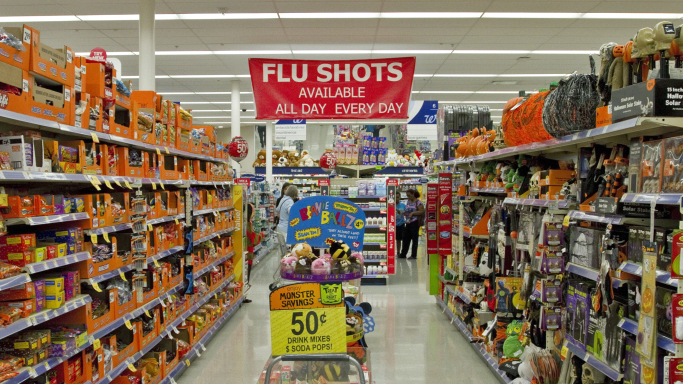 Drugstore and supermarket pharmacies across the country have launched a marketing blitz to attract flu shot customers, touting the convenience of stopping at a local drugstore and often offering drop-in vaccinations anytime the pharmacy is open — sometimes even 24 hours a day.

"If you decided at 4 o'clock in the morning you wanted to go out and had nothing better to do than get a flu shot, you could walk right in and you could get a flu shot," says Scott Gershman, pharmacy manager at a Walgreens drugstore in Springfield, Va.

Shelley Troff and her 13-year-old son dropped by Gershman's pharmacy one afternoon in September to get their annual shots. Troff says she didn't even consider going to her doctor's office. "To be frankly honest, Walgreens is easier," she explains. "Since this is one mile from my house and the clinic is 20 minutes from my house, this is where I come."

Pharmacies usually charge between $25 and $32, while a shot at the doctor's office generally costs at least $48, according to Matthew Davis, a pediatrician and associate professor at the University of Michigan in Ann Arbor. But for most people with insurance, it's really about convenience. That's because the shots are generally paid for by insurance.

Under the Affordable Care Act enacted in 2010, most insurers can no longer charge copays for preventive care, including flu shots. Some plans are exempt from that because they were grandfathered under the law.

The majority of Americans still get their flu shot at the doctor's office, but an increasing number head to the pharmacy. In 2010, 18.4 percent of adults who were immunized received the flu vaccine at a supermarket or drugstore, just edging out workplace vaccinations for the second most popular venue, according to the U.S. Centers for Disease Control and Prevention.

Pharmacists Trained To Give Vaccines

The H1N1 epidemic in 2009 helped propel the trend; the panic sent customers running to drugstores, which often had vaccines available after physicians' offices had run out. "It became clear to the government and Americans that pharmacies can provide easy access to vaccines," says Edith Rosato, senior vice president of the National Association of Chain Drug Stores.

But while more people are going to the pharmacy, the number of Americans who get the flu vaccine each year has remained fairly constant at about 40 percent of all adults.

Drugstores and supermarket pharmacies are eager to stake out a bigger piece of that market. Nationwide, the number of pharmacists trained to deliver vaccines has nearly quadrupled since 2007, from 40,000 to 150,000.

It is not clear how profitable the flu shot is to pharmacies, and experts' views on this differ. Revenue figures are proprietary, but Katherine Harris, a senior economist at the Rand Group who studies the vaccine market, says flu shots are not usually a big money-maker. They often involve taking time away from other duties to educate patients and bill insurers, she explains. Other analysts believe drugstores earn profits of 30 to 50 percent on the procedures, the Wall Street Journal reports.

But getting the flu vaccine at a pharmacy might not be right for everyone, particularly patients with chronic illnesses or for the uninsured. "If you're uninsured, go shopping," says Davis. He says the uninsured can often find a cheaper option at their local health department. The vaccine may even be free.