Accessibility links
Black Death And Modern Plague Microbes Nearly The Same : Shots - Health News While the results are a technical tour de force, the researchers did not find any genetic feature that could explain why the Black Death was so virulent. In fact, the germ behind the medieval plague isn't much different from the one that causes bubonic plague today. 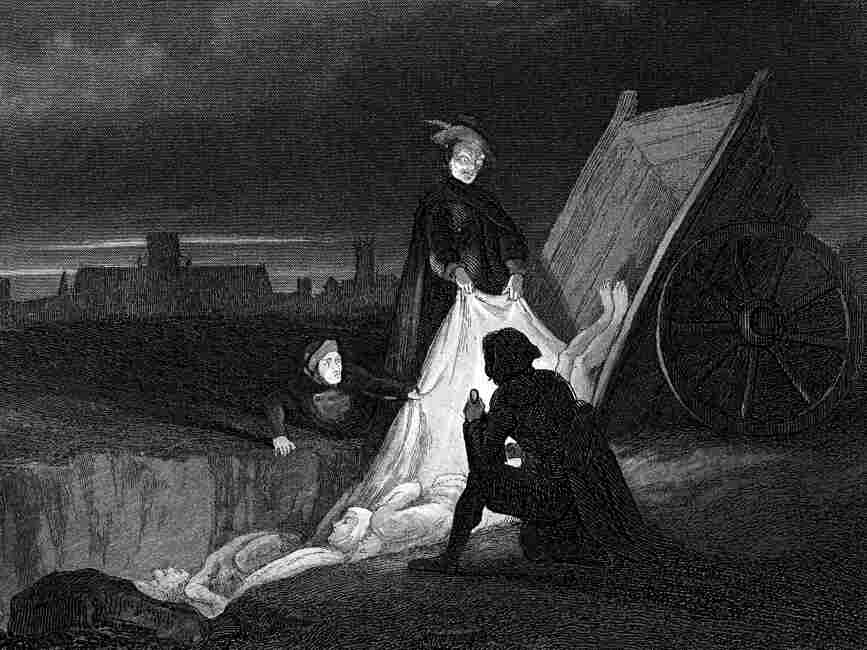 Victims of the plague are consigned to a communal burial during the Plague of London in 1665.

Scientists have used DNA lurking inside the teeth of medieval Black Death victims to figure out the entire genetic code of the deadly bacterium that swept across Europe more than 600 years ago, killing an estimated half of the population.

The researchers didn't find any genetic feature that could explain why the plague was so virulent, according to a report just published in the journal Nature.

"There is no smoking gun, so to speak, to say, 'Aha, we've found the one mutation which caused this tremendous virulence and now we know why it killed 50 million people.' We don't see that," says biological anthropologist Hendrik Poinar of McMaster University in Hamilton, Canada, who was on the research team.

He says the most likely explanation for the plague's devastation is that this rodent-infecting bacterium changed and struck humans for the first time right when the population of Europe was dealing with a cooling climate, poor crop production and filthy, crowded conditions.

Plus, people back then had no access to modern antibiotics and were likely weakened by other infections as well.

Poinar says the ancient Black Death DNA looks so similar to Yersinia pestis that still infects people today that researchers believe the medieval strain must be the ancestor of all modern strains.

That suggests this particular disease probably wasn't around centuries earlier and couldn't have caused the Plague of Justinian, another famous epidemic that devastated the Eastern Roman Empire in 541-542.

"More likely is that it was caused by another pathogen altogether that we haven't really considered yet," says Poinar.

In the past, other research groups have produced conflicting results when they've tried to detect Black Death bacteria in skeletal remains using less sensitive genetic tools. Some experts have argued that the famous plague might have been caused by a different disease, such as an Ebola-like virus.

This study used a newer, more robust genetic technique to fish out small bits of the ancient DNA from the dried powdery pulp hidden inside teeth taken from a Black Death cemetery in London.

"This is really the first ancient complete genome from skeletonized remains," says Poinar, who notes that scientists have sequenced the genes of the deadly 1918 flu virus, but that was from preserved tissue samples.

The Natural History Museum of Denmark's Thomas Gilbert is one of the scientists who tried to find plague DNA in Black Death victims in the past without success. He says the new technique used in this study is exciting and the analysis is compelling. "It's a great result. It looks very, very convincing," Gilbert says. "There's no reason why the data shouldn't be real."

But even if this has firmly established that plague bacteria caused the Black Death, Gilbert thinks the calculations that rule out its presence during the Justinian plague are open to question.

"I'm not completely convinced by that," says Gilbert. "The only way to find out what caused the Justinian plague is to do the same analysis on the Justinian samples, and I guess that's going to be the next attempt."

He says other groups have been working to use this same technique to probe for other diseases of historical interest. "What was unique about this paper is that they basically finished first and they did it on plague," says Gilbert. "But I know for example, people are doing it on tuberculosis, and people are doing it on all sorts of other things."

He says the insights that come from these studies will be of interest not only from a historical perspective, but also to help scientists understand how deadly epidemics have emerged in the past so that they can get ready for what might come in the future.