Accessibility links
After A Half-Million Cholera Cases, Vaccination Will Begin In Haiti : Shots - Health News The goal of the vaccinators isn't to stop cholera in its tracks. They can't do that in Haiti with only enough vaccine for 100,000 people. The aim is to show the world that vaccination against the illness can be done.

After A Half-Million Cholera Cases, Vaccination Will Begin In Haiti

After A Half-Million Cholera Cases, Vaccination Will Begin In Haiti 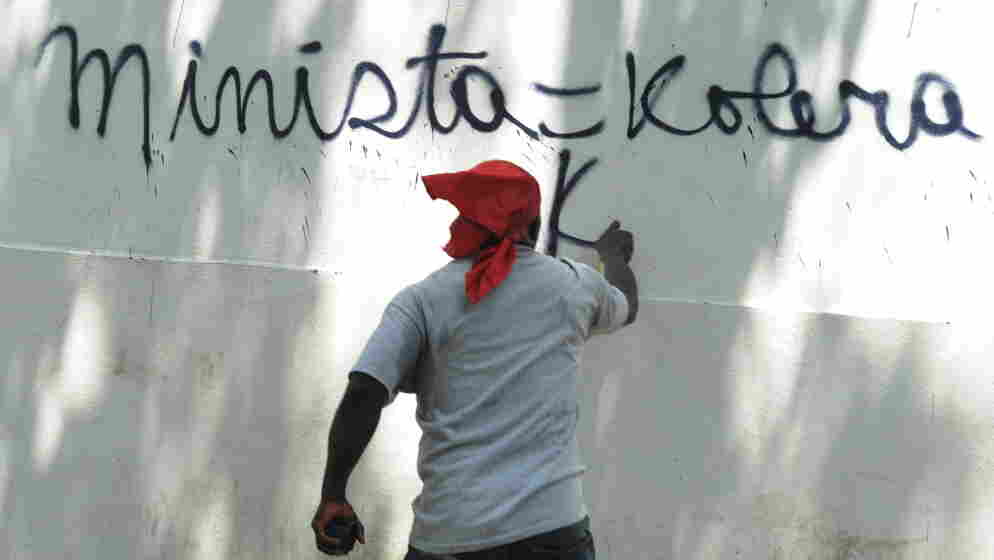 A Haitian protester in Port-au-Prince last month spray-paints a wall, equating the UN mission in Haiti (abbreviated here as MINISTA) with cholera. 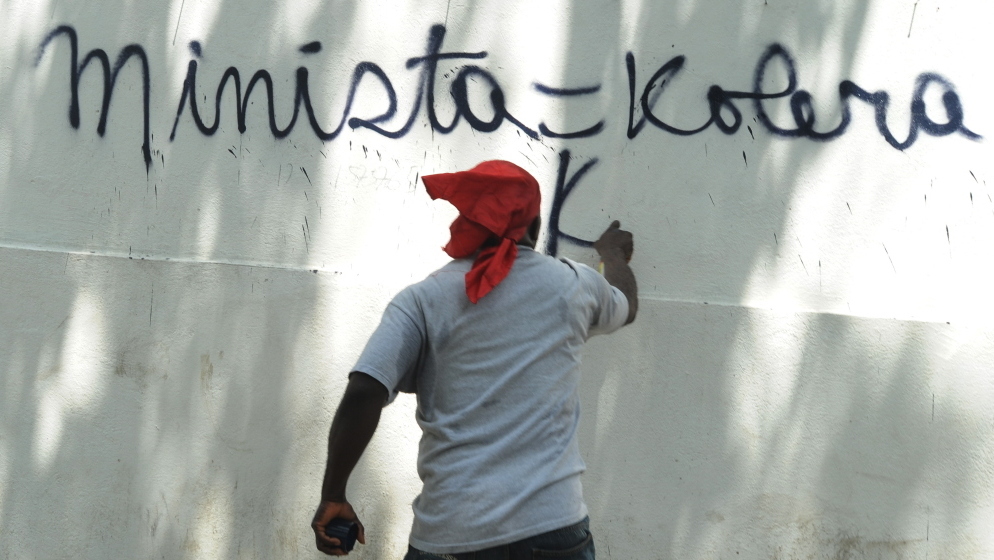 A Haitian protester in Port-au-Prince last month spray-paints a wall, equating the UN mission in Haiti (abbreviated here as MINISTA) with cholera.

A year after cholera burst upon earthquake-weary Haiti, plans are afoot to begin vaccinating people against the highly contagious disease.

Nearly half a million Haitians — about 5 percent of the population — have already been afflicted and more than 6,500 have died.

But the goal of the vaccinators isn't to stop cholera in its tracks. They can't do that in Haiti with just 200,000 doses — enough for only 100,000 people — that's all the manufacturer can offer.

The aim is to show the world that vaccination against the illness can be done.

"We believe we can do it. I have no doubt we can do it," says Dr. Louise Ivers of Boston-based Partners in Health, which has negotiated the purchase of cholera vaccine from Shantha, an Indian manufacturer, at $1.85 per dose, or $3.70 per person. (The other cholera vaccine, called Dukarol, costs almost twice as much, she says.)

"I believe the first step is to get started," Ivers says. "As we show success, we can use that experience not just to show it's possible but do it while strengthening the Haitian health care system."

Meanwhile, Dr. David Olson of Doctors Without Borders tells Shots that his group is considering its own cholera vaccination project in Haiti. It would involve several hundred thousand people in northern villages too remote for life-saving treatment to reach. "We think it's a good idea," Olson says.

Ivers says Partners in Health will start vaccinating early next year in two areas — an urban neighborhood in Port-au-Prince, in cooperation with a group called GHESKIO, and a rural village near St. Marc, in the region where the cholera outbreak began last October.

Skeptics abound, but their numbers appear to be dwindling.

Haiti's new president, former bad-boy pop singer Michel Martelly, is for cholera vaccination. His predecessor feared it would incite riots because there wouldn't be enough vaccine to go around. But now the Haitian Ministry of Health says it will soon vaccinate 100 people in a pilot test.

The World Health Organization and the Pan American Health Organization have apparently abandoned their earlier opposition. Ivers says the U.S. Centers for Disease Control and Prevention, formerly reluctant to support cholera vaccination in Haiti, may be having a change of heart.

The WHO quietly took one big step toward making it possible earlier this month by "pre-qualifying" an oral cholera vaccine called Shanchol, the one that Partners in Health will use. That long-awaited seal of approval opens the door to purchase of the vaccine by international agencies. It also makes governments willing to allow importation, and encourages the manufacturer to ratchet up production.

But this doesn't mean all is smooth sailing for cholera vaccination in Haiti. For one thing, there's the matter of who will pay for it.

You'd think a few hundred thousand dollars to launch a vaccination campaign against a big and growing disease threat wouldn't be a problem. After all, donor nations pledged $4.6 billion to help Haiti recover from the calamitous earthquake of January 12, 2010 – the biggest international relief effort ever.

Donna Barry of Partners in Health says nearly 60 percent of those funds, or $2.6 billion, remains to be disbursed.

But yesterday the group's founder Dr. Paul Farmer was in California beating the bushes to raise money for the vaccination campaign, "which I regard as somewhat ridiculous," he says. "We're not entirely pleased that we're going out on a limb, looking for funding that should have been made available very quickly."

Farmer, who is U.N. deputy special envoy to Haiti, pointedly noted that the "so-called international community is associated with the introduction of cholera" to Haiti. All evidence points to U.N. peacekeeping forces from Nepal as the likely source of cholera in Haiti, which had been free of the disease for a century even as it colonized the rest of the hemisphere.

Apart from funding, there's a lot else that's uncertain about vaccinating Haitians against cholera.

For starters, there may be resentment among those who can't get the vaccine. Ivers says this will take careful explanation so that people understand there just isn't enough vaccine for everyone yet. And everybody (vaccinated or not) needs to keep taking precautions against cholera infection.

Then there's the big question of whether and how fast the maker of Shanchol will gear up to make more.

"What I'm afraid of now is there will be competition for the limited amount of vaccine available in the next six months," says Olson of Doctors Without Borders.

The WHO estimates there are up to 5 million annual cases of cholera worldwide, and maybe 130,000 deaths. And currently cholera epidemics are raging in Angola and Zimbabwe as well as Haiti. Still, there's no global stockpile of cholera vaccine — something Farmer and other advocates are pushing for.

Meanwhile, the augurs are not good for Haiti's ability to control cholera anytime soon.

Partners in Health's Barry says new figures from the U.N. Office for Coordination of Humanitarian Affairs show an alarming backslide in access to clean drinking water and sanitation in the displaced persons camps in Port-au-Prince.

In March, about half the camp residents had access to safe water. Now only 7 percent do.