Accessibility links
Big-Name Drugs Are Falling Off The 'Patent Cliff' : Shots - Health News Dozens of popular high-end pharmaceuticals — from Lipitor to Nexium to Plavix — are going off-patent in the coming months and years. That will lead to a big drop in drug costs. But analysts say that could be offset by a price increase in other areas. 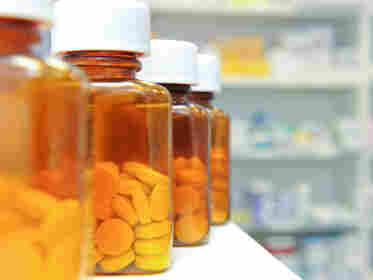 Some of the most popular and expensive brand-name drugs are about to go generic.

Take Lipitor, for example. In November, the heart drug comes off-patent — and by next June, there are likely to be multiple generic versions.

With almost $11 billion in sales last year, it's the largest blockbuster to fall off what analysts call the "patent cliff." And it's just one of dozens of popular high-end pharmaceuticals whose prices are expected to plummet in the coming years, including drugs like Plavix (for heart disease), Seroquel (used to treat depression) and Nexium (for digestive problems.)

Patients often pay more for name-brand drugs, even when they're covered by insurance. Sometimes they have no choice because — unlike Lipitor — many drugs don't yet have generic competition.

Howard Weintraub, a cardiologist at New York University, says many patients on those drugs come in and beg for free samples. Others simply don't fill their prescriptions — or they do, but then try to stretch their resources by taking the pricey pills less often than they're supposed to.

"People come in with their blood pressure not as well controlled, or they come in and their cholesterol's all of a sudden mysteriously higher. And you realize, OK, the medicine hasn't stopped working, but you also realize the medicine doesn't work when it's still in the bottle," he says.

Generics already represent 70 to 80 percent of drug sales — a dominance expected to grow in the future. Michael Kleinrock, of marketing research firm IMS Health, says patent expirations over the last half-decade are one of the main reasons why Medicare spent $50 billion less than federal officials projected five years earlier. Kleinrock says the average daily cost of drugs dropped one-third from 2005 to 2010, and should drop another third between now and 2015.

"We're already at reasonably low cost relative to 10 years ago or so," he adds. "That said, there's still actually more to go, which is excellent for consumers."

The drop in drug costs because of generics is one of the few bright spots in all of American health care. But it isn't exactly a big bright spot.

"For sure it will be felt, but because the other things are on such a heavy rise, it will only temper where rates are currently," says Dr. Dennis Liotta, the head of pharmaceutical benefits for Emblem Health, one of New York's largest insurers.

Liotta says the generic drug savings is significant and especially visible to people with limited means and limited health coverage. But drugs are a relatively small factor in insurance premiums. And while blockbuster drugs like Lipitor are sunsetting, University of Michigan business school professor Erik Gordon says pharmaceutical companies are trying to replace them with new, more targeted drugs — like Pfizer's recently approved lung-cancer medication.

Some analysts say the growing field of costly specialty drugs could undermine the growing savings from generics. But Gordon says drug companies will still have their work cut out for them. It's getting tougher not only to come up with new drugs, he says, but also to convince insurers and the government to pay for them — unless they make meaningful improvements in health, at a reasonable cost.

Fred Mogul is a reporter for WNYC.