Accessibility links
Exhibitors Strut Offbeat Wares At Public Health Confab : Shots - Health News Need a plush pancreas or spleen? How about a T-shirt featuring a liver? Yes, there's a company selling those and more. And the goods are on display at the annual meeting of the American Public Health Association. 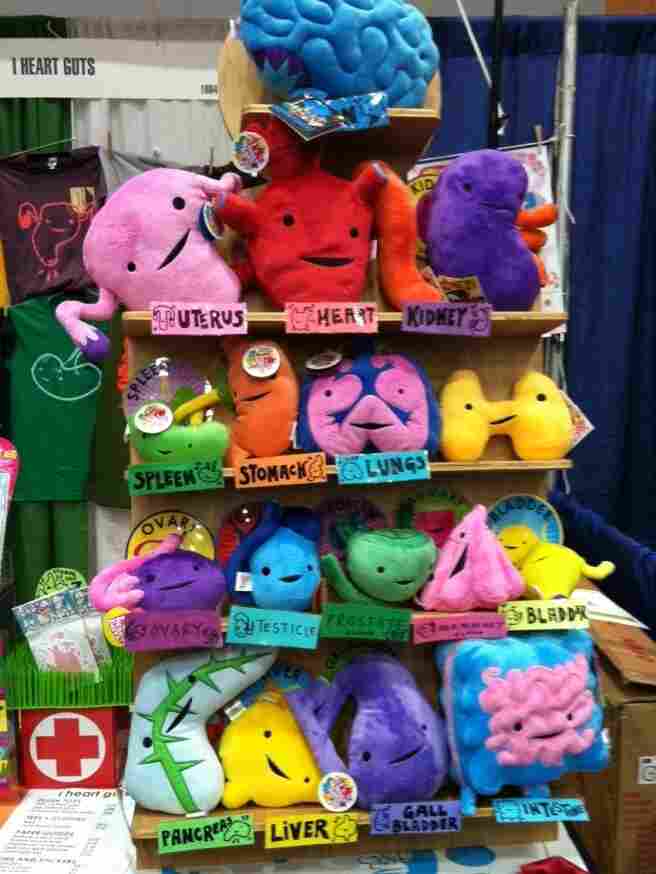 If you have a soft spot for internal organs, then you'll love these plush hearts, ovaries and intestines. 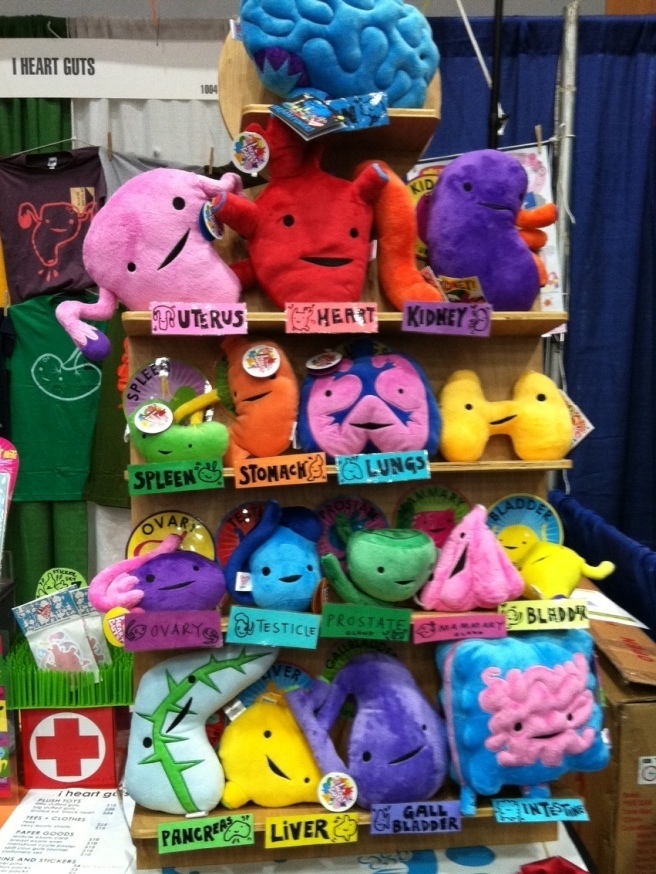 If you have a soft spot for internal organs, then you'll love these plush hearts, ovaries and intestines.

At the heart of every convention worth its salt is the exhibit hall. But only at the American Public Health Association annual meeting can you find a plush heart for sale. Along with stuffed spleens, brains and uteruses.

And you know the game where you guess how many candies are in a jar and win something cool? Well, at the APHA meeting, the anti-tobacco American Legacy Foundation is giving away a new Kindle, if you can guess how many cigarette butts are in a huge jar.

The butts, by the way, were collected by staff members from a single block in downtown Washington, D.C., where the meeting is taking place now. The butt-counting contest is part of the group's effort to publicize the environmental destruction caused by the unsmoked ends of cigarettes.

There's the more serious, if still a little weird, stuff, too. Take Glo Germ, a fake gel or spray-based germ that shows up only under a special UV flashlight (sold separately!). Public health educators can use the glowing goo to show schoolchildren — or adults in need of remedial help — how easily germs can be spread on a pen or clipboard, or how many germs typical hand-washing or sanitizing leave behind.

And speaking of teachers, the nice folks at Health Edco will sell you all manner of props to help demonstrate in the grossest possible terms why you should live a healthful lifestyle. Everything from Mr. Gross Mouth, who shows what happens when you use chewing tobacco, to Splat, a game that illustrates, using an egg inside a plastic skull, why kids should wear helmets when biking or skateboarding.

But what about about those plush organs? They're among the featured merchandise at a booth sponsored by the business I Heart Guts, owned by Wendy Bryan of Takoma Park, Maryland.

Bryan, an illustrator by training, said she started the business by accident. "I was very brokenhearted and I was drawing a lot of sad hearts and I was drinking and smoking a lot so there were sad livers, sad lungs," she tells Shots.

She eventually made happy organs, and pitched the designs to a T-shirt company she was already designing for. But they declined, saying, "Wendy that is so weird we can't buy it from you." So she did it on her own.

Bryan says what started out as "almost a joke" grew due to customer demand. "People would write in and say, 'My girlfriend's having her second liver transplant, you need to have a liver shirt,' or 'My wife is an OB-GYN, why don't you have a uterus shirt?' " she says.

And it didn't stop there. "Somebody would donate a kidney to their mom, and so we added kidney shirts and liver shirts and intestine shirts and gallbladder shirts," she says. "And then people started asking for plush toys, so we really were based very much on the demand of our very strange customers who want plush spleens or pancreases or whatever."

Apparently there are a growing number of those "strange customers." Bryan's wares are now available in 19 states and nine countries, including the shop at the Tate St. Ives art museum in Cornwall, England.