Accessibility links
Second Thoughts On Medication For Babies Who Spit Up : Shots - Health News Even though some popular heartburn medicines haven't been approved to treat babies, the medicines are being prescribed as a remedy for spitting up. Another option: modifying Mom's diet to make her breast milk more palatable. 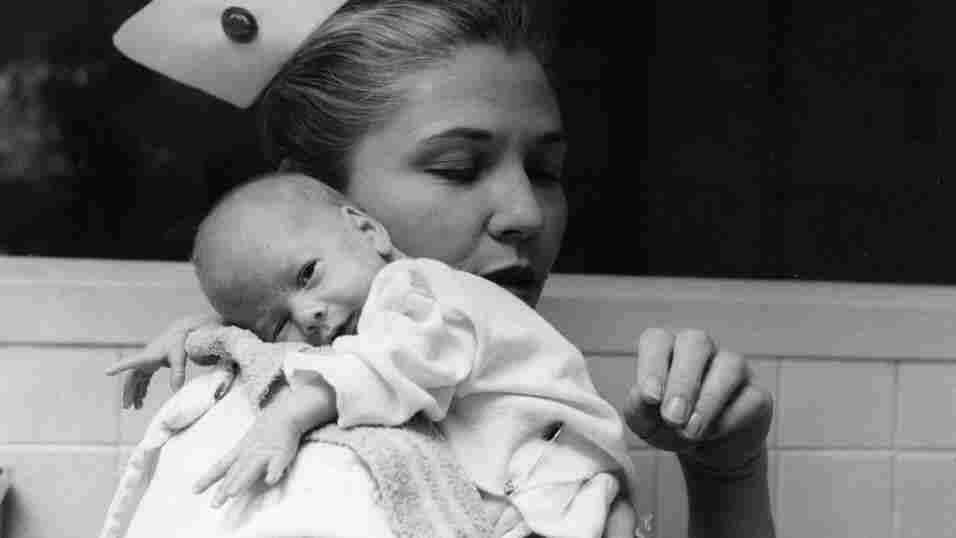 A nurse burps a baby after he's been fed, circa 1955. Doctors say that for babies with extreme reflux, off-label use of heartburn drugs can sometimes help. But frequently changes to the mother's diet can be a simpler fix. George Heyer/Three Lions/Getty Images hide caption 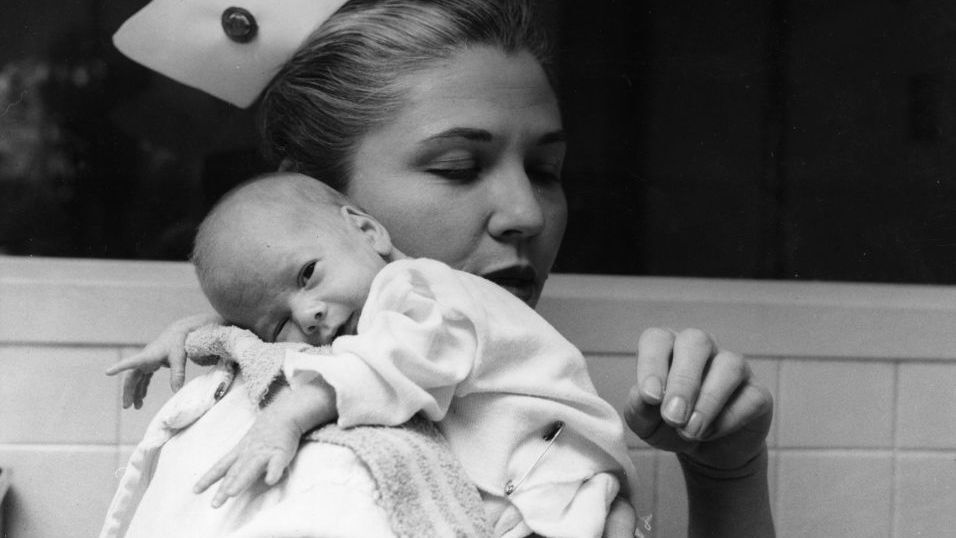 A nurse burps a baby after he's been fed, circa 1955. Doctors say that for babies with extreme reflux, off-label use of heartburn drugs can sometimes help. But frequently changes to the mother's diet can be a simpler fix.

Babies have been crying and spitting up since time immemorial. But these days many parents ask: Isn't there a drug for that?

Prescriptions for acid-suppressing medicines for infants have increased dramatically. Hassall says some parents have picked up on the idea that heavily advertised medicines for reflux in adults can help fussy babies who spit up a lot.

These medicines aren't approved for infants with reflux, or GERD. Still, some doctors have been prescribing them off-label anyway. Doctors generally agree this practice is OK when babies really need the medicine, such as when they're spitting up so much that they're not gaining weight.

"The great majority of infants spit up and cry," says Hassall. "But very, very few of them actually have reflux disease and deserve medication." Hassall has researched the effectiveness of the drugs and has received clinical study grants from AstraZeneca, the maker of the popular acid-suppressing medicine Nexium.

The results of four clinical trials show that these medicines work no better than a placebo in treating infants with reflux. "My point is that there hasn't been a sudden 16-fold increase in the incidence of reflux disease," says Hassall. "It hasn't suddenly become the scourge of otherwise healthy infants."

Hassall recommends dietary changes to the parents of inconsolable babies who spit up after feedings. This strategy has helped many of his patients, including Tara Cree of Vancouver, British Columbia, who had a rough go with her daughter.

"She was incredibly irritable," recalls Cree. "There was a lot of crying and it just didn't seem right."

The worst of it came just after breast-feedings. When she described the symptoms to Hassall, he told Cree to change her diet to remove certain proteins from her breast milk.

"I eliminated dairy, soy and wheat from my diet," Cree says. It was a radical change, since almost all processed foods include some dairy, soy or wheat. But she stuck with it because it was so effective. "By day 3 or 4 [of the diet] she was a different baby," says Cree.

Now, not every baby will get the same relief from a mother's diet change, or by switching to a nondairy baby formula. But Hassall says it's a good approach to try before turning to medication.

Specialists in pediatric gastroenterology have guidelines to help educate pediatricians and families on the treatment of reflux. "There are infants who do benefit from these drugs," says Benjamin Gold, a gastroenterologist in Atlanta, who has been a paid consultant to AstraZeneca. "It's a small proportion," he says.

But he says with all the discussion about the escalation in prescriptions, he doesn't want parents to get the wrong message. "We have to be careful that we don't swing the pendulum back the other way by saying, 'Oh, these drugs are all bad.' "

Gold says what's needed are better diagnostic tools to determine which babies truly need the medicine — and that will require more research. For now, he says, sometimes you have to try a baby on the medicine.

"The problem is we can't determine [in advance] which children are going to benefit and which are not," Gold says.

Advisers to the FDA have been looking at this issue. They say the limited data in infants suggest that the medicines are fairly safe, but there are reports of intestinal inflammation, and one study found a slightly increased risk of pneumonia.

The upshot, according to the their review, is that the medicines should be reserved for infants who've been diagnosed with serous problems, such as erosive esophagitis — a condition that afflicts relatively few babies.