Accessibility links
'Personhood' Divides Anti-Abortion Groups : Shots - Health News Some foes of abortion haven't supported efforts to define legal personhood as beginning with the fertilization of a human egg because of concerns about unintended consequences. 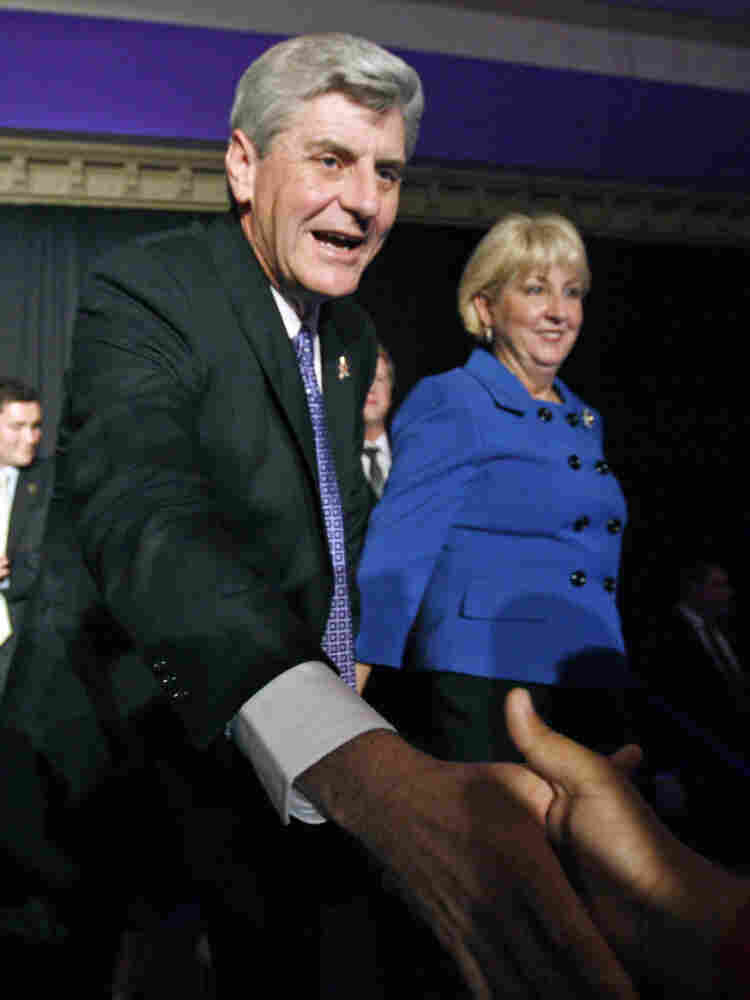 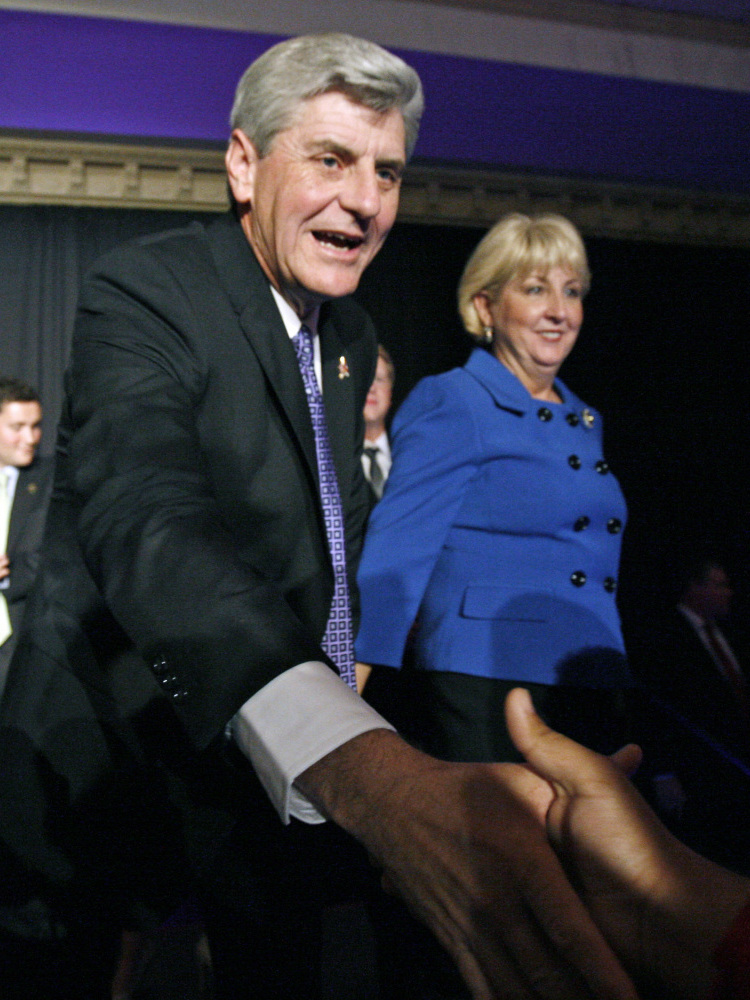 Wife Deborah Bryant waits as Mississippi Governor-elect Phil Bryant thanks a supporter Tuesday at a victory party. Bryant supported a controversial amendment to the state's constitution on "personhood."

Voters in Mississippi were expected to make it the first state to confer protected legal status to fertilized human eggs Tuesday. Instead, they made it the second state to reject a so-called personhood amendment to its constitution.

One possible reason is that the effort divides even those who consider themselves against abortion.

For example, the state's Republican lieutenant governor — now governor-elect — Phil Bryant, campaigned hard for the measure. "We're saying this child, once conceived, will have an opportunity to have the same rights as you and I," he said in one television ad.

But at the same time, Haley Barbour, the even more popular outgoing Republican governor, was doing television interviews expressing doubts about the measure.

"I believe life begins at conception," he told MSNBC. "Unfortunately this personhood amendment doesn't say that. It says that life begins at fertilization, cloning, or the functional equivalent thereof. That ambiguity is striking a lot of pro-life people here as concerning."

Barbour later said he voted for the amendment. But it seems that many other anti-abortion voters didn't. With nearly all the votes in, it failed by a hefty 16-percentage-point margin.

Freda Bush, a Jackson, Miss., OB-GYN who unsuccessfully helped push the amendment, said she thought the measure's opponents prevailed by confusing voters. "The what-ifs, possibilities, it raised just enough doubt in the people's minds that even pro-life people who know it's a baby were thinking differently," she told a reporter from Mississippi Public Broadcasting.

Those what-ifs include requiring women with life-threatening illnesses to continue their pregnancies, since the amendment would have allowed no exceptions to what would be an absolute ban on abortion.

Other possibilities included bans on certain forms of birth control that can prevent the implantation of a fertilized egg, like the IUD and some formulations of the pill.

But it's not just voters in Mississippi who have serious doubts about the strategy of giving legal status to fertilized human eggs. "The 'personhood' amendment is a gimmick that wastes money and harms pro-life candidates," wrote Phyllis Schlafly, president of the Eagle Forum, a prominent anti-abortion group.

Schlafly says the problem is that such a proposal tends to inflame opponents, who then turn out to vote and take down other candidates as well. "A losing ballot initiative hurts candidates on its side because, when voters vote against the initiative, they typically vote against the candidates linked to it by the liberal media," Schlafly wrote.

Other anti-abortion activists cite other problems with the personhood strategy. "It's not only a waste of time, but potentially very dangerous," said James Bopp Jr., general counsel for the National Right to Life Committee, one of the nation's oldest and largest anti-abortion groups.

Bopp says that while he agrees with the goal of declaring fertilized eggs people, that can only be accomplished after the Supreme Court strikes down Roe v. Wade, the ruling that currently makes most abortions legal nationwide.

If a personhood amendment like the one in Mississippi were to pass and reach the Supreme Court now, he said, "courts will readily strike it down, but furthermore it's dangerous because the [Supreme] Court has also indicated an interest in reformulating the right to abortion to make it even more extreme."

Bopp said he could see a situation in which five justices could end up reaffirming Roe in an even broader way, which "would mean that all current restrictions on abortion such as limiting funding or informed consent ... or parental notice — would be unconstitutional. So that would be a real major setback for the pro-life movement."

But fellow anti-abortion lawyer Matt Staver doubts that would happen. Staver says the Supreme Court's swing abortion vote, Justice Anthony Kennedy, has gone both ways on the issue in recent years. "So I can't really predict which way he's going to go at the end of the day, and I can't predict who's going to be on the court when this gets there, but what I can say is that this is, in my view, the right strategy," Staver says.

Meanwhile, backers of the Mississippi amendment say they'll press forward, trying again in that state and others as well. "We're not going to be defined by one election," said Jennifer Mason, communications director for the group Personhood USA. "As long as human beings are being treated as property, we will continue to ensure that they get personhood rights, that those rights are recognized, just as the rest of us enjoy."

The group is working to get similar amendments on the ballot in as many as a dozen other states in 2012.