Accessibility links
Wal-Mart's Clarification On Health Care Leaves Room For Big Moves : Shots - Health News Even after downplaying some parts of a document requesting partners for future health care ventures, Wal-Mart's ambitions to do something bigger in providing medial services in its stores remains clear. The company is seeking help in managing chronic health conditions — from asthma to osteoporosis — that are among the most prevalent problems in the U.S. 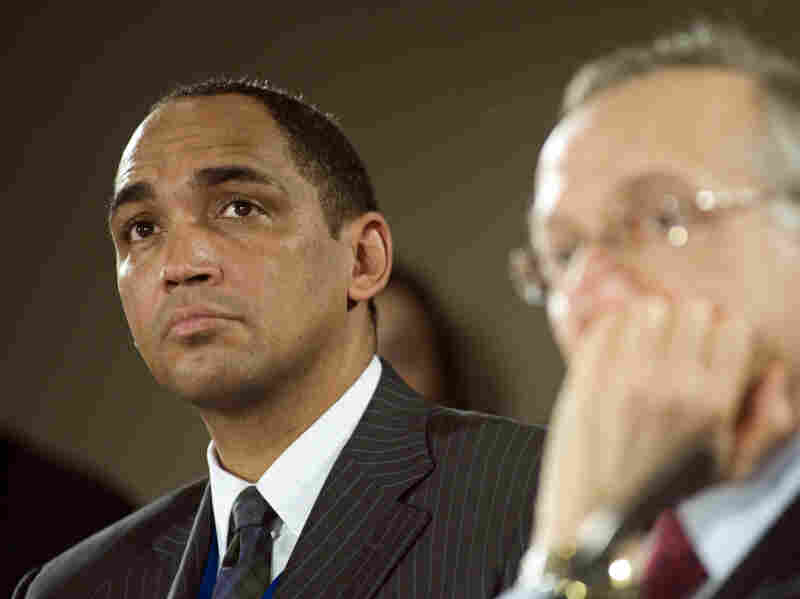 Wal-Mart's Dr. John Agwunobi (left) said in a statement that the company won't be "building a national, integrated, low-cost primary care health care platform." Even so, the leaves plenty of room for the retailer to pursue an expansion of health care services at its stores. Cliff Owen/AP hide caption 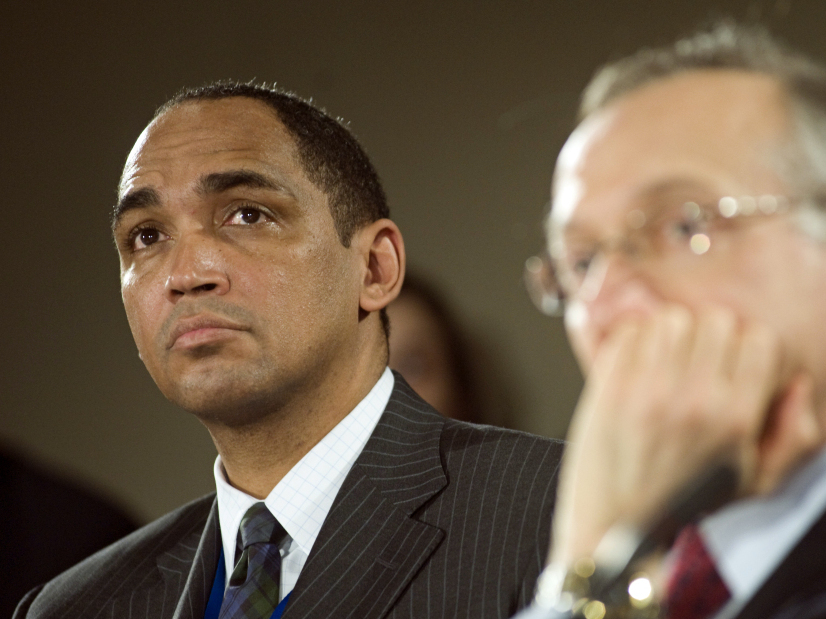 Wal-Mart's Dr. John Agwunobi (left) said in a statement that the company won't be "building a national, integrated, low-cost primary care health care platform." Even so, the leaves plenty of room for the retailer to pursue an expansion of health care services at its stores.

After NPR and Kaiser Health News reported yesterday on Wal-Mart's plans to become a big provider of primary care in the U.S., the retailer said its document that served as an invitation to partners for the effort was "overwritten and incorrect."

To be clear, the retailer never disputed the authenticity of the document. And when contacted before the story ran, company spokeswoman Tara Raddohl declined to discuss the specifics or characterize it beyond saying it was an effort to determine "strategic next steps."

So exactly which parts of the document aren't right? Kaiser's Julie Appleby asked Raddohl late Wednesday. She told Appleby the incorrect part was the one about intent, which kicked off the request for partnership proposals.

Here's that section, if you missed it:

This Request for Information (RFI) is being sent to potential vendors who currently have products or services that may address all or part of the requirements associated with Walmart's strategic direction. Walmart intends to build a national, integrated, low-cost primary care healthcare platform that will providepreventative and chronic care services that are currently out of reach for millions of Americans. Walmart intends to do this in an affordable and accessible way while maintaining or improving quality outcomes. Walmart seeks partners who have a care model or capability that can help dramatically drive down the costof care, while maintaining or improving quality on a national level.

It's not as clear which parts of the document Wal-Mart thinks are "overwritten."

Yesterday's statement from Wal-Mart's Dr. John Agwunobi, head of health and wellness, did say what the company doesn't want to do: "We are not building a national, integrated, low-cost primary care health care platform."

That sounds like a straw man, though. Just about anything less than a total transformation of the country's health care system wouldn't violate that statement. Even the controversial federal law overhauling health care doesn't do that.

Imagine, for instance, if Wal-Mart pursues regionally organized low-cost primary care services offered in partnerships with hospitals or health systems? That's doable and would be more consistent with the way health care is already structured in the U.S. And Wal-Mart has already done something like that by leasing space in some stores to hospital systems.

Simply adding more in-store clinics that offer more sophisticated services would be another way to go.

So even with the public provisos about the document, Wal-Mart's ambitions to do something bigger in health care remain pretty clear. The company is looking for help managing chronic health conditions — from asthma to osteoporosis — that are among the most prevalent problems in the U.S. Other services might include some common lab tests, including PSA, and physical exams.

Wal-Mart hasn't said to whom it sent the request for proposals. And it may well be that the responses Wal-Mart gets will guide its ultimate strategy. "It's a fishing expedition," consultant Adam Fein told The Wall Street Journal. "Wal-Mart knows where the money is," he said. "It's not in HDTVs. Over time, it's going to be in health care."