Accessibility links
Song Contest Aims To Spur Frank Talk About Teen Drug Abuse : Shots - Health News Teen musicians whose lives have been changed by substance abuse get a chance to tell their stories through song. Winning numbers become part of a campaign against drugs. The songwriters get to go backstage for a rehearsal of the 2012 Grammy awards. 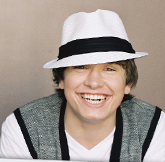 Research that found a third of popular songs contain drug references, led to headlines like, "Study: Music Has Drug References, Pope Is Catholic" a few years back.

Drugs and music. The two just seem to go together. Often, though, in a more tragic way than artists would like to let on. Compare Amy Winehouse's defiant lyrics to her reality: the singer who said "no, no, no" to rehab lost her very public struggle with alcohol last summer.

There are countless other examples. But some artists and organizations aren't content with the status quo.

The National Institute on Drug Abuse has teamed up with MusiCares and the Grammy Foundation to sponsor a music contest to raise teen awareness of substance abuse.

The result is a series of honest, heartbreaking and hopeful songs from young people whose lives had been altered by substance abuse and addiction.

Unlike motivational speakers and celebrities, who have usually already slain their demons and are talking about their drug use in retrospect, these young people are sharing their stories from the thick of things.

When the winners were named recently, the top songwriting team was identified only as Harvie and Amanda. Both are currently in treatment, and their full names won't be released until they finish their program.

"The winning song reflects the hope that treatment brings, especially to young people who have so much potential to change their life course," NIDA Director Nora Volkow said in a statement. "This songwriting team brought incredible emotion to their personal journey that hopefully will encourage others to seek treatment for substance abuse problems."

Kevin Simmons, who took second place, also wrote his composition during a stay in a rehabilitation center. His rap number My Life chronicles a drug habit that started in fifth grade and landed Simmons in both jail and rehab by the time he was in high school.

Creative endeavors can be an important outlet for those trying to overcome an addiction, and the strategy also works for those dealing with a loved one's addiction.

Fifteen-year-old Grant Davis has been involved in music for 5 years. He took up singing when his sister's drug use started taking over his family life. "I needed a way to cope," Davis told Shots.

Last year, he tried his hand at songwriting. His first effort, "Just a Child" won third place in this year's contest.

Davis said that before he wrote the song, he was struggling to understand his sister's addiction and why she couldn't just get better. The song was an exercise in seeing things from her point of view and realizing how much of a battle she faced.

The song became a collaborative project, with many members of the family and others who knew Davis' sister contributing and shaping the lyrics. As he asked for help with his musical endeavor, Davis was also reaching out to his family and friends and opening up more communication between them. "It was my first real song," Davis told Shots. "I wanted to make sure that it was good enough for me and for my sister."

When asked about the message behind his song, Davis said "drugs take away your dreams and take all control. You have no choice any longer."

His advice to other teens? It's important to find an expressive outlet, a way to cope with substance abuse, whether it's your own, or that of a family member. "It's a place where you can find peace," Davis said of music.

All the contest winners will get to go backstage during the rehearsals for the Grammy awards next February, and their songs will be aired on various websites including Grammy 365, MTV, and the Above the Influence Campaign.