Accessibility links
Why Brain Injuries Are More Common In Preemies : Shots - Health News Each year more than 60,000 babies are born weighing less than 3.3 pounds. As scientists learn more about how brain injuries occur among these very premature infants, it could point the way to possible prevention and repair strategies. 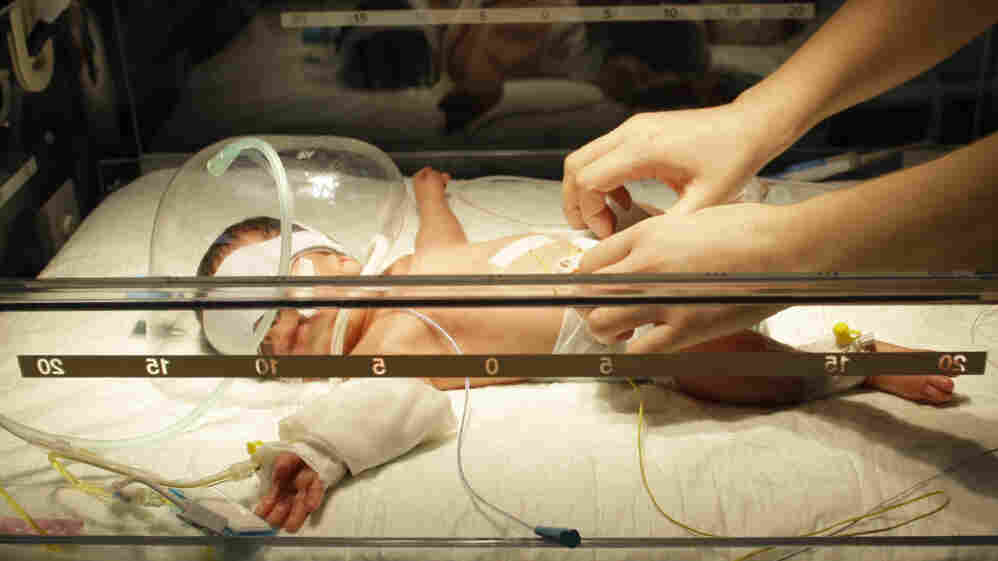 The most common cause of brain injury in premature infants is a lack of oxygen in the days and weeks after birth, researchers say. Ibrahim Usta/AP hide caption

Scientists say they are beginning to understand why brain injuries are so common in very premature infants — and they are coming up with strategies to prevent or repair these injuries.

The advances could eventually help reduce the number of premature babies who develop cerebral palsy, epilepsy or behavioral disorders such as ADHD, researchers told the Society for Neuroscience meeting in Washington, D.C., this week.

Each year more than 60,000 babies are born weighing less than 3.3 pounds. And because of advances in neonatal medicine over the past several decades, most of those babies will survive. But researchers have had less success finding ways to prevent brain damage in these infants.

"That means that overall rates of cerebral palsy and other neurodevelopmental disabilities are on the rise," says David Rowitch, chief of neonatology at the University of California, San Francisco.

The most common cause of brain injury in premature infants is a lack of oxygen in the days and weeks after birth, Rowitch says. The lack of oxygen damages white matter, which provides the "communication highways" that carry messages around the brain and to distant parts of the body, he says.

And the babies at greatest risk of this sort of brain damage are those born after as little as six months of gestation, Rowitch says.

"Such a baby would weigh about a pound and would fit into the palm of your hand," he says. "As you can imagine, they're very fragile and vulnerable to stresses."

Those stresses often include periods when an infant's immature lungs are not delivering enough oxygen to the brain, even with help from a mechanical breathing device.

This lack of oxygen appears to damage the most common type of white matter, myelin, which acts like an insulator around the nerve fibers that carry messages in the brain and nervous system. Without enough myelin, short circuits can prevent these messages from getting through, Rowitch says.

He initially found evidence of white matter damage by studying brains from premature infants who died. But since then, he's been able to assess premature infants using a special incubator designed to fit in an MRI scanner.

"We've been able to now take over 250 babies who are very preterm to the MRI scanner safely to show that this is a feasible way to detect white matter injury early on," he says.

Now the question is how to prevent or repair that sort of injury.

Some studies show that it's important to act right away, says Vittorio Gallo from Children's National Medical Center in Washington, D.C.

Gallo is part of a team of scientists who have shown that it is possible to intervene — at least in mice. One approach involves giving the mice a drug that speeds up production of myelin, he says.

Any drug for people is still years off, Gallo says

But other scientists at the meeting say there are promising treatments available now. These include everything from the magnetic stimulation of certain areas of the brain to temporarily lowering the body temperature of premature infants to protect brain tissue.

And if any of the approaches work, the benefits are likely to extend far beyond infants, says Mark Goldberg of UT Southwestern Medical Center in Dallas.