Accessibility links
Gingrich's History On Health Care Gets An Exam : Shots - Health News Some of the positions Gingrich took while at the helm of a health care think tank are getting another look. Ideas such as an insurance mandate and incentives to spur the use of computerized medical records are planks of the Democrats' health overhaul law. 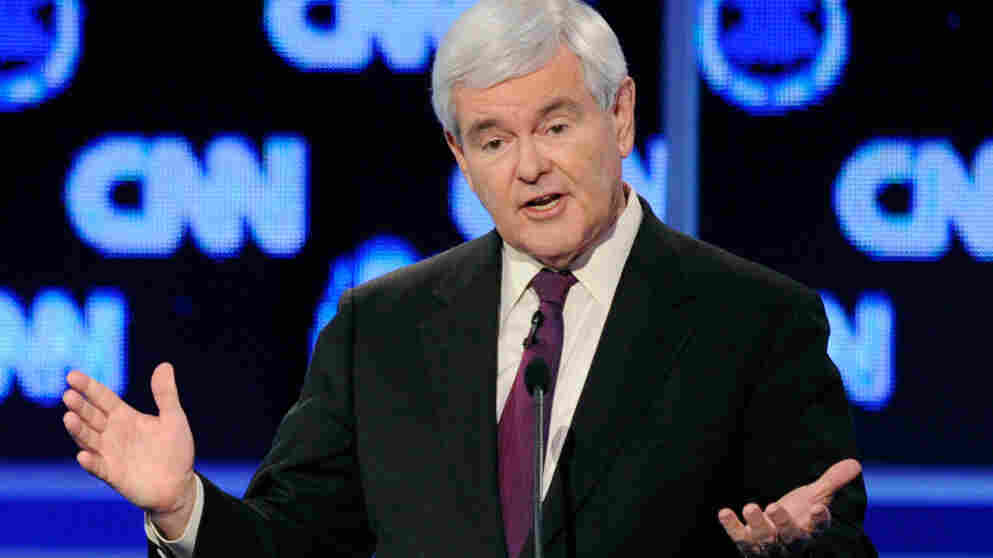 At a Republican presidential debate in Las Vegas last month, Newt Gingrich got zinged by rival Mitt Romney for coming up with idea of an individual insurance mandate. Ethan Miller/Getty Images hide caption 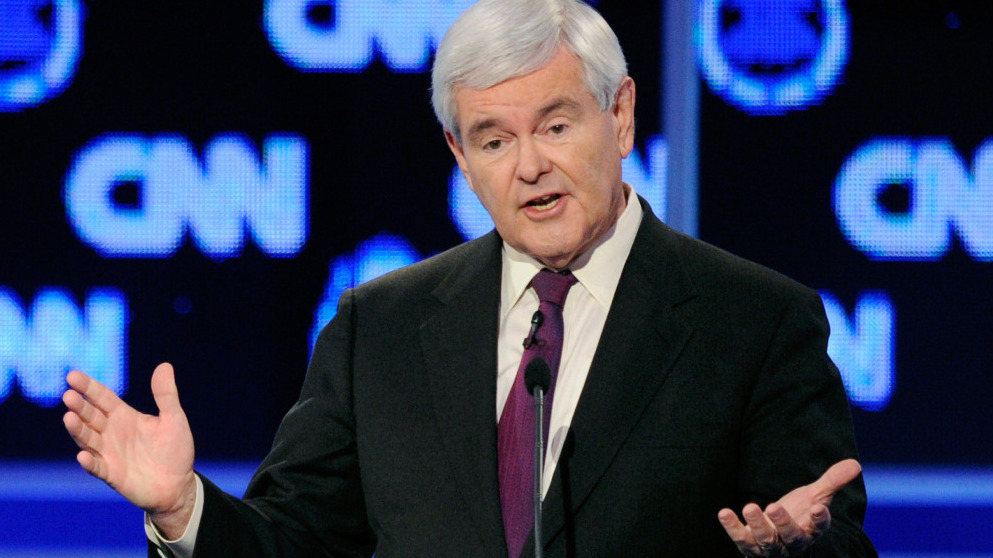 At a Republican presidential debate in Las Vegas last month, Newt Gingrich got zinged by rival Mitt Romney for coming up with idea of an individual insurance mandate.

Republican Newt Gingrich's presidential stock is rising in the polls. And his newfound popularity is also bringing new scrutiny to what he's been up to since he stepped down as Speaker of the House in 1998.

But in addition to the money, some of the positions Gingrich took while at the organization's helm are raising eyebrows.

What exactly did the Center for Health Transformation want to transform? Well, moving the nation's system from paper to electronic health records to save money and reduce medical errors has long been one of Gingrich's signature issues.

"I think having an electronic health record will be less expensive by a big margin than having paper records, and it's a simple fact that paper kills," he said on NPR's Talk of the Nation in 2005. "So I'm in favor of using modern technology to provide better services at lower cost."

Actually, Newt, we got the idea of an individual mandate from you.

By the way, that's also a goal of last year's health law — the one Gingrich and every other GOP presidential hopeful wants to repeal. The 2009 stimulus bill, which preceded the health law, included $19 billion to help pay to computerize health records.

Then there's that requirement for most Americans to have health insurance — the one Republicans now claim is unconstitutional.

Gingrich sparred over the issue last month at a debate in Las Vegas with former Massachusetts Governor Mitt Romney, the man he's now battling with for first place in the polls. Romney signed a 2006 law that required most residents of his state to either have insurance or else pay a tax penalty.

"There's a lot of big government behind Romneycare; not as much as Obamacare, but a heck of a lot more than your campaign is admitting," said Gingrich.

Romney shot back, "Actually, Newt, we got the idea of an individual mandate from you."

To which Gingrich responded, "That's not true. You got it from the Heritage Foundation," a conservative think tank some credit with originating the idea.

Indeed, wherever Gingrich got the idea, he was happy to tout it in that 2005 Talk of the Nation appearance.

"Our goal has to be for 100 percent of the country to be in the insurance system," he said. "So that means finding ways through tax credits and through vouchers so that every American can buy insurance including, I think, a requirement that if you're above a certain level of income you have to either have insurance or post a bond."

Indeed, while the former speaker is facing scrutiny for the millions he's earned since leaving public office, in the end, it may be his words, not his money, that give voters pause.